On July 7th, we had a visit from the Minister for Environment, Climate and Energy from the German state of Baden-Wuerttemberg, which is the home state of SAP’s headquarter.

After ending his visit at TESLA across the street and before proceeding to meet with Governor Jerry Brown, Mr. Untersteller and his delegation came to SAP Labs for an update on SAP and its sustainability strategy.

The group was very interested in SAP’s dual strategy (Exemplar and Enabler) in this space, and we discussed various aspects in detail. Raquel Fanucchi from our facilities group ended the visits by giving a campus tour.

Because of their high interest level and the shortness of time, I was invited to re-join at the German consulate the next evening to continue the discussion.

For me personally it was very interesting to learn that my ‘old’ home state clearly has a leadership role when it comes to sustainability, similar to California leading in US.

Baden-Wuerttemberg has very ambitious CO2 reduction targets, and plans to raise the amount of renewable energy resources from currently 22.9% to 38% in the next 6 years. Next to abandoning nuclear power altogether by 2022. And for the first time ever in Germany, production of renewables (81 terra watt hours) overtook production of coal energy (69,7 terra watt hours) in the first half of 2014.

Go California 😀 – show them how to deploy electric vehicles and related infrastructure on a high scale.

Go Baden-Wuerttemberg 😀 – show us how to deploy solar on a massive scale. 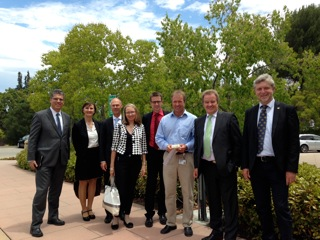