On 19th June we had a CodeJam at General Mills India Pvt. Ltd in Mumbai on ‘ABAP in Eclipse’. There were a series of code Jam sessions conducted, starting with SAP UI 5, then ABAP in Eclipse and then at the end ABAP for SAP HANA. This was the first time that I attended a CodeJam Session. These sessions were of 6 hours each from 11:00 am to 5:00 pm.

There were around 40 participants from different companies. The session instructors were Padma and Raghu from SAP. The session kicked off with an introduction round. It was followed by a brief introduction to the topic of ABAP in Eclipse. The Demo presented by the facilitators made the foundation for the concept of ABAP in Eclipse.  Both the facilitators (Padma & Raghu) were co-operative and helped us with the system setup. Then we started with the hands-on on Eclipse.  We were given set of exercises to practice it on the system.

The best part was we were given enough time to explore the new features on our own. The instructors were very helpful and were available to solve our queries; they shared many tips and tricks to use while working on the Eclipse.

One of the features I liked most in Eclipse is its auto save feature. Many times while writing code in Abap editor I used to lose my code due to sudden power failure or because of timeout, and being habitual of saving code at the end I used to face this issue that I time I used to think why SAP has not given an option of auto save, after seeing this feature in eclipse I felt so happy as this will avoid my re-work. Other feature that I liked was ‘no limitation on number of sessions’ because of this the navigation from one code to another has become much easier. 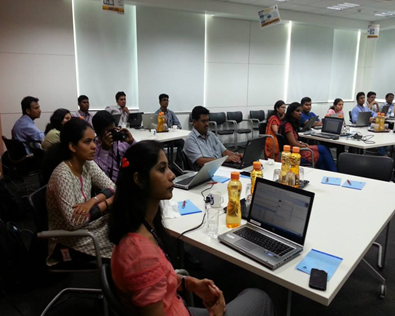 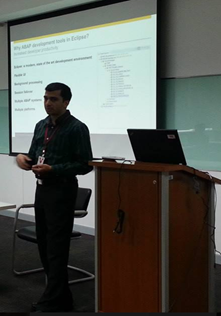 Then we had a delicious lunch at around 1:30 pm which last for an hour. It was nice to have lunch together with different discussions with different people. 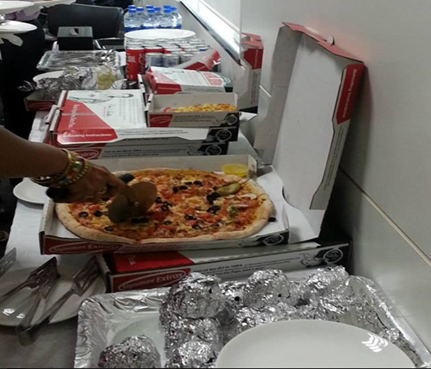 After lunch some more interesting topics were covered such as debugging in Eclipse & performance Tuning. It was amazing to see trace with the colorful graphics in Eclipse using tab Call Timeline. Also links with several useful shortcuts were shared with us.

Then after evening snacks. We were done with the session at around 5:00 pm. At the end I can say when we were going home we were taking away whole lot of knowledge about ABAP in Eclipse.

It was a wonderful experience attending this code Jam. Instructors Padmashree B and Raghuvira Bhagavan were very helpful and shared lot of information with us. It was nice to meet people from different organizations and different backgrounds. We were able to network with the other participants and share our experiences.

Now I am able to use Eclipse for my coding!!

This was another great session of Code Jam Series in Mumbai. I must say, post this session, our comfort level in using Eclipse has increased significantly.

It gave us insights on the various featues that eclipse gives us over our traditional GUI editor tools and the excersices gave us the comfort level to start using eclipse .