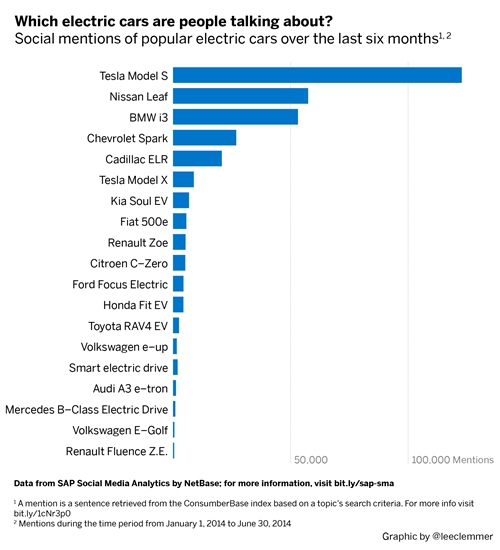 If you’re thinking about buying an electric car this year you’re not alone. Social chatter is rife with conversations about electric vehicles—good, bad, and mixed. The latest sentiment poll conducted by SAP Social Media Analytics by Netbase reveals Tesla is the number one car people are talking about. To the right is the complete list of most discussed automobile makers.

Interest may be running high in these car models but uptake is uncertain. Research firm IHS predicts global production of electric vehicles will grow 67 percent this year. Indeed, Nissan sold a record 3,117 Leaf electric cars in the United States this past May, and over 50,000 in the last four years. Yet it’s hard to believe that the Obama administration will reach its goal of having one million electric vehicles on the road by 2015. Consumer uptake in other countries such as China isn’t exactly booming either. As of the first quarter of 2014, there were less than 7,000 electric and hybrid vehicles on that country’s roads despite government efforts to support low emission automobiles.

That’s not to say companies aren’t stepping up with corporate programs that promote electric cars and other sustainable behaviors. For example, SAP just announced a new electric vehicle program that offers employees incentives to lease electric cars. The aim is to have 20 percent of SAP’s car fleet electric by 2020. Mobile apps round out the company’s latest initiatives. Now consumers in Silicon Valley and Germany can download for free SAP TwoGo, a mobile ride-sharing app that was previously only available to companies.

Of course, fear of power loss remains a major concern among drivers. The chart below reveals that it’s one of the top four trending sentiments people are sharing about electric vehicles. 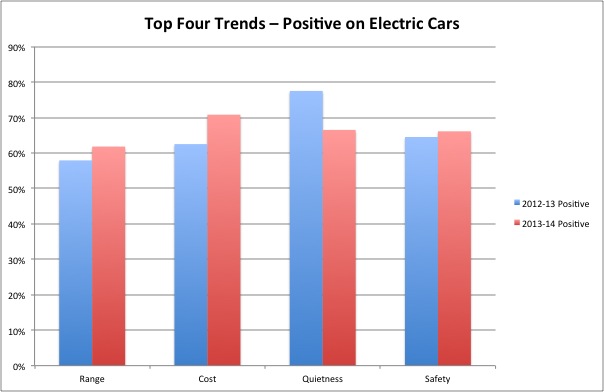 The other trending topics around electric cars continue to be quietness, safety, and cost. Positive sentiments about power loss rose slightly in the past year. People also appear more upbeat about costs which could bode well for manufacturers and governments that support more sustainable driving habits. Yet the same poll shows a decrease in positive comments on quietness, reflecting consumer fears about accident upticks as people cannot hear cars coming. It’s a legitimate issue, but brings to mind similar arguments made against horseless carriages at the dawn of the last century. Accidents were common when drivers long used to riding horses reflexively took their hands off the wheel and yelled “whoa!” instead of hitting the brakes.

Old habits don’t have to die hard though. Between government policies, corporate commitments, and manufacturer determination, drivers could get the break they’re looking for, and find it easier to get behind the wheel of automobiles built for this century.

Pedal to the Metal: SAP Challenge to Developers Shifts Connected Cars into Overdrive