that is deployed on the SAP Gateway server using the Quality Gate Management (QGM) which is part of SAP Solution Manager.

The scenario described is also applicable to projects where SAP Fiori applications and the underlying SAP Gateway service are extended and where the changes need to be transported through a typical 3-system landscape.

A big plus for both scenarios is that the complete life cycle management of a SAP Gateway service and the corresponding consuming SAP Fiori like application can be managed using the well known SAP Change and Transport System of an ABAP system.

As a result 1 customizing request and 3 workbench requests in 2 system landscapes have to transported in synch between the SAP Gateway server and backend systems as shown in the following picture. 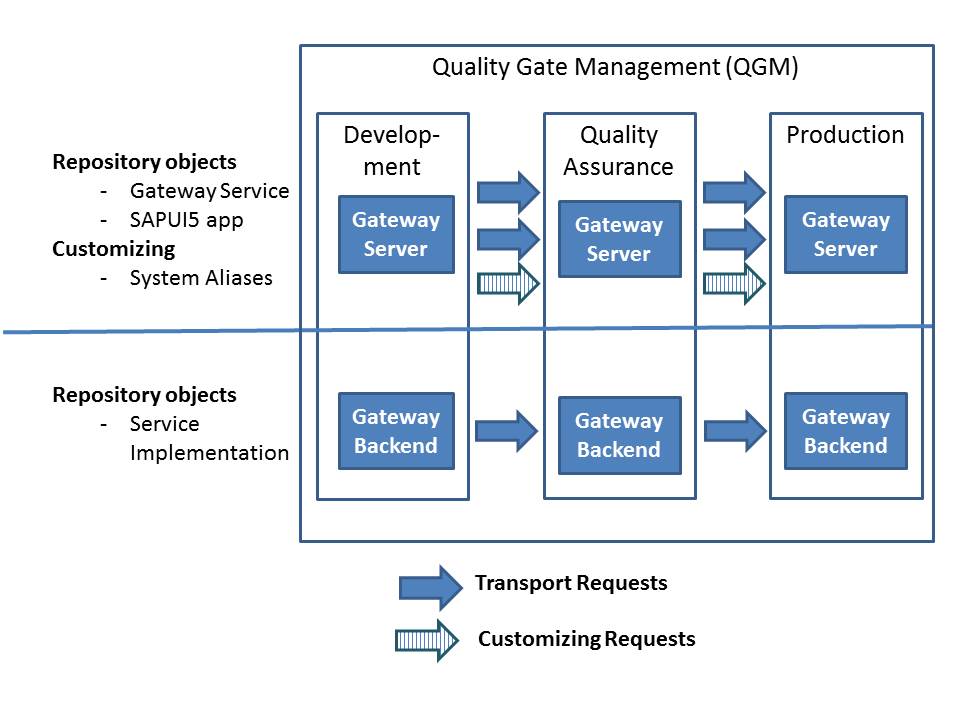 This is where the Quality Gate Management (QGM) comes to the rescue. QGM allows for the creation of so called changes which can contain one or more workbench and customizing requests in different systems. With the help of QGM the workbench and customizing requests that have been assigned to those changes can be transported in synch and the process can be controlled and monitored centrally from SAP Solution Manager.

If the objects that you want to transport cannot be transported since you might have created them in the development class $TMP, please have a look at the following post. How to change dev class $TMP for the repository objects of an OData service?. 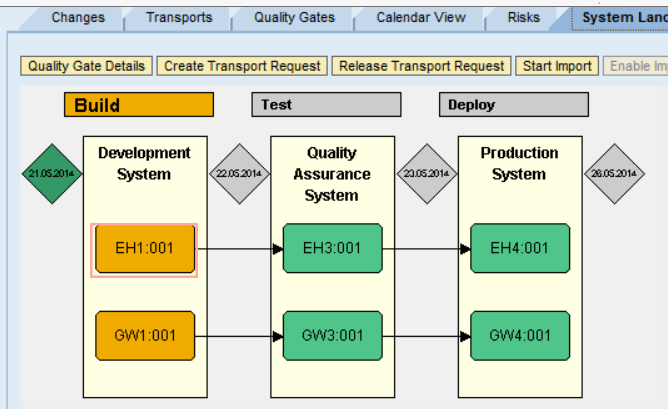 In a second step three workbench requests for

In addition a customizing request is created for the customizing settings of the Gateway service as shown in the following screen shot.

When the OData service developer starts to create a new project in the Service Builder in the SAP Gateway backend system and assigns it to a development class the developer will be prompted to assign these changes to the transportable Workbench request (here: EH1K900309) that has been created using QGM before. 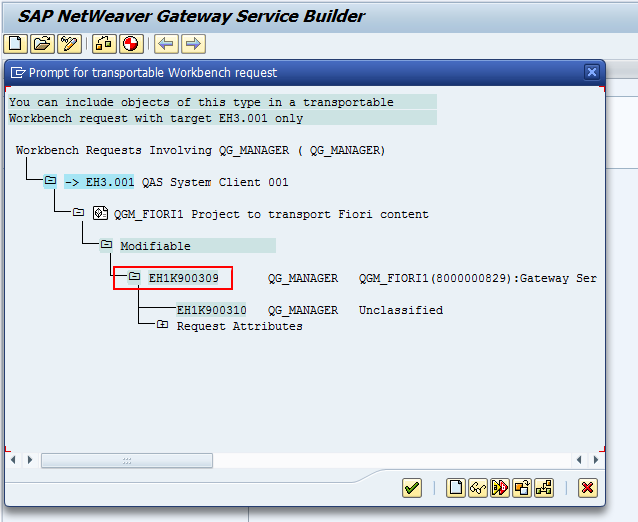 The steps shown in the video are described in detail in the how-to-guide How to Develop a Gateway Service using Code based Implementation.

The service implementation ends with the generation of the runtime objects. In this step the repository objects such as ABAP classes are generated and the Gateway service and model are registered in the SAP backend system. 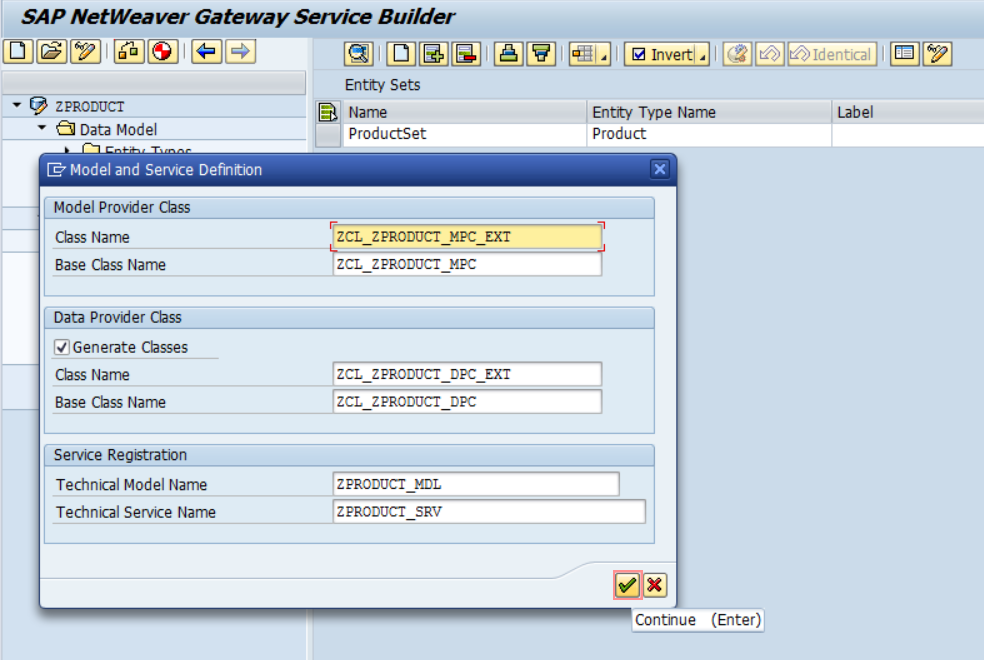 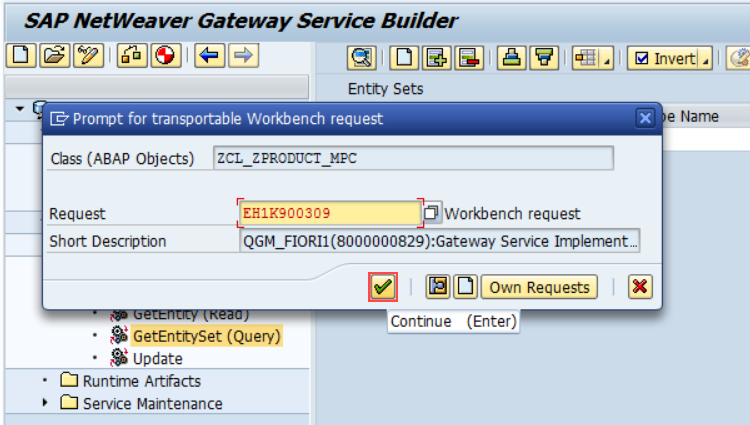 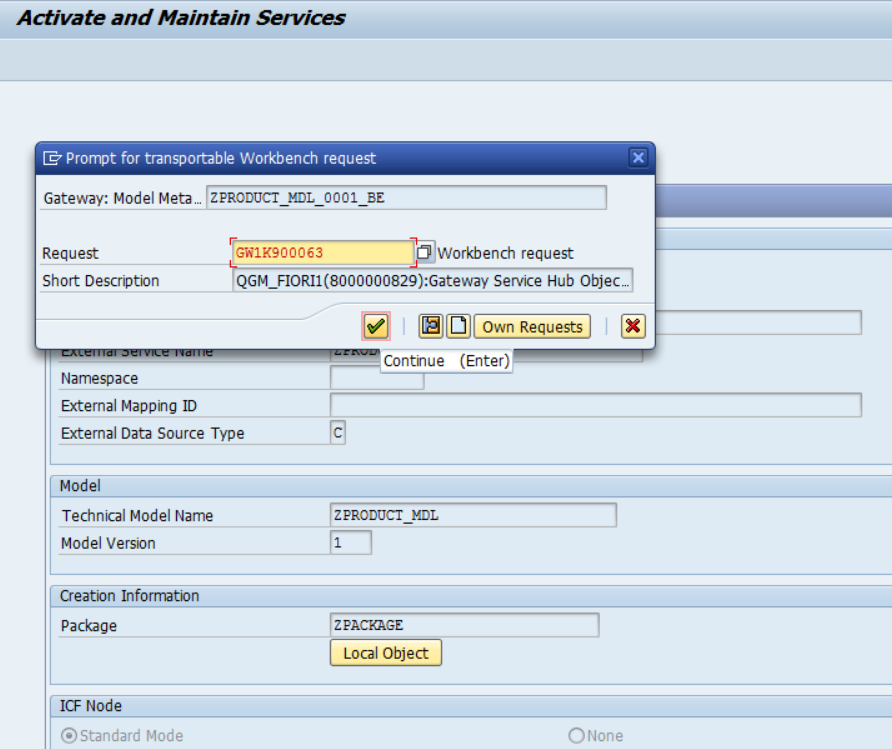 You now want to transport the customizing settings for the system alias(es) that are assigned to the Gateway Service. This can be done from within the customizing table maintance view.

The developer will be prompted now to provide a customizing request (here: GW1K900065) that has been created earlier. 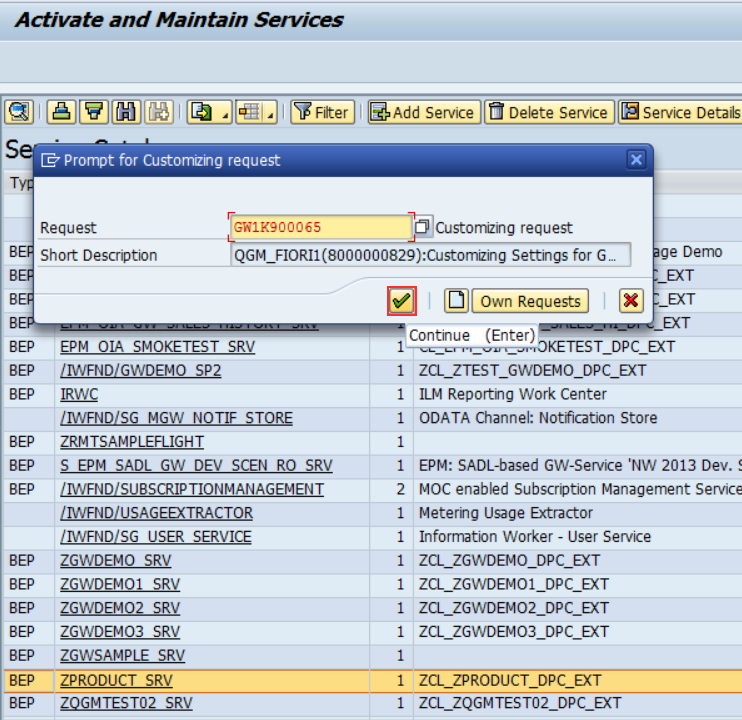 The developer of the SAPUI5 app can now develop the app and publish it finally on the Gateway server which is also called the frontend server for Fiori like applications. The SAPUI5 developer can submit the app so that it is published in the SAPUI5 ABAP repository from within his Eclipse development environement. Here the developer will be prompted to provide a workbench request (here: GW1K900067).

Now QGM will be used to transport the three workbench requests and the customizing request in synch to the quality assurance system and finally to production.

The status of the transports can be monitored. If for example a request is missing this can be easily be monitored in QGM 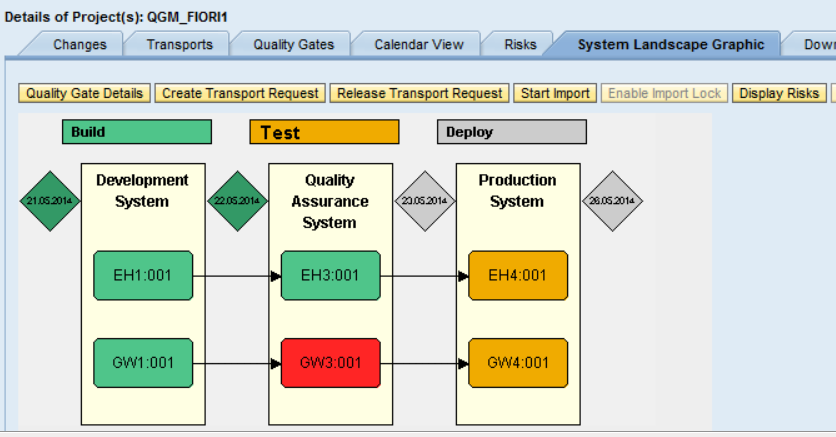 Finally all requests have been transported to the production system. 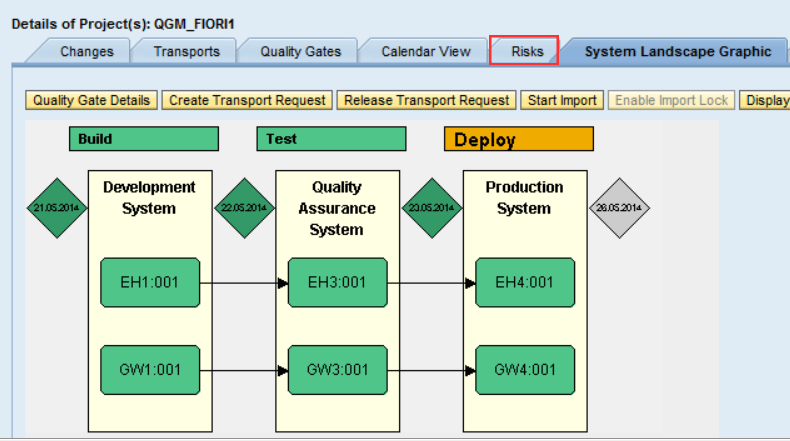 Finally the SAPUI5 app runs and displays a list of products  .

The following objects have to be transported between the SAP Gateway server systems:

Objects to be transported between the SAP Gateway backend systems

Thanks Andreas. Very usefull. I have a question.

I have read your document on creating System Aliases in Production.

you are right that any system alias in a DEV system should point to a DEV backend.

But the system alias is just a wrapper for the underlying RFC destination.

So for testing purposes you should use the same name for a system alias (e.g. CRM_BACKEND) in your DEV system as in your QAS and PRD system. This system alias should however point to the DEV CRM backend.

This is especially true if you want to test scenarios where several backends are used with a multi origin.

The assignment of a system alias to a service using transaction /IWFND/MAINT_SERVICE is customizing which is not allowed in a productive system.

Therefore I described in my document http://scn.sap.com/docs/DOC-42241 how it is possible to maintain the system alias itself in a productive system since this can be done as a so called direct setting whereas this is not possible for the assignment of the system alias to a service itself.

This way you can change the RFC destination which will be different in DEV, QAS and PRD.

Perfect. Got it now.

Under Activate and Maintain Services ERP_UTILITIES_UMC, I was able to transported to QA, but the changes does reflected in QA. Do you know why?

i am not sure whether I understood your question correctly.

Can you please give some more details what worked and what did not work?

ERP_UTILITIES_UMC is the OData service delivered mit the solution multichannel for utilities. So this is usually imported into your backend via an add on.

the only thing you transport is the service activation.

so if you only have transported the service activation you might be missing the service implementation part?

thank you for your post. Please i have a question, after transporting my Fiori App to Q, how can i simply delete it without deleting one by one.

your question is not 100% clear to me since do not get what you mean by "without deleting one by one."

Are you planning to delete one or more SAP Fiori applications (apps and odata service implementations) in your Q-system?

Are you planning to delete apps and odata services in the dev system and are wondering whether the deletion can be transported as well?

Thanks for your answer, i want to transport one Fiori Application form Dev in Q ( with one or more transport request). After transporting in Q i need to transport again in P-System. and also want to find a solution to delete it (apps, odata service, role and catalog) in P without delete in Dev

Deleting all items in the DEV system and then transport the deletions through Q and P.

See also the comment of my colleague Jorge Baltazar in another blog.

If you have objects created that are local objects and can thus not be transported my following blog might help:

But can i delete all items in Q System and then transport the deletions through P? Is it possible?

deleting objects in a Q-system when they still exist in your development system is tricky. See the following blog post about "deletion transports" and especially the comments that discuss other options using SE80.