The SAPPHIRE Experience by Dwight Dy

The dream of getting into an SAP career has felt almost like me chasing ghosts for the past 6 years. Although, I have heard of the challenges of starting a career in SAP, the challenges of getting a job in any field, as an international student in the United States, can be even more stressful. The fact that I am (1) an international student and (2) seeking a career in SAP has not stopped me from learning and enjoying the journey.  I will continue striving to achieve my dream career working in the SAP space.

Let me back up a bit.  I was a team leader of a team that participated in the 2013 SAP Connected Car Contest. We gave our very best, however keenly aware we had world-wide competition. By the time that the results came out, we were one of teams who had won and were invited to Palo Alto for a SAP workshop (August 3-9, 2014). When I thought this could not possibly get any better, I received an email from our SAP Connected Car team’s faculty mentor, Professor Mary Beth Goodrich informing me that the SAP University Alliance had invited her and me, and also one of my teammates Atul Nagar to attend and participate at SAPPHIRE NOW 2014!

With privilege and overwhelming joy, I would like to share some of my exciting experience and the fun I had during this event. ₁¹Early morning, we headed to the Orange County Convention Center for the registration and had gotten our ID badges. ₁³After that, we went to the Hyatt Hotel to meet up with the SAP University Alliance team, professors and students from different universities. ₁²We had the chance to listen to interesting presentations and got to participate in an activity, which was very enjoyable and exciting – ₁⁴a big data design thinking workshop. In the afternoon, the students, including me, were escorted back to the convention center to have an orientation on our roles for the event and ₁⁵also to get a glimpse of the crew workers setting up the place. At night, we attended a party intended for students. I got to bond with the professors, fellow students and meet more people who share my passion about SAP. Also, I was able to see Jeff Word, the author of the book I used in my SAP business processes course, and listen to his charismatic input. ₁⁶I only had one alcoholic drink for the entire week because I was just too excited for what had in stored for us on the next following days. 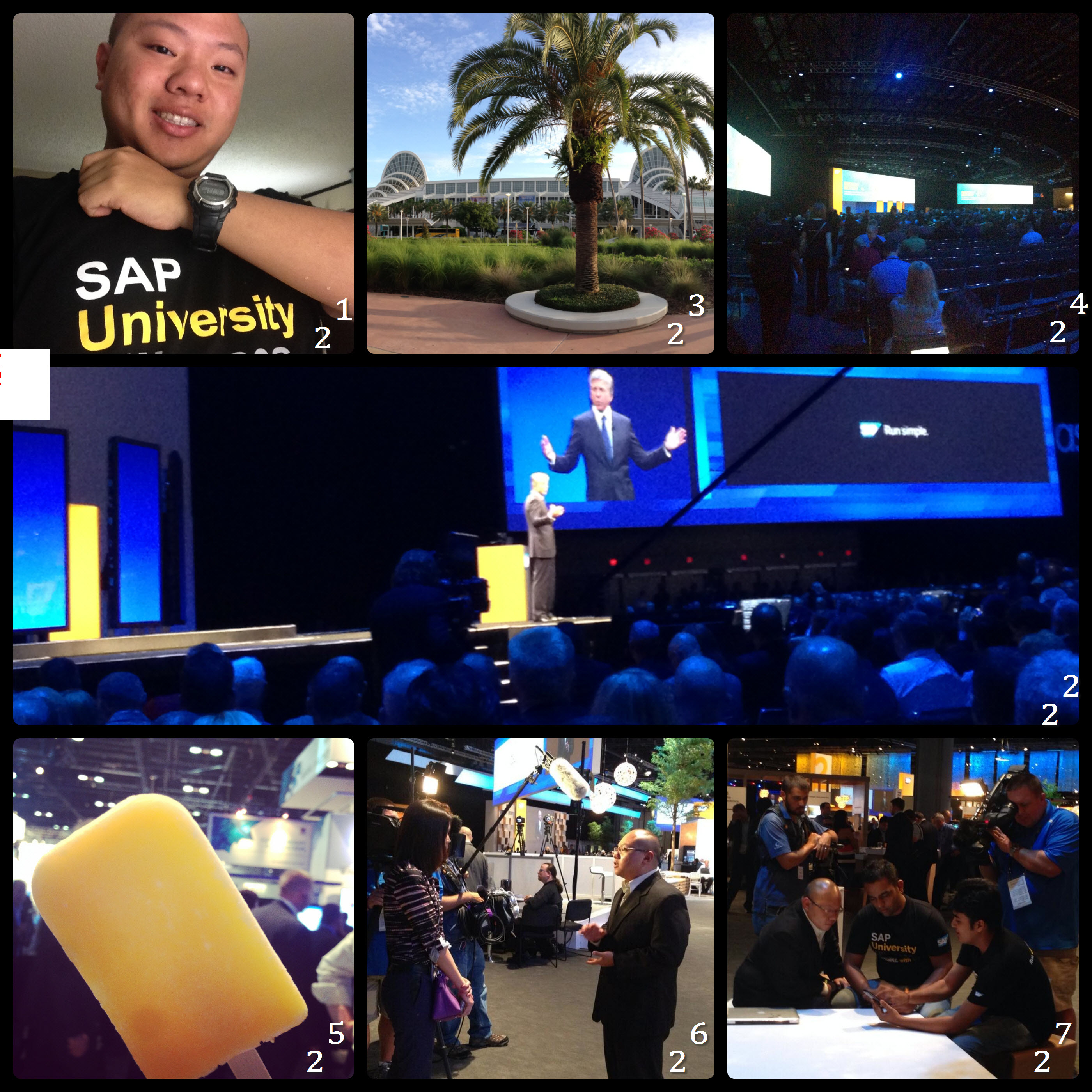 ₂¹The first day of the convention was already a memorable thing for me. ₂²Attending the keynote and seeing Bill McDermott in person for the very first time, got me psyched up. Providing assistance on the show floor and meeting SAP professionals was so much fun that I just wished the convention would never end.  ₂³For much of the time at SAPPHIRE, I was lost. ₂⁴ I had no idea that it would be so enormous, but a space to house 25,000 participants, the size of a small city, would have to be pretty big. Right? Thirty (30) minutes was the standard amount of time it took me to arrive to the place where I wanted to be. I was able to get a hold of some of the ice cream – which was certainly a big treat for me! While I was heading back to my post, ₂⁵holding an ice pop, a man came towards me and asked, “Where did you get that ice cream!?” As one of the show floor support people, I gladly walked with him to the ice cream station. I even served a bottle of water to a lady since she was not able to locate a drinking station and I could not let her miss a minute of the content she was learning about at her session. Before I ended my day, ₂⁶ Evelyn Lam Ling Ting from Mediacorp TV News – Asia, invited me over for a ₂⁷media interview. When I got back to my hotel, I felt so tired but had a huge smile and rewarding feeling deep inside of me. 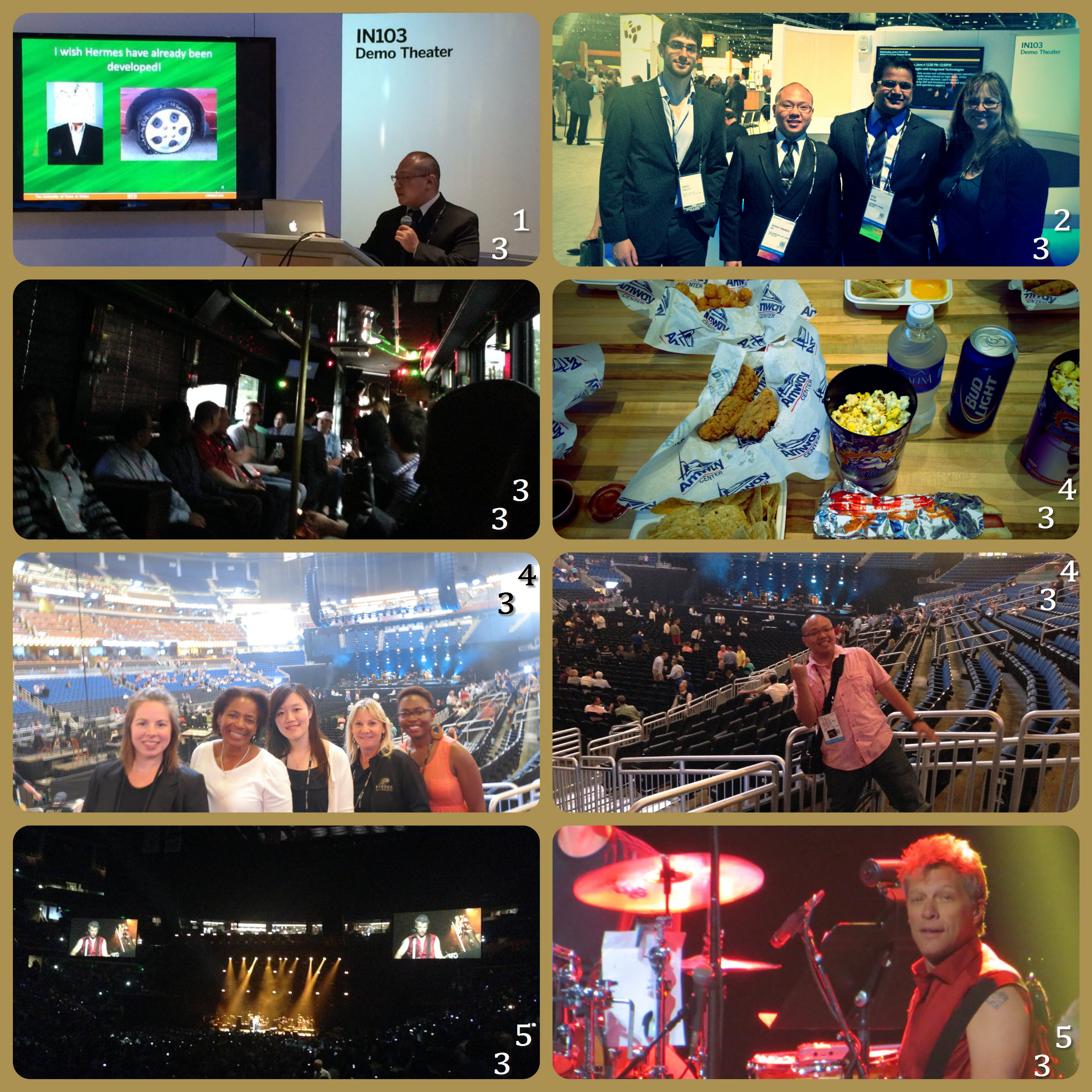 ₃¹Not only we were managing sessions and assisting speakers at the demo theaters, but also, Atul Nagar and I were presenters on this day. Having the opportunity to present a preview of our proposed system that won the SAP Connected Car competition was such a great opportunity for us.   We also had a chance to meet ₃²Lared Lindzon, Freelance Journalism from Toronto who expressed interest towards the contest and to our achievements. ₃³ At the end of the day, we rested for a while and headed to the ₃⁴Amway Center to see ₃⁵Bon Jovi. The rest of the night was a sweet rocking history for us to remember. 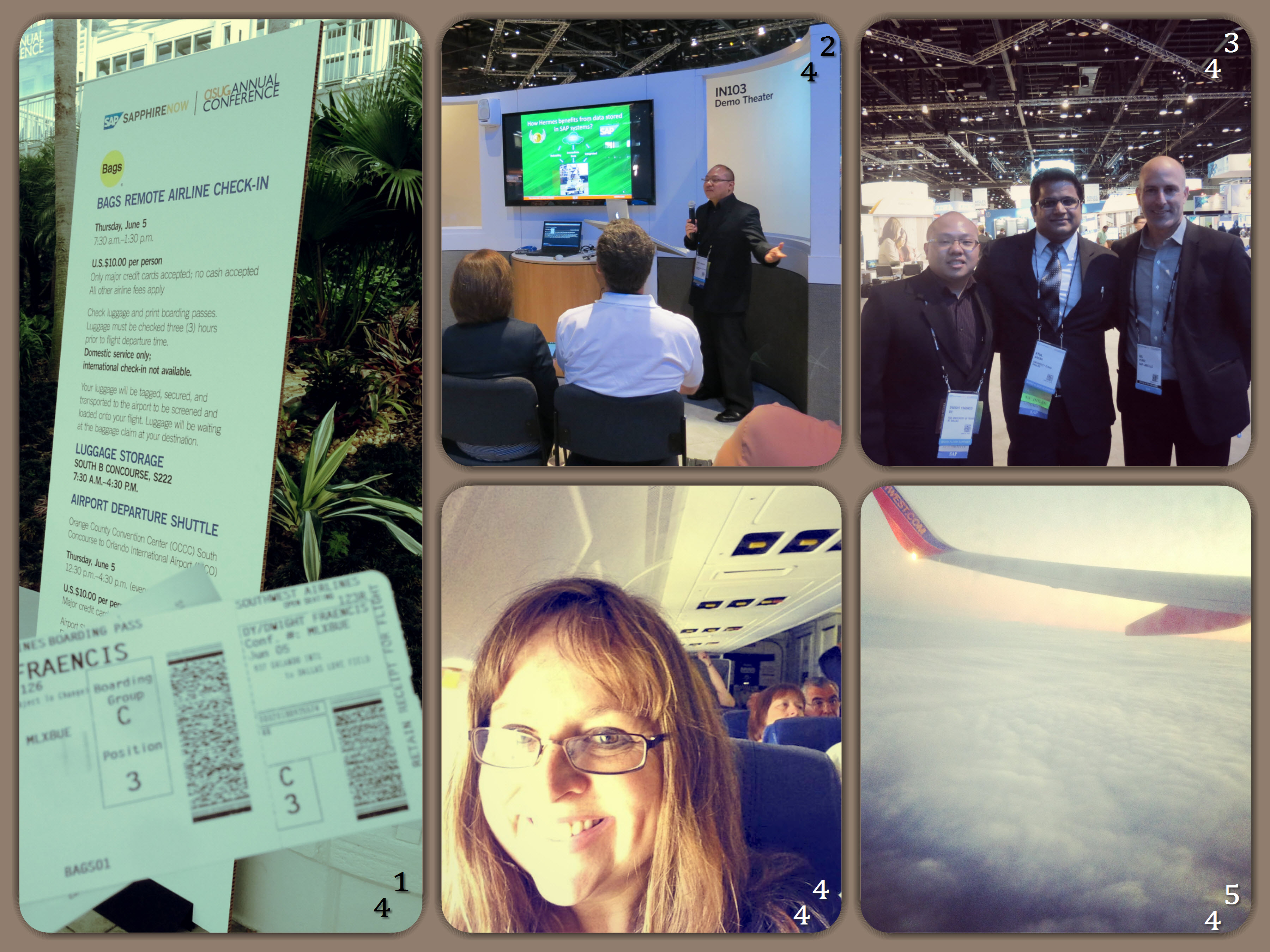 Just in front of the convention center, they offered a ₄¹check-in baggage service that made it so convenient for us by not having the trouble with dealing with it when we got to the airport. This was actually the day that gave me a realization that I need to end this day with a bang since it was the last day of the event. I visited booths, learned about services and met as many new people as I could.

In the afternoon, it was so considerate of Professor Goodrich to stay longer than she should have at the convention for the sake of being there for our ₄²last presentation. Our speech went well with a great impact. ₄³We were able to take a picture with Gil Perez in the last minute before heading to the airport. We were actually in a hurry to catch Professor Goodrich’s flight since it was less than 2 hours away from its departure and we also needed to get gas.  We should or could have used the Hermes system we recommended in our SAP Connected Car contest to find the closest gas station! ₄⁴Fortunately, Prof. Goodrich was able to get in to her plane with only 12 minutes to spare. After saying goodbye to my mentor and to my teammate, I took my time in the airport. While reminiscing about the amazing things that had happened that week while waiting for my flight, ₄⁵I met an interesting couple from Louisiana and was able to network with a few SAP Professionals during my flight back to Dallas.

It is already been over a month since SAPPHIRE but the flame of excitement to learn all I can about SAP still glows inside me and it is brighter than ever.  Being exposed to such an experience as a student was like winning a lottery. This event encouraged me to keep on moving and has gotten me one step closer to my dream. I want to thank SAP and the SAP University Alliance for making this happen. I am truly grateful to my mentor, Mary Beth Goodrich for the continuous support and also to my team (April Li, Atul Nagar, Sunny Jiang and Prachi Sahoo) who have worked hard under my leadership. Lastly, I am also thankful for support that was provided to me by The University of Texas at Dallas. As long as we have our goals to aim and the passion to move forward, we can overcome any obstacle.  Thank you, SAP, for getting me one step closer to my dream:  a career working with SAP.

The University of Texas at Dallas

Thanks for sharing your experiences at SAPPHIRE NOW Orlando. The SAP University Alliances team appreciated you contributing to the event, including your presentation together with Atul on your Connected Cars concept! Best wishes,