Of all the industries, life science brings to mind the term innovation.  However, recent industry consolidation focused on different business factors and even divestiture of blockbuster drugs challenges our notion of the role of innovation in this industry.  The macro-economic version of innovation is startup companies.  Recent published research also shows the role this is playing in the overall economy is slowing down as well.  If innovation is not enough in life sciences and is even declining in the overall structure and dynamics of the economy, this should help sensitize us to the changing economy that manufacturing companies are operating within.  Innovation is necessary, but is it sufficient?

I think about the economics of the incredible R&D investments in drug research and the long shot but huge payoffs as being the heart of pharmaceutical companies.  When I read about new applications of nanotechnologies, medical devices, testing, and pharmaceuticals immediately come to mind.  Few industries are more tightly coupled with academic research or the fear of disruptive innovation of some spin-off from this research than life sciences. Boston, a hub of academic and life sciences innovation hosting nine of the world’s ten major drug companies, defines it as a new growth theory. The “old growth theory” is defined as “economic prosperity springs from the accumulation of ever greater stocks of the fundamental ingredients of production: capital, labor and natural resources.”.  The ‘new growth theory’ attributes innovation based growth that avoids the classic problem of diminishing returns on any given investment.  Once the fixed cost of creating new technology has been incurred, the formula can be used over and over again at little or not cost.  I would think “Innovation” would have to be the primary driver of companies in this industry.

My colleague, Susan Rafizadeh, however, recently wrote “Life Sciences: When innovation is not enough to grow quickly” about the drivers of the life sciences merger mania enumerating many of the largest deals summarized by PWC (here) as a 53% increase over 2013 to 49 deals worth $44.9 billion.  Susan described the drivers of these were not some new magical drug from a startup or the effective R&D portfolio management in a large company.  The deal drivers she listed were a) margin improvement, b) business focus, and c) tax or cash incentives.  Instead of some prized drug representing medical breakthrough, she described large companies who are literally swapping assets back and forth to better align their focus and efficiencies.   This brings into question the true role of innovation in the life sciences industry and intuitively makes one wonder about other industries and the economy overall.

In addition to the fast pace of product innovation, the industry has long been associated with a high rate of startups associated with this innovation.  This is recognized as a critical economic component of productivity increases.  The overall “business dynamism” as the process by which firms continually are born, fail, expand, and contract, as some jobs are created, others are destroyed, and others still are turned over.  While company failures are not intuitively a positive, overall in the economy this is considered a productivity booster of free market capitalism reallocating jobs and resources from less productive to more productive areas.  Industries with higher rates of startups and failures are more dynamic, vibrant, and create value quicker.

Recent research by Brookings Institute shows, however, the rate of industry dynamism is slowing down in the overall US economy.  The rate of firm exits (e.g. failures) has remained steady or increased significantly after the last economic recession, while the number of firm entries has dropped precipitously.  Business deaths now exceed business births for the first time in 30 years.  The recent economic shock of the US first quarter GDP decline of 2.9% was attributed in recent Wall Street Journal article (here) to fewer startups.   The creation or death of a business has obvious job ramifications.  These combined with other dynamics represent an equally troubling rate of job reallocation rate dropping by 10% during the same period.  Brookings research found this trend to be generally true overall all metropolitan areas and states in the US. 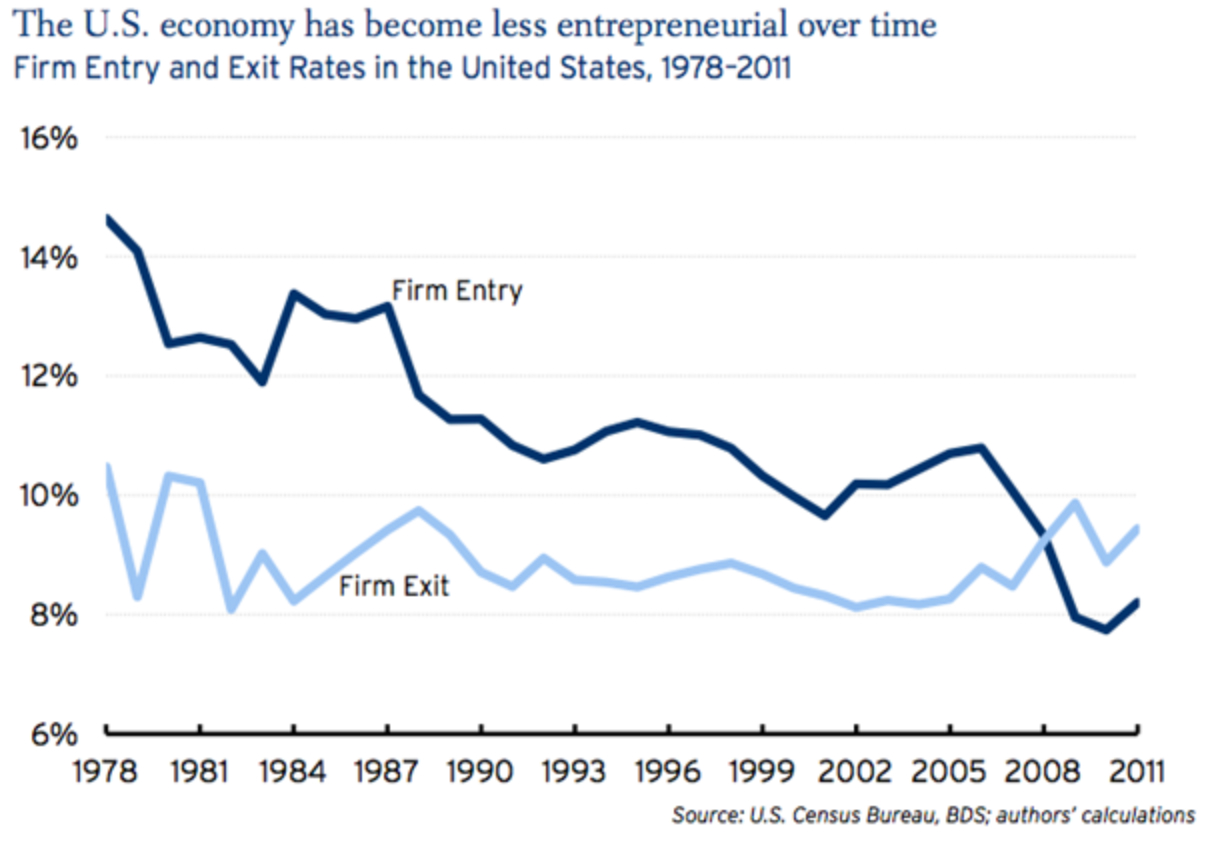 Brookings Institute – Declining Business Dynamism in the United States: A Look at States and Metros (here)

Additional research found life sciences overall did outpace other industries for companies established for 1-5 years by over 4% in net new job creation.  In more mature companies > 11 years old, the rate of job creation is almost equal at 2.5%-2.7%.  This supports the decreased differentiator of innovation, market maturity, consolidation, and business drivers that Susan identified in her blog.

The life sciences industry specific trends (see below chart) vary considerably by sub-segment with drugs/pharma leading significantly in newer companies 1-5 years old, but declining lower than research/labs/testing companies of in the greater than 11 years old category.  The drug/pharma segment synonymous with innovation differentiates in the early years, but is minimized in the mature years just as we saw overall. 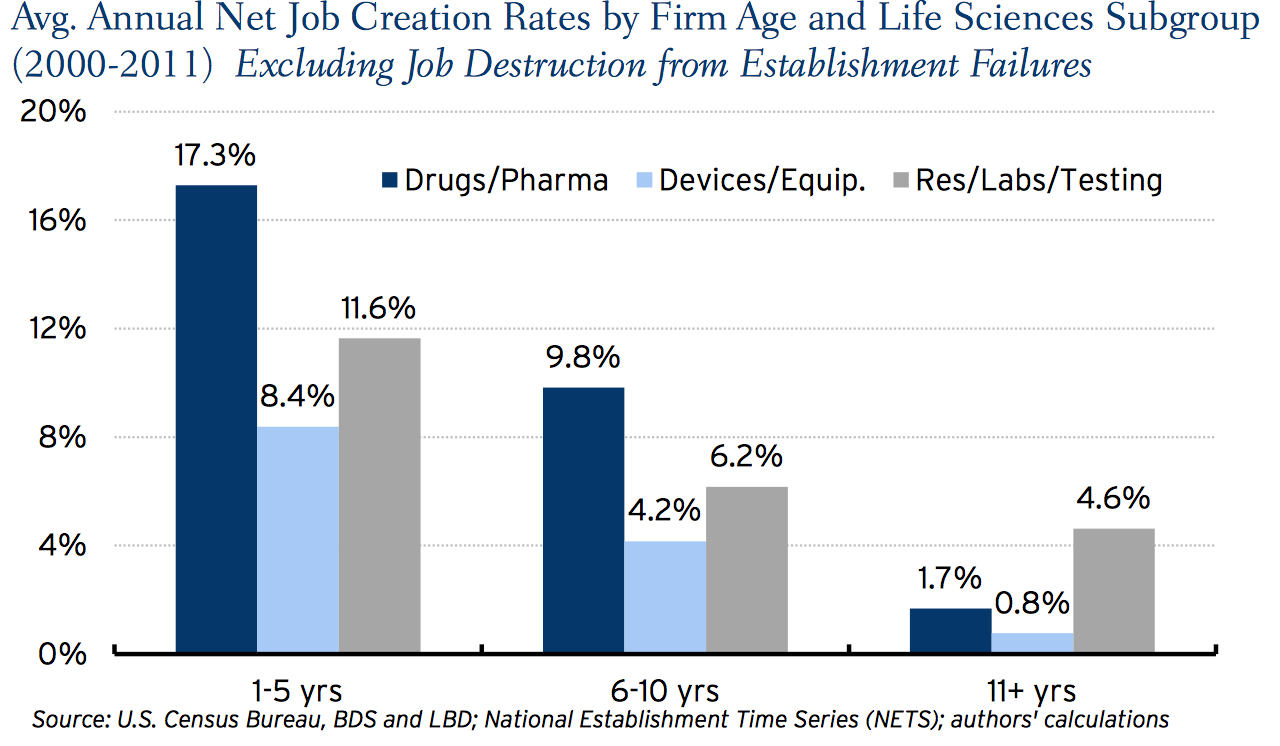 Manufacturing companies are facing ever-increasing challenges with a radically shifting economic reality.  Innovation is necessary for survival, but it is not sufficient.  The number of business failures is now exceeding the startups.  SAP’s ability to help life sciences companies with improved operational efficiency, focused and effective R&D, and managing a global enterprise are still keys to long-term survival.

To learn more about how SAP can help you with your business challenges please have a look at the Life Sciences web pages on sap.com