SAP Multichannel Foundation for Utilities just got better with Sp02

Sp02 ( Service Pack 2 ) is the first major release ( RTC: 30 June, 2014 ) after we launched the solution in November last year .  As communicated in our solution roadmap, the release coincides with end of ramp- up program for SAP Multichannel Foundation for Utilities( SAP MCF ) after the first ramp-up customer went live with the solution.  The solution is now GA ( Generally Available) meaning it is now ready for shipment without any restrictions.  Some of the key highlights of Sp02 release: 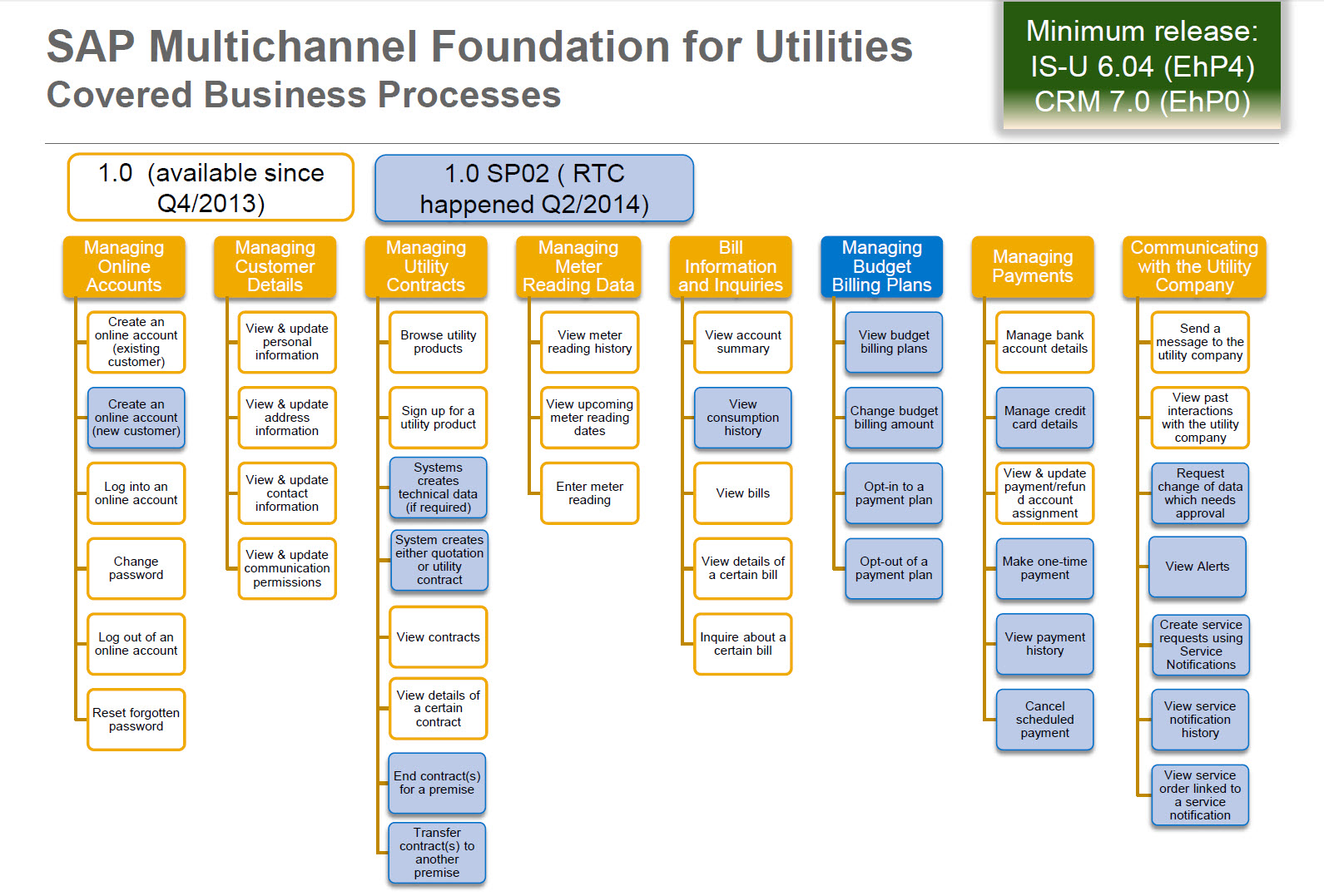 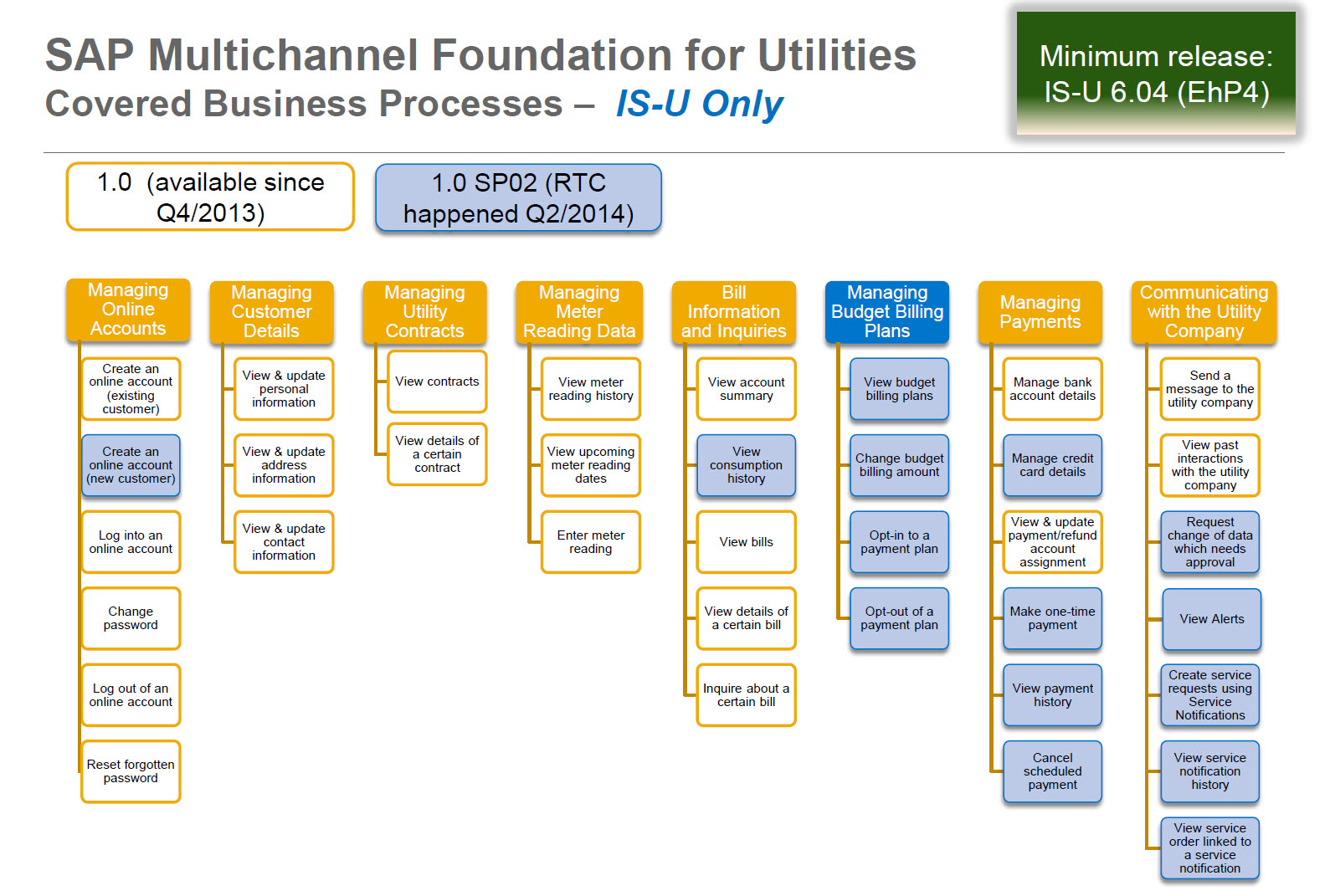 We are keen to hear your feedback, to know about features you feel are missing or you would like to see in future releases. Just as information,  Sp03 is around round the corner, planned to be released in Q3/2014* ( *subject to change). Do check out the planned scope for SP03 release.

Have a look at other blogs on the same topic.

I am looking forward to your comments.

We will be installing Sp02 next week.  The  BBP, create a new customer and payment functionality was a big surprise and I see the payment and payment specifications builds off of the Biller Direct function modules. I was expecting to see the responsive UI so we could see the mobile UI and how it looks with Fiori tiles, but I guess that will be in SP03 🙁 .  I guess I can wait a little longer.  Expected in September 2014 correct? I agree with your statement - Enhanced Error handling, performance improvements based on continuous customer feedback from ramp up and co-innovation customers.  This is an improvement.  Also noting that using a combination of the front end (gateway error log) and the back end (CRM error log) along with using F12 developer tools from the browser and setting a break point for the service user to debug the errors is very helpful.

Also I don't know if I will have to do this in this version but I noticed in the documentation it still has the URL for UMCUI5 application in lower case.  This caused me grief as it would cause an alternative login page to appear with out the links to create a new user or reset password.  I solved it by making sure UMCUI5 in the URL for launching the app and the URL configured for user registration had UMCUI5 instead of the lower case  umcui5.  I'm looking forward to testing the new release and will share my experience with it soon.

Thanks Mohammed for letting us know it was now available and the improvements included in this release,

Is there any difference between umcui5 and UMCUI5 , because while implementing i dint noticed that, and we have gone with the UMCUI5. If any differences bet. these two kindly acknowledge.

I don't think it is an issue anymore I believe that  there was an OSS note that translates the umcui5 to UPPER CASE if it is not already so.  I use upper case and the system seems to work even if you type the umcui5 in lower case because of the logic that was put in place. It was included in the follow-on SPs.  What SP are you using currently?

Thankx for replying to my question.

We have implemented our desktop application on SP01 with integration of sap-crm and sap-isu as backend systems keeping crm as a leading system. I also dont think that dere  will  be an issue for the lower and upper cases bcoz as i can remember we maintained the activation url where in the url we gave zumcui5 in a lower case and automatically it changes to upper case whenever the activaion url is hit.