So says Italian team captain Domenico Burinato from SAP Milan. Riding in a team of 14
over the Alps, across Switzerland and around Lake Constanz in a 652km 5 day
ride, the Italians will indeed need healthy hearts as they take on the highest,
toughest  route of any of the teams.

Five teams of SAP employees, family  and partners are this week making final preparations to ride a total 2700km from SAP offices
in Brussels, Walldorf, London, Paris and Milan to SAP HQ in Walldorf, Germany.
Their goal? To raise more than €50,000 for charities helping young people in Africa and Europe. This follows the huge success of the 2013 Cycle4Youth, when 62 cyclists made up of SAP employees and partners cycled the Challenge.  Many riders have chosen to repeat the ride again
this year.

“Last year was a great personal achievement: a little time dedicated to me that had with the help of SAP  a great charity/humanitarian
reward” Carlo Sottini, Italian team who at 55 is one of the older riders. 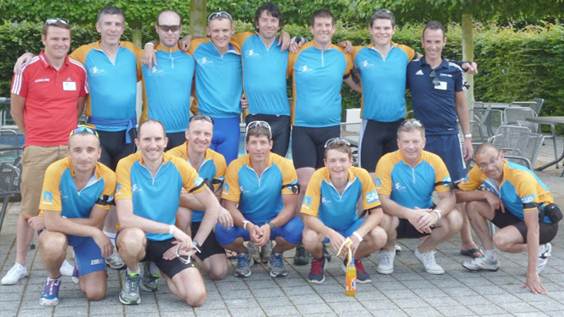 France team 2013 – despite previous experience many riders have chosen to repeat the ride this year!

The French team is 16 strong including 11 riders who took part last year. Stephan Ollier,
an accomplished tri-athlete in the French team is joined once again this year
by his son Luther who at 14 is the youngest cyclist. They will be tackling a 5
day 614km route.  Their team lead Mark Wentz is not the only rider to have completed a training schedule – which
included the FT London Sportif (104km) and the Wiggle Dragon Ride in Wales (165km) to prepare himself.

Impressively he has also found the time to drop 14kg and juggle moving roles and continent
with his family as he moves from Paris to Singapore.

Once again Katleen “I like adventure” Van der Waeren is the only woman riding in Cycle4Youth
this year, as part of the Belgian team. She is one of three riders from Delaware Consulting, an SAP partner, and is aiming “ to enjoy the tour this
year”.  Along with most of the team and their team lead Guy Van Wilder she is repeating the ride from 2013.

Tim Meeusen is one of two pro-cyclist guides supporting the Belgian team and has just  tested the route and found it harder than he
expected. “I was quite surprised by how many hills there are in Belgium”, at 37 he has 23 years cycling experience, 8 as a professional.

Luckily for the team he also took physiotherapy classes at Cycling school so his team will be benefitting from
not one but two massage tables in the support vehicle!  Tim and fellow pro-cyclist guide Thierry Versteele will be supplying recovery shakes and massages  as well as advice along the route.  “My goal is to give the team a nice experience on and off the road – we will start and finish together and have
some fun”.

Experts Destin8 have provided all planning and logistics support for Cycle4Youth and arranged pro-cyclist guides and support vehicles
for each of the teams taking part.

Show the riders your support!

Colleagues, family and friends will be cheering on the team as they leave their SAPoffices THIS
week – please join us and show them your support.   You can also join them on Twitter and Facebook.

All the teams will meet up at SAP headquarters in Walldorf, on Tuesday July 8, for a big welcome celebration to recognise

the achievement of the riders and contributors to SAP Cycle 4 Youth.

The 2013 event raised €56,000 to support under-privileged children in Africa. At €1 per mile, SAP
is supporting three charities this year – World Bicycle Relief, Good Future and Hope Foundation and The Sepp Herbeger Foundation of the
German Football Association.

The Teams at a Glance