All About DWS Variants

Recently when I posted my first document, there was a request that I should create something on DWS Variants. So here it is…

The primary focus of this document would be to understand the purpose and configuration of a DWS variant for a working day and absence. Also, we will see some examples to get a better understanding.

The Daily Work Schedule as the name suggests specifies how a single work day would be. Now in case there is a situation when work timings need to be different based on some condition such as a day before the public holiday then we would need a mechanism to be able to capture the same. In such a situation making a different DWS also would not be feasible as we would not know when the public holiday would occur in our roster. Another situation could be that, if we book an absence, then we do not want the standard working hours to be deducted for that day, instead we want only 50% of the hours to be deducted. A way of doing this is via the quota multiplier of the counting rule but that does not seem a feasible solution when you wish to apply this condition only for employees on some specific rosters. This is where DWS variants come to our rescue.

When we create a DWS variant, in simple terms it means creating another record with the same DWS and identifying it differently with a variant name. Along with this we would also need to configure a rule which would specify the condition under which this variant is to be selected. An example variant looks like is shown below:

You would specify the normal DWS on the main screen. The DWS Selection Rule plays an important role here as you would need to select the correct rule for which your variant should be processed.

Since DWS variant can be created for both working days and absences, these two types are differentiated by the “Record Type” in the DWS Selection Rule. Let’s see both of these in detail below.

From the above explanation, we know that we need to create a rule to meet the condition for which we are creating the variant. The Record type for the DWS rule for working days would be 01. The rule is created in table V_T550X. The customizing path for the same is Time Management –> Work Schedules –> Daily Work Schedules –> Define Rules for Variants

Now let’s try to understand how to configure this rule: 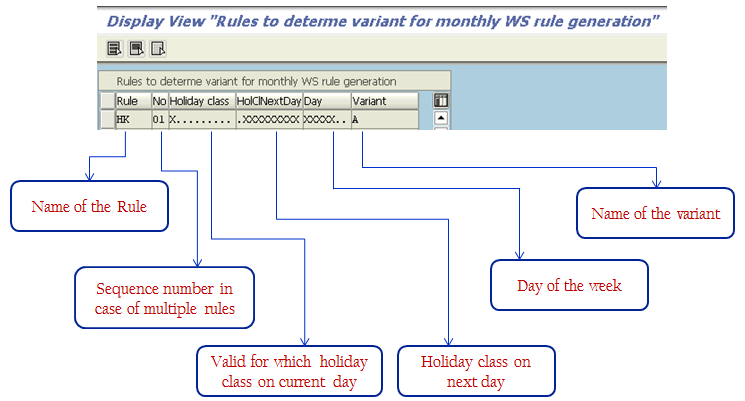 Rule: Name of the Rule.

No: In case you want to create multiple conditions for the same rule, this is the sequence number for the same.

HolClNextDay: This is similar to the previous field in its usage with the only difference that it is used to specify the Holiday Class on the next day. X at any position would mean that the rule is applicable if the next day had that particular holiday class. So if you want to create a variant rule for any day which is prior to a full day public holiday then in this field you would put a X on the second position which is for Holiday Class 1.

Day: This field has 7 positions, one for each day of the week starting Monday. X at any position would mean that the rule is applicable for that day of the week. So if you want to create a variant for Friday, you would have to put a X at the 5th position.

Variant: This specifies the name that you give to the variant which would also be used in the DWS.

One thing which you should remember is that the rule is always configured for the current day being processed.

Let’s check some sample conditions/rules to understand this configuration.

Example 1: Employee would work 3 hours less than his usual working time one day prior to a public holiday falling on a Saturday.

This rule would be selected as the DWS Selection Rule for the mail DWS. Then a variant named A would be created which would have the planned working hours as 3 hours less as compared to other working days.

Example 2: Every Saturday should be a half working day.

Solution: This can be achieved in two ways. First is to create 2 different DWS – one for other weekdays and other for Saturday. Second is to create a DWS variant for Saturday. This variant would have the planned working hours as half of what is there for the other days. The rule would look like below:

Similar to the variants for working days, we can create variant rules for absences as well. The purpose of this variant would be to deduct different number of hours in case of an absence instead of deducting the usual planned working hours. For example, we have DWS having planned working hours as 9hrs. In the usual case if we book an absence it would deduct 9hrs itself. However, if we want to deduct only 8hours instead of 9, then we can create a DWS variant for absence. The record type for this variant rule would 02. The rule is created in table V_550X_B. The customizing path for the same is Time Management –> Time Data Recording and Administration –> Absences –> Absence Catalog –> Absence Counting –> Determine Daily Work Schedule
Variants for Absence –> Determine Daily Work Schedule Variants for Absence.

The rule for absence is configured in the same way as for the working days, with the only difference of an additional column for Att/Abs Grouping. 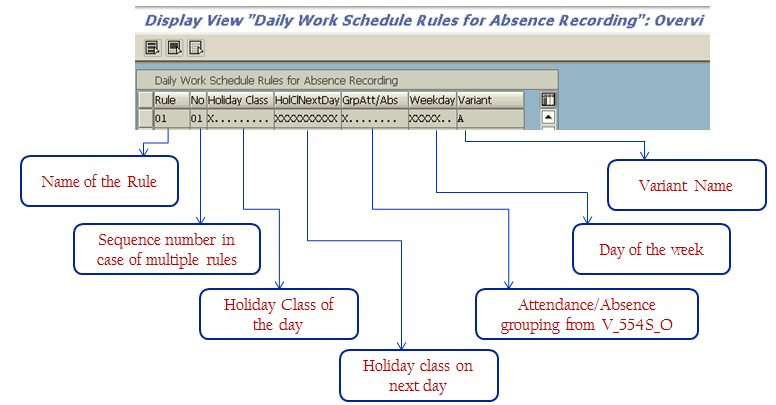 The absence grouping would allow you to control which absence is the rule to be made applicable for. Each position specifies a grouping between 1 to 9, 1 being the first position and 9 being the last and a ‘X’ at any position means the rule is applicable for an absence with that grouping. Numbers 1 to 9 can be assigned to each absence in the table V_554S_O. This would allow the rule to be created only for some absences and out of all those which are available for the employee. Meaning of rest of the fields remains the same.

Example 1: Any absence booked one day prior to a public holiday should deduct 3 hours more than the planned working time.

Solution: From the requirement it is clear that the next day should be a public holiday and the rule is to be made applicable for all absence groupings. So the solution would be as below:

The variant would then be configured with planned working hours as 3 hours more than that for other days.

Example 2: Any absence booked on a Saturday should deduct 2 hours less than the planned hours for other days.

Solution: Here the only check that we would have to make is for the current day to be Saturday. So the solution looks like below:

This variant of this DWS would be configured with 2 hours less than the normal working hours.

Now that we have seen how the rule our configured, let’s take a quick look at how the DWS looks like along with its variants. The example below is a different one, not related to the rules we checked above. 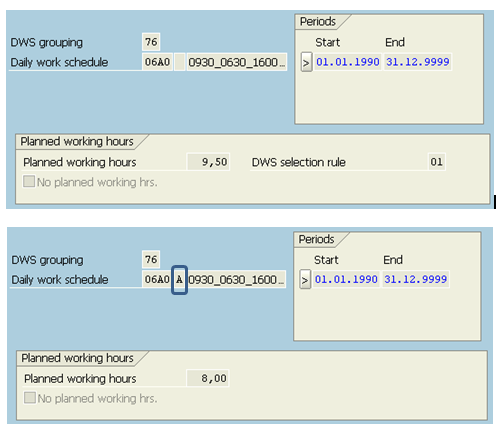 Hope this document has been helpful in making you understand the concepts in detail.

Nice document made, screen shots are easy to understand, explanation is very clear.

Thanks a lot for sharing.

Thanks a lot Nisha...glad to know that its helpful for the community

As usual good keep it up

Shruthi, Is this scenario Possible through variant?  if a holiday fallen on sunday (lets say holiday class 4) then can i make following monday as half day (9-12 shift)?

In the standard configuration of variant rules, there is no facility to check the holiday class of the previous day. Also the variant of the rule affects only the current day and not the subsequent day, thus it wouldnt be possible to do this directly via variants.

One more very good document. Thanks for your contribution. Its nice to see some very interesting information backed by good explanation.

Thanks Santosh and Madhav. Glad to be appreciated by seniors in the community.

Thanks a lot shruti,

Now I understood the concept of varients clearly. I have to say its a fantastic document. Keep rocking with more useful docs.

In second Saturday as Half Day senerio   (Example 2: Every Saturday should be a half working day.) where do we have the condiion. i underestood Holiday class, Day BUT not the HolidayClass Next Day. Please explain me  .....

HolClNextDay is an indicator that defines which are the allowed holiday classes for the next day. In example 2, since the rule requires to be written only for Saturday without any restriction on whether the next day is a holiday or not, thats why you see all positions in that field marked with X, meaning that Sunday can either be a public holiday or a working day. Irrespective of that Saturday needs to be a half day. However, if we twist the requirement a bit and say that Saturday should be a half day only if public holiday falls on Sunday, then in the HolClNextDay field we would have put X on the second position for Holiday Class 1 to represent that the rule is applicable only when the next day is a public holiday.

Hope I was able to clear your confusion. Do let me know if you need further understanding.

Thanks for the explaination i am clear now could pls tell me know how to assign the dws variant for a particular day in WSR .

Thanks a lot for the useful document

I was searching exactly for such an explanation. Really spoon fed. Thank You.