1st SAP CodeJam in Aachen on ABAP in Eclipse

Today the SAP CodeJam community saw two premiers. The first code jam in Aachen and the first day in code jam history with three parallel events. Besides the event in Aachen there were also code jams happening in ‘s-Hertogenbosch in the Netherlands and in Hamburg. So the magic SAP CodeJam triangle for today looked this. 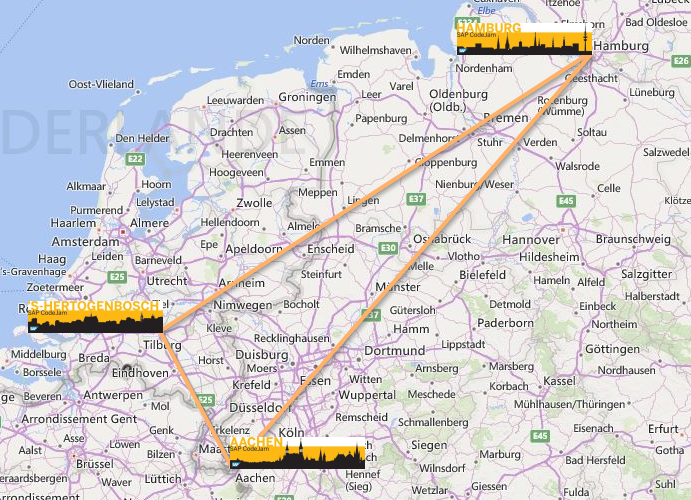 Two of the code jams, Hamburg and Aachen, where on ABAP in Eclipse. This had the nice advantage for some QSC colleagues from Oberhausen that they didn’t need to travel to Hamburg to the code jam organized by QSC.Instead they could simply attend the event in Aachen.

Sebastian Wolf from the ABAP in Eclipse development team won the SAP internal raffle for the trip to Aachen and therefore joined us as our ABAP in Eclipse expert. After some final preparation, a small fight with the projector and a quick lunch with a Currywurst in our canteen we were ready to start: 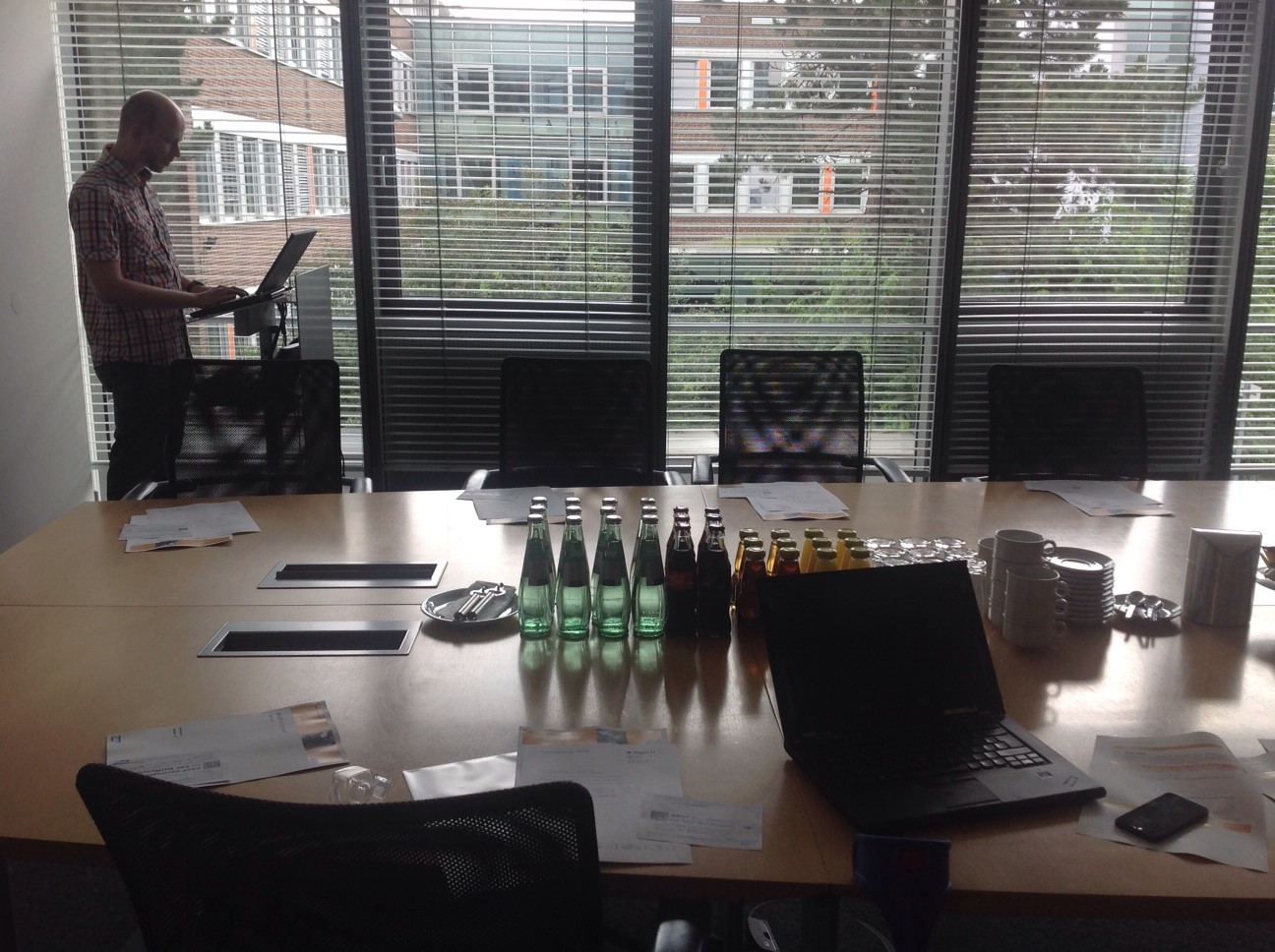 Soon all twenty-something participates arrived an Sebastian kicked off the code jam. The first exercise “Connect to the System” already proved quite difficult and everyone was working very concentrated: 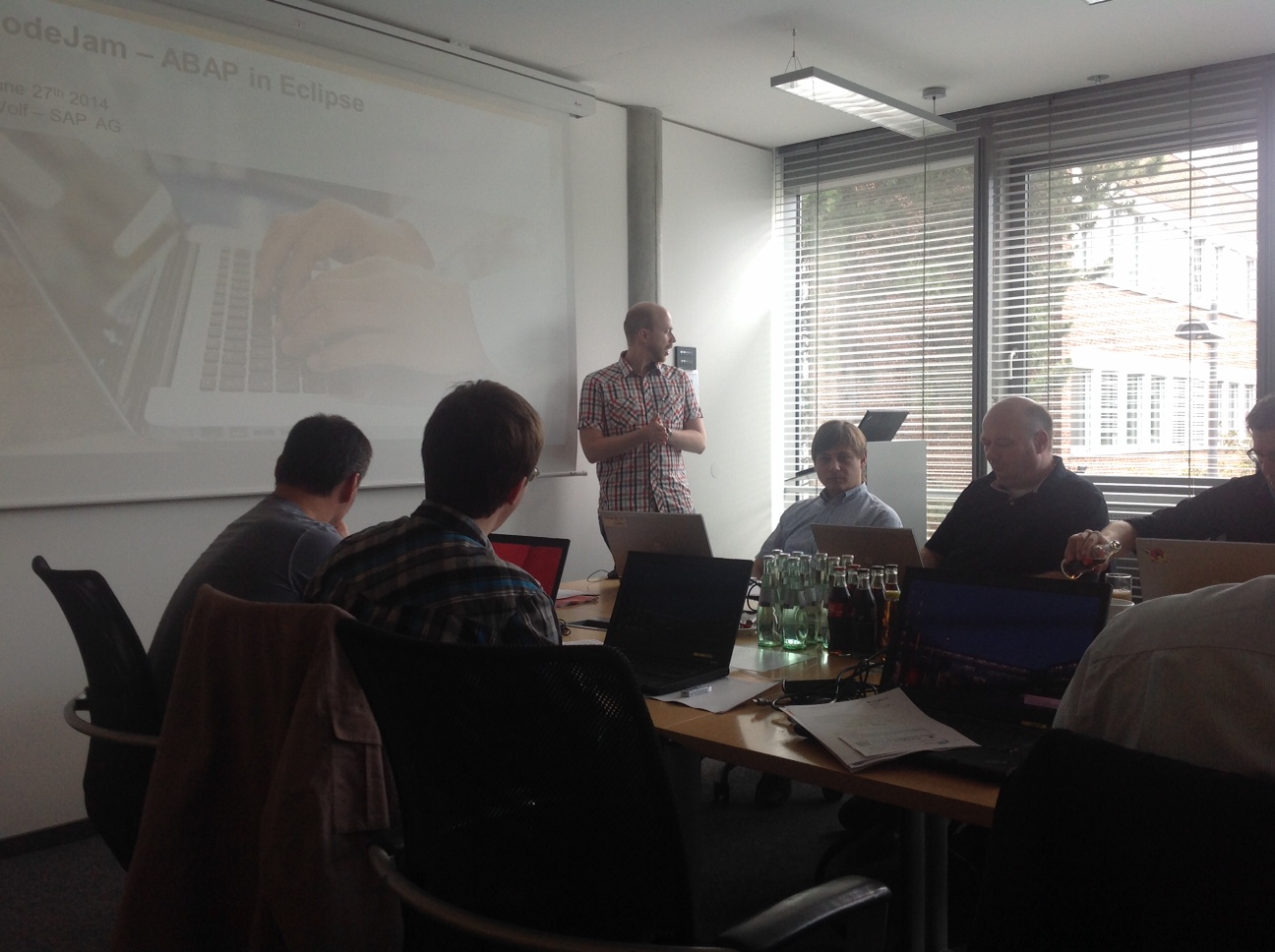 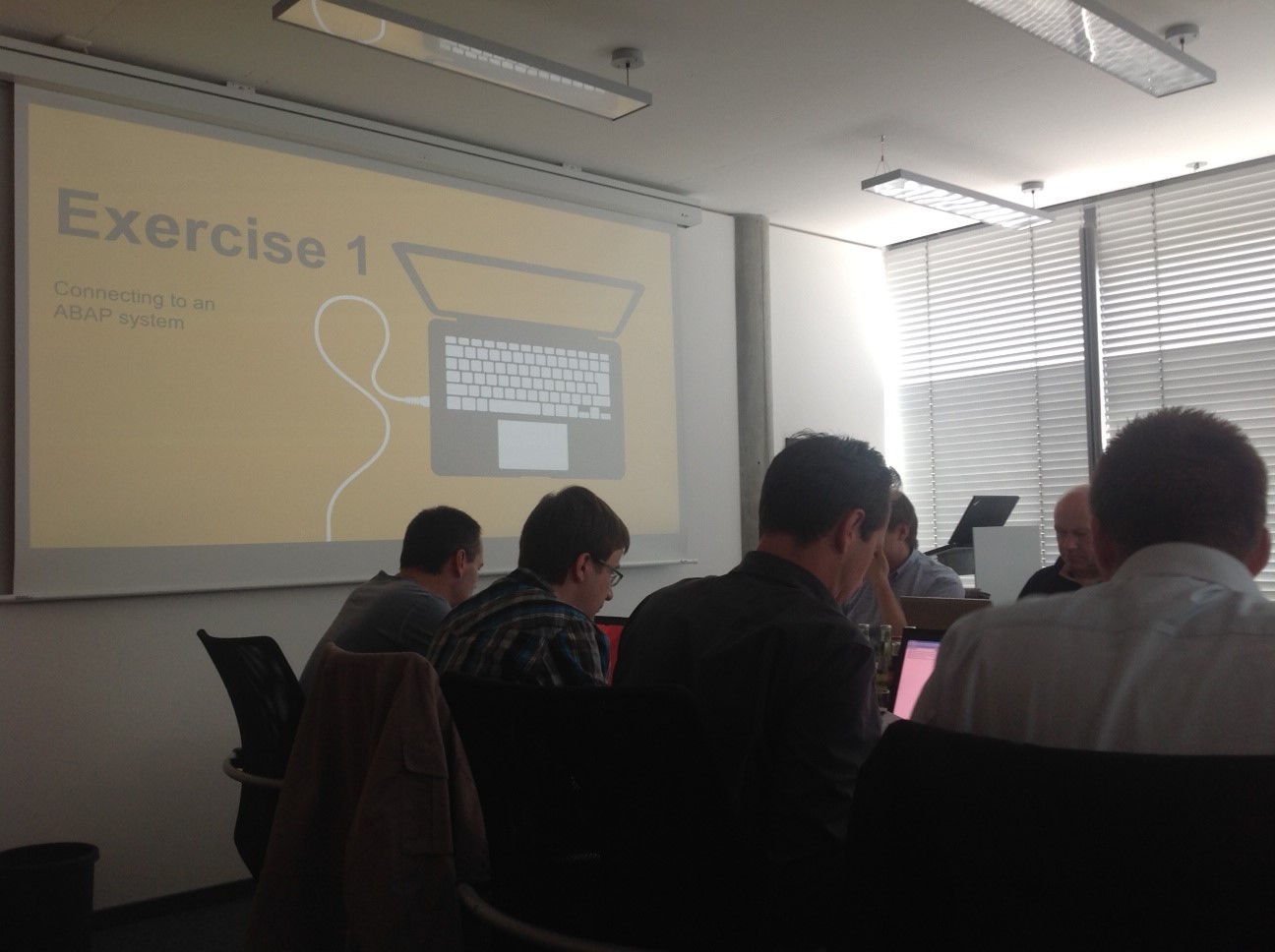 Up until then everything worked smoothly. However, as it happens always with live demos, we suddenly ran into some problems.First, Sebastian’s eclipse installation and started to behave strangely. Soon the installations of some of the participant followed. Code assists and quick fixes took very long to show up or would not work at all. Of cause we started off blaming the ABAP system in the Amazon cloud. So Sebastian suggest to switch to another server. Unfortunately, that did´n’t solve the issues. Finally one of the participants had the brilliant idea to connect to the Internet using his mobile phone instead of the wireless network. And suddenly everything worked for him.

Next up was some live troubleshooting by Sebastian. Due to a very specific SAP GUI installation used by some participants, certain functions like context menus would not work. However, Sebastian stayed calm, managed to find the root cause of the problem and fix it on the fly. So with the help of LTE, two mobile hotspots and our SAP Expert Sebastian finally everyone was able to work and follow along the exercises.

Besides the exercises Sebastian also showed some new and some soon to be released features of ABAP in Eclipse. These included the possibility to split the editor window. This feature will be available with the ABAP in Eclipse release for Eclipse Luna (http://projects.eclipse.org/releases/luna/details). And some new refactorings that will become available in the future. The feature that was most impression to me was the source code of the data base view underlying the <CTRL>-<SHIFT>-<A> (open ABAP development object) functionality expressed in the new DDL for dictionary objects (New Data Modeling Features in SAP NW ABAP 7.4 SP5). The following picture shows a small excerpt of the source code. 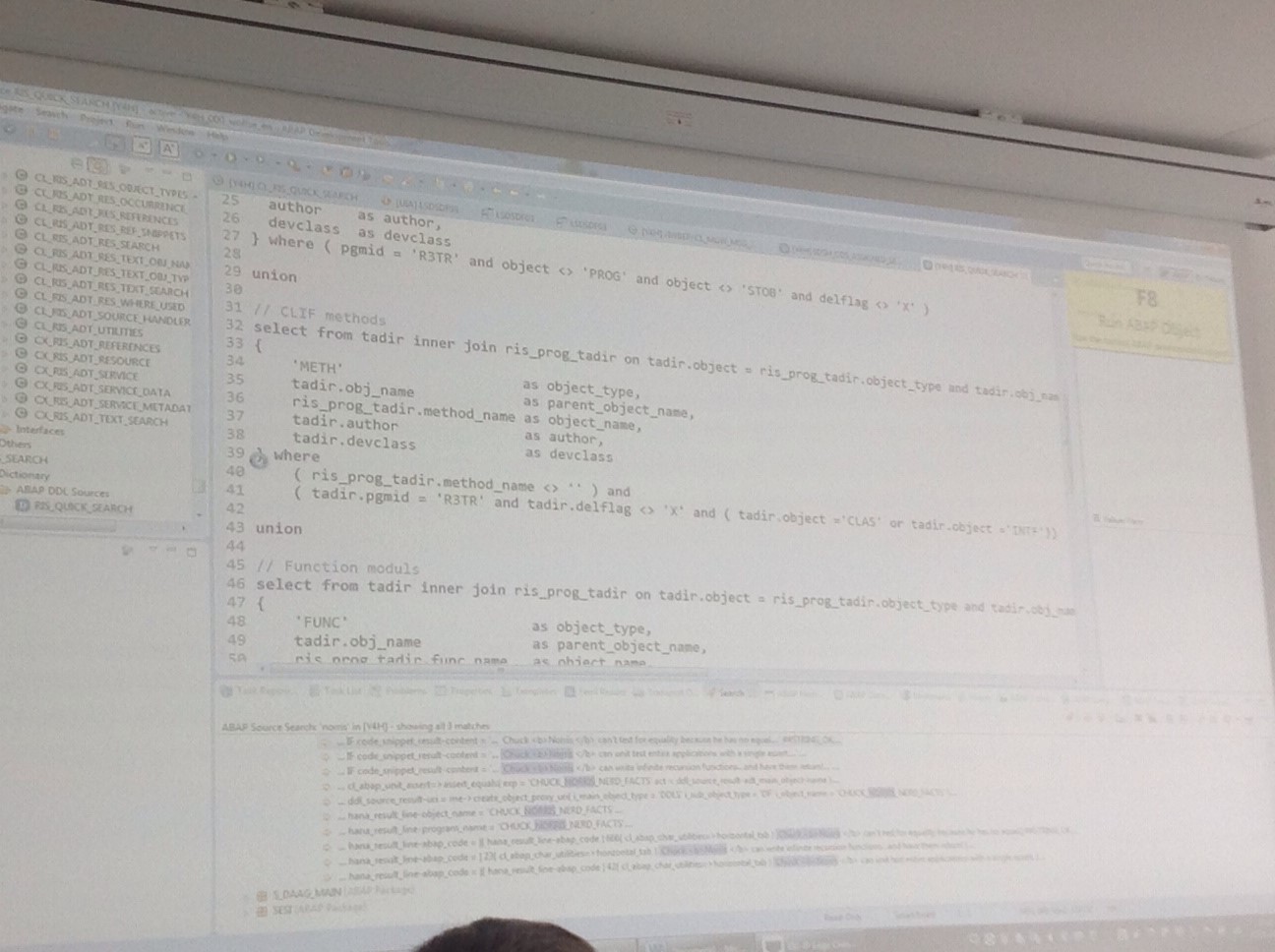 After the code jam had finished and the food and the beer was gone, I was thinking what for me key takeaways of there event were. After some discussions with my colleagues I came up with the following points: 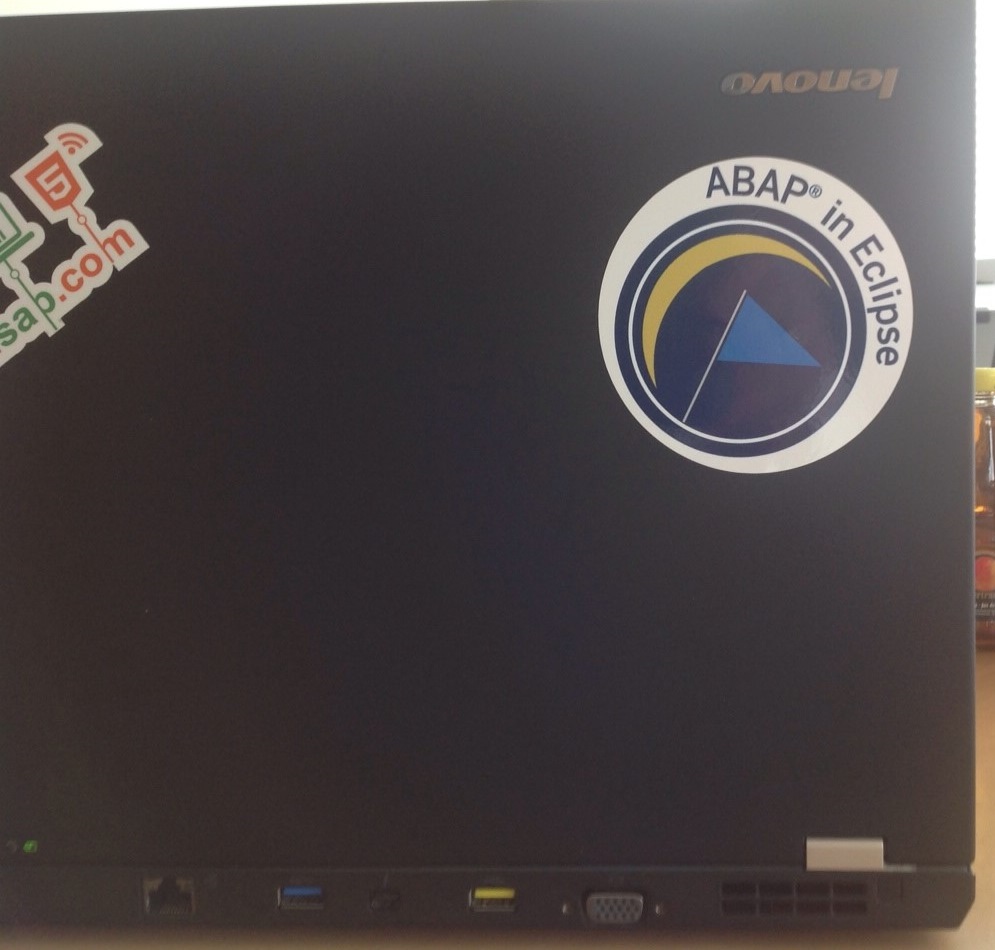 Finally I want to say a big thank you again to Sebastian for the great event!

Thanks for sharing your experience.... Can we get any codejam samples for our practice....