Blogs are meant to express your thoughts and pull the readers towards your ideas. But in countries like India, where population and illiteracy is at its heights, it’s not easy for a blogger to have a wider reach if he relies completely on his art of using words. And when visualization tools like SAP LUMIRA are available, it’s time for the bloggers to prove their point not just with the power of words but also with statistical proofs and eye catching visualizations.

A need to revolutionize mining in India is presented here with analysis using SAP LUMIRA. The facts presented in this blog are collected from the official Government of India website data.gov.in and the Indian Bureau of Mines website ibm.nic.in. I have also made my LUMIRA story public at https://cloud.saplumira.com/open?key=53ACE62C2DC9259BE10000000A4E4243&type=HANALYTIC

Mining provides the building blocks for human development and its distribution varies both in content and quantity. An analysis of distribution of mineral resources and mining leases across the country.

No country is self-reliable in all resources. Export-import is a means to fulfill the needs of all partners involved in a trade. Though it is necessary to import goods that the country is deficient in, efforts can be made for the use of ingenious resources than importing.

Mining is a hazardous profession. Government must strive to bring down the hazards by all available means. It’s disheartening to find how the funds set apart for the safety of people working in mines, is never fully utilized. And the reason for this lies in the Indian political system, with corruption taking deep roots. The death of innocent mine workers can be minimized with proper fund management and the use of latest technologies.

Illegal mining possesses danger to the country’s economy and the safety of people involved. When Indian media busted the illegal mining racket by political bigwigs in Karnataka, the immediate action taken by the Government was to ban mining activities in the state. It was shameful to see all political parties, once enemies now joining hands to save their skin from the shame of corruption. Wasn’t the decision to ban mining as hilarious, as to a ban cars just because they caused accidents? And how responsible are we as citizens, who have voted such politicians to power? These are some of the questions we need to ask ourselves before we cast our votes next time around.

The statistical analysis shows that it’s high time for the Indian Mining industry to wake up to the advancement in the mining sector. The Indian government and political parties need to stop their vote bank politics and concentrate on true development. Funds recovered from illegal mining can be directed towards increasing the safety and standards of living of people working in mines. Mining sector needs to concentrate on inculcating modern techniques, optimal energy utilization and pollution control. The proof is right in front of the people concerned. It’s now left to them, either to accept their failure and work for a better future or to continue in the darkness, even as the world moves ahead.

Though the blog is written as part of a global blog competition, a sincere effort is made to present real time facts about Indian mining. Please like the blog, only if you feel the contents presented makes some true sense.

These visualizations are amazing! 🙂

Keep up the great work.

you have create a beautiful visualization using SAP Lumira.

Very good work in compiling the data and presenting it so well and easy to access. My kudos to you.

Being a mining engineer and after working from 1990-2008 in Coal India, I know "data mining" for Indian mining data is hard work and requires studying lots of multiple sources of information.

I still remember the early days of googling for Mining data used to point to "data mining" but things have changed and are changing rapidly. Your work is surely a great contribution in that direction.

As I come from Indian coal mining background I can assure you that "India is self-sufficient in coal production" as you have mentioned is unfortunately NOT true.

India does have sufficient thermal coal resource but due to multiple reasons the shortfall last year was about 200 million tonnes. On coking coal front India does not have enough resources and is dependent on import from Australia, Indonesia etc.

Please let me know your views.

Firstly,I would like to thank you for your comments and opinions. It was indeed a tiring job to access all the data sets.

Coming to your point on import of coal, I very much agree that India imports coal in considerable value. If you can move over to the 8th slide in my cloud project available at https://cloud.saplumira.com/open?key=53ACE62C2DC9259BE10000000A4E4243&type=HANALYTIC , you can also see that coal is the resource that ranks 5th in terms of value of resource(not quantity) 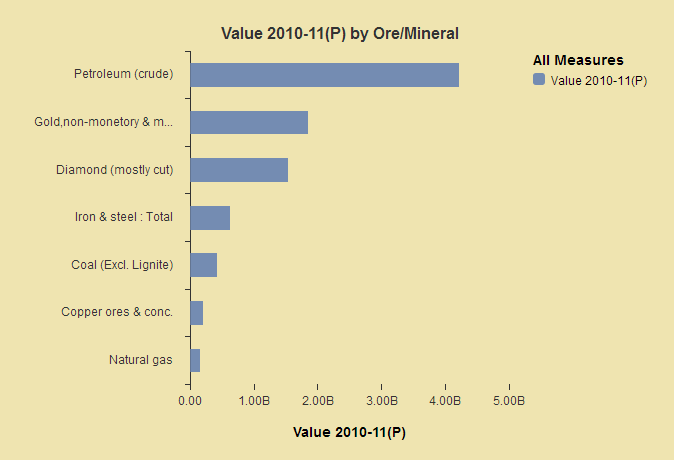 When it comes to energy usage, this can be seen in two different aspects:

What I am trying to concentrate on in this blog is more about the 2nd aspect. Hence in this regard, as per the information I have collected, INDIAN MINING SECTOR is self sufficient in supply of coal for its mining activities.

Since this blog concentrates mainly on mining related aspects, the energy factor is considered only for mining activities. And I very much agree with your view that, India does import coal, which can be clearly seen in the above image.

Hope I have cleared your confusion.

Thanks, Nikhil for clearing the confusion. Once again good work, please keep it up.

This is really good. I am planning to share this good information which is so simplified by your explanation. Keep up such good jobs  🙂 I certainly like it.

hey dude sujay what should we do now