Breaking free from BI (or BW) 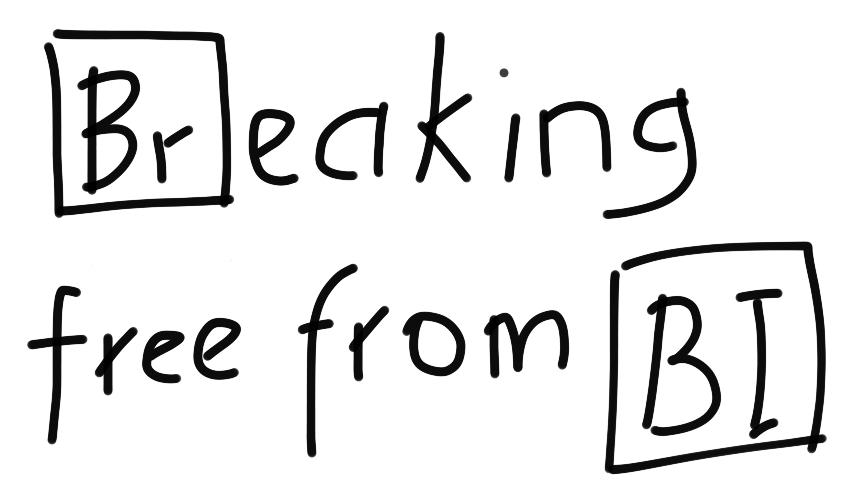 Sooo, have you thought about buying HANA? Ha-ha, just kidding! No, folks, this is not another sales pitch for HANA or some expensive “solution”, but a simple customer experience story about how we at Undisclosed Company were able to break free from the BI (*) system with no external cost while keeping our users report-happy. Mind you, this adventure is certainly not for every SAP customer (more on that below), so YMMV. The blame, err… credit for this blog goes to Julien Delvat who carelessly suggested that there might be some interest in the SAP community for this kind of information.

It might be time to part with your BI system if…

… every time you innocently suggest to the users “have you checked if this information is available in BI?” their eyes roll, faces turn red and/or they mumble incoherently what sounds like an ancient curse.

… you suspect very few users actually use the BI system.

… the bill for BI maintenance from your hosting provider is due and you can think of at least 10 better things to do with that money.

What went into our strategic decision

Personally I have suggested that we simply shut down BI and see who screams, but for some reason this wasn’t taken by the management with as much excitement as I was expecting.

Instead we took a list of the users who logged into BI in the past few months (turned out to be a rather small group) and our heroic Service Delivery manager approached all of them to find out what reports they’re actually using in BI and how did they feel about it. Very soon we had an interesting matrix of the users and reporting requirements, which our SAP team began to analyze. Surprisingly, out of the vast BI universe the users actually cared about less than 15 reports.

For every item we identified a potential replacement option: an existing report in SAP (either custom or standard), a new query (little time to develop), a new custom ABAP report (more time to develop). With this we were able to come up with a projected date for when we could have those replacements ready in SAP and therefore could begin the BI shutdown. It was an important step because having a specific cut-off date puts fear into the users’ minds. Otherwise if you come asking them for the input or testing and no specific due date we all know it’s going to drag forever (there seems to be always “end of month” somewhere!).

So what did 15 BI reports come down to in ECC? We actually ended up with just 2 custom ABAP reports and 2 new queries, everything else was covered by standard SAP reports and just a couple of existing custom reports. Interestingly, we discovered that there were sometimes 3 different versions of essentially the same report delivered as 3 different reports in BI. In those cases we combined all the data into one report/query and trained the users on how to use the ALV layouts.

The affected functional areas were Sales, Finances and QM (some manufacturing reports were and are provided by our external MES system). There was very little moaning and groaning from the user side – it was definitely the easiest migration project I’ve ever worked on. Breaking free from BI felt like a breeze of fresh air.

Are you thinking what I’m thinking?

If you’ve already had doubts in the BI value for your organization or this blog just got you thinking “hmm”, here are some of our “lessons learned” and just random related observations and suggestions. (Note – HANA would likely make many of these points obsolete but we have yet to get there.)

Next Generation ABAP Runtime Analysis (SAT) – How to analyze performance – great blog series on the SAT tool. My weapon of choice is still good old ST05, but in some cases it might be not enough.

There are many SCN posts regarding ABAP performance tuning, although quality of the posts varies greatly. This wiki page could be a good start, use Google to find more. Look for the newer/updated posts from the reputable SCN members. (Hint – I follow them! 🙂 )

Some tips on ABAP query – this is Query 101 with step by step guide, great for the beginners.

(*) or BW? – I’m utterly confused at this point but had the picture already drawn so let’s just stick with BI