According to March of Dimes, 1 in 10 babies born in the United States spends time in a neonatal intensive care unit (NICU).

The rate of divorce amongst NICU parents is believed to be a staggering 97%..

A 2010 study by Stanford University School of Medicine showed more half the parents whose babies were in the NICU for an extended period of time either had Post Traumatic Stress Disorder (PTSD) or were at high risk for developing it. PTSD, of course, is best known as the disorder soldiers develop after trauma in combat. Trauma. After. Combat. It’s just on the home front as a result of the battlefield known as the ICU.

These statistics are all staggering. And I didn’t know until I was one of those parents hanging out next to my son’s isolate in NICU for almost half of 2013. The truth is you never think about the patient – or parent – experience – in a hospital until you’re there. And when you are, you want the best especially when it relates to healthy babies. Thankfully for San Francisco Bay area residents, Silicon Valley is blessed with some of America’s Best Hospitals, including leading Children’s hospitals.

But what makes them great? In my view, best run hospitals have a focus on family-centered care.

According to the American Academy of Pediatrics, the family-centered care movement emerged in the late 1980s at a time of increasing awareness on the importance of meeting the psychosocial and developmental needs of children and of the role that families have in the health and well-being of their children. Much of the early effort focused on hospitals but as research emerged about the effects of separating hospitalized children from their families the concept broadened to include how institutional operating principles and approaches.

At the heart of this concept is the belief that health care staff and the family are partners who work together to make informed decisions to
best meet the needs of the child. I characterize this approach as CARE:

Collaboration –  Inviting patients and family members to work together with staff to develop and evaluate policies and programs. 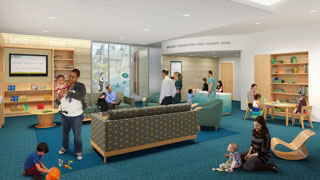 can take part in care and decision making.

Engagement– Encouraging and supporting patients and families in care and decision making at the level they choose.

These are elements I am confident that SAP, Sharks Foundation,  Santa Clara Medical Foundation, FIRST 5 and the Rademakers  family will incorporate into the new Women and Children’s Center at Santa Clara Medical Medical Center, slated to open in San Jose in 2016. As will be thoughtful facility design elements such as sleeping space for parents, natural light, quiet waiting areas, engaging playrooms, healing gardens, interactive art installations and music that go well beyond aesthetically pleasing space but can advance the healing process which can lead to better patient outcomes. Outcomes such as:

Now, I’m not suggesting that great doctors, cutting-edge technology, innovations in treatment and good ol’ luck doesn’t contribute to world class care.
It does. But fancy equipment sometimes can only do so much. CARE takes the patient and family experience further as it puts the patient and family first. Think about to when you were a child. What was the BEST medicine? Maybe a hug for mom or dad? Now that’s powerful stuff.