After completed several DMO projects (BW, CRM and ERP), in order to refresh and a good way retaining memory, is to write and share knowledge gained on DMO parallel export/import phase, by observing and studying its behavior via logs, migration and command files in each and every project done apart from those good sources from sap guide and notes, great blogs and doc in SCN.

In this blog, will merely focusing on how DMO works its magic on migration upgraded/updated shadow repository during uptime and application data during downtime to target HANA DB as depicted in picture A and B, step 2a and 2b (highlighted in red)

Picture A: (Source credit to @Roland Kramer and @Boris Rubarth, Thanks!)

Picture B: (Source credit to @Roland Kramer and @Boris Rubarth, Thanks!) 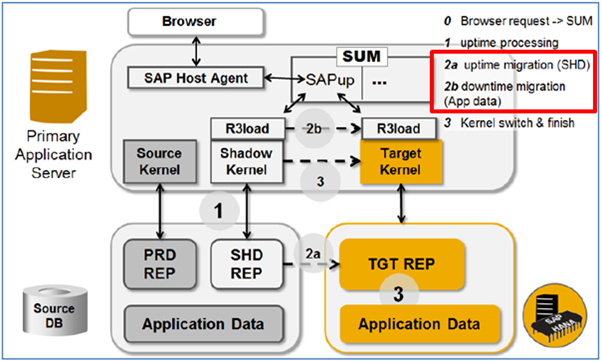 Picture C shown DMO specific phases behind uptime migration during Preprocessing/ Shadow Import. Will talk about the phases highlighted in red, such as how shadow repository and its objects are created and move to HANA Database, how DMO knows which R3load, kernel and binaries to use whilst there are 2 different databases (in our case, source = oracle and target = HDB).

From the above, we know that upgraded/updated shadow repo created in source is ready to move to HANA Database, where clone size will be calculated in 2 groups:  UT and DT and based on the object in PUTTB_SHD tables.

PUTTB_SHD = control tables for shadow import during upgrade, tables that needed to copy and import to shadow

Example syntax for (variables are vary from phase to phase)

Both migrate_ut  & migrate_dt directory contains .CMD, .STR and other files generated by R3ldctl. .TSK files will generated by R3load during export/import with migration result for each table (EXP = Export files ; IMP = IMPORT files)

EU_CLONE_MIG_*T_PRP : Prepare the tables COUNT (*); split tables with certain threshold, produce list of shadow tables and views to be imported, and other details information into the bucket file – MIGRATE_UT.BUC

Both R3loads are running in parallel on the same host. No export files (dump files) are created because the data transfer between the R3load pair happens through the main memory of the host. This R3load option is called memory pipes (currently only for non-windows hosts).

Also, you can see the updated time for export and import .TSK is identical or close to each other.

By the way, how SUM-DMO knows which R3loads/binaries to use since there’s shadow kernel and target HANA Kernel?

DMO distinguish them with source DB (Shadow Kernel) extracted to SUM/abap/exe whilst Target HANA Kernel to SUM/abap/exe_2nd/ during configuration phase.

Above phases are run during UPTIME, and only EU_CLONE_MIG_UT_RUN was executed but not EU_CLONE_MIG_DT_RUN. Again, refer to step 2b in both picture A and B, application data will only move to target Database (HANA) once enter to DOWNTIME. 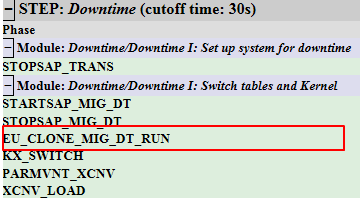 EU_CLONE_MIG_DT_RUN (DOWNTIME): At downtime, entries of application data table (DT) are exported from shadow repo and imported to HANA in parallel, using the pairs of R3load same as phase EU_CLONE_MIG_UT_RUN.

Lastly, consistency of migrated content is checked by COUNT(*) on each table in the source and in the target database. These can be maintain/manipulate in /bin/EUCLONEDEFS_ADD.LST, reference to /bin/EUCLONEDEFS.LST with option below:

Hope this blog will helps other to understand more on DMO. Please rectify me for any incorrect statement. Extra input and info share are greatly welcome!

Is there a limit on the No of R3load process which can be used.

Is there some kind of tracing which we can enable is R3load fails.

How do we calculate the physical memory needed for DMO .

No of R3load process/Memory is still depends on the number of CPU and Memory resources available,  and the recommendation used in classical upgrade and migration is valid and similiar to DMO. However, you can adjust the number of parallel process dynamically for each phase in dmo, refer to the dmo guide.

DMO should run in PAS. Procedure and recommendation for normal upgrade and migration still apply to DMO.

If R3load fails, error message should recorded in /abap/log. To increase the level of tracing, you can refer to note 885441.

I am wondering if you knew what command the DMO runs to check consistency of profiles wherein which it can find duplicate and contradicting entried.

I am looking for the command which DMO runs to find these issues.

No idea. Basically you can resolve those issue by removing the parameter in respective profile (either instance or start). FYI, after upgrade, START and INSTANCE profile will be merged.

Thanks for the extremely useful information above. We are looking to upgrade and migrate a Netweaver BW 7.31 system (on-premise AIX/DB2) to SAP Netweaver BW 7.4 on HANA (in cloud). While looking at the DMO option we get information like DMO does not support a migration/upgrade from a system on-premise to in-cloud. Have you come across any such finding during your experience?

I always find your blogs and posts to be very informative and useful.

Please guide me for following,

1. What caution require while using DMO,

3.Is any video for the same (end to end) or any option for hands-on for DMO

You can refer to the link below  :

we have a requirement to capture the phase wise details to develop a tool to get the information on percentage basis. Can anybosy help on this?

we tried AL11 OS level and we have DMO log files but nothing is working.

You can try SAP CCMS logmon to read the log file. We tried to do this on some of our upgrade to get the mail in case we get any error or any changes in the phases completion. you need to identify the patterns in the log file.

Excellent blog Nicholas, I have a simple question:

After the Upgrade&Migration with DMO from Oracle to Hana of my Develop system, can I use both system ?

I believe you can by installing a new sap apps and point to the oracle db. However, this is not ideal and might not supported, the ideal way is to perform a system copy of source system and perform the upgrade on the copied system.

Thanks, fortunally for me the SUM SPS20 solved my problem.

I have a doubt, I just wrote to Boris, but this is kind urgent for me:

Reading the note 237738, I have a doubt about the step below

The new BR*Tools 749 are supported only  for AIX 7.1, but the operating system release of my source system is AIX 6.1.

So I can’t install the new BR*Tools 749 (R3load, ecc ..)  on my source system, which is a prerequisite to start the Upgrade/Migration !

I’m I rigth or it is a false problem ?

What's your target DB? If your Target DB is HANA and not oracle, this shouldn't apply to your case. However, if BR*Tools 749 is not supported on your OS, you and use any BRTOOL that is higher than 7.40 patch level 10.

Nice blog Nicholas Chang, just want to understand if we can use DMO with parallel export/import for any cloud (means no DMO with move option) using memory pipe method.

I believe that's the restriction, way before DMO with move option, cross data center/cloud migration with DMO is not supported by SAP.  However, logically it should works if you have a very stable and fast vpn connectivity between source and target, and ensure 0% of network glitches. Just my 2 cents worth, you can test it with your own risk. 😉

Nice Blog 🙂 I have a query here.As in your blog in picture B i see that migration will be done before upgrade.So in case if i have an old release system like ECC 6.0 EHP 3 or 4 & in case of classical migration i would be first upgrading the system to EHP 7 then i would migrate it to HANA but if i run SMO DMO in this system how its going to migrate first because ECC 6.0 EHP 3 or 4 wont be supported by HANA.

The target release repo will create on HANA during uptime.

Hello.  Some time has passed since this blog. On DMO 2.0, does SAP now support DMO with move option from on-prem to cloud(?) assuming that the vpn and pipe from source to target is fast and stable?

Hope this blog answers your question.

Hello Nicholas - I am planning to migrate my CRM / ORA DB system to HANA DB with DMO only (no update/upgrade), but in configuration phase it gives me below error,

Any insight about this error ?

The update process identified your system as a BW system with active process chains
or RDA demons. Therefore the 'Destination for Import Post-Processing' has to be maintained
with the following transactions: