Hi,
In my last blog I talked about integrating single Fiori apps into Mobile Portal. Of course, this will only work as described for Fiori Wave 1 apps, as the apps in the later waves are built to run in Fiori Launchpad, their role-based entry hub. So, today I would like to do the second step and share my experience when setting up a new demo on Fiori Launchpad. I worked with Fiori Launchpad on ABAP, as this was the first one released.  I did not really have to start from scratch as the landscape was already set up, but noticed anyhow that some kind of step-by-step guide would be helpful, when first diving into the world of Fiori LaunchPad.

Those are the most important steps:

1. Make sure your landscape is correctly set up with SSO. You need to install the ABAP Frontend-Server which contains SAP NetWeaver Gateway and the frontend compontents to generate an SAP Fiori UI. On your backend system, you also need to install some add-ons, the backend components  which provide the business content for the Fiori apps. This is described nicely in the documentation.

2. Do some initial Launchpad configuration steps like maintaining SAP Gateway OData Services and the SAP Web Dispatchers and activating the required UI5 applications. These are also described in the documentation (here for NW 7.4).

There are already predefined catalogs and roles for all Fiori applications, so you just need to check the documentation on the names of the roles you need. You can find lots of information at http://help.sap.com/fiori.

If you would like to create your own custom catalogs, here is what you have to do:

3. Open the Fiori Launchpad Designer at https://<your server>:<your port>/sap/bc/ui5_ui5/sap/arsrvc_upb_admn/main.html?scope=CUST and login.
4. On the left side, you see the list of catalogs assigned to your user.
5. Click the plus sign at the bottom of the list to add a new catalog.

6. Give it a title and an ID.
7. Now your new catalog opens and you can add content to it by clicking the + sign in the empty tile, which brings you to a page with the tile templates you can use.

You can either create a Static or Dynamic App Launcher (used to launch an application), a news tile or a target mapping. The difference between the static and dynamic app launcher tile is that the dynamic tile displays some dynamic content (a KPI, the no of open items, or something similar) while the static app launcher just shows some static content, an icon in general. The news tile is used for cycling articles from one or up to ten RSS feeds.

Finally, the Target Mapping tiles map intents (=semantic object+action) to navigation targets, i.e. applications that are defined in LPD_CUST. If you create a new application and want to launch it from a tile, you have to register it in LPD_CUST first. Then you can define a target mapping which assigns a combination of a semantic object and an action to that application in LPD_CUST, so you can reuse this intent in several app launcher tiles in your catalog to call the application.

8. You can also create a new group of tiles. The group is a subset of the catalog and contains those tiles that the user should see on the homepage of his Fiori Launchpad. The user can then personalize his view and add additional tiles from the catalogs he is assigned to. Select the Groups tab to do so and click the Add Tile tile to assign more tiles from one or more catalogs to the group. 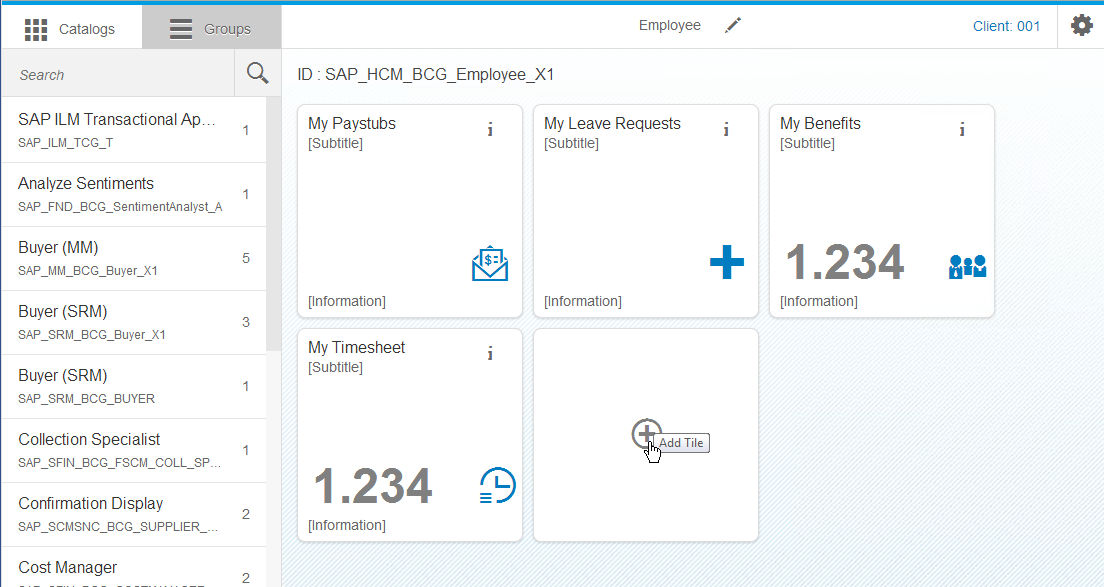 9. To assign your new catalog and group to a user, go back to PFCG in your Gateway system and create a new role (or edit an existing one) to which you can assign the catalog and the group. All users with that role will have access to the catalog and will see the group in their Fiori Launchpad.

10. So, finally assign the role to the user(s) and you are done.

11. The user can now logon to https://<your-server>:<your-port>/sap/bc/ui5_ui5/ui2/ushell/shells/abap/FioriLaunchpad.html and see the new group in his Fiori Launchpad.

Hope that was useful!

This is great information.  Is it possible to restrict the user from having the ability to customize or add new tiles?  Thanks!

yes, the admin can turn off personalization, if required.

Can you point me to a document or link that shows the details for turning off personalization?  Thanks so much!

Nice blog, however, I don't know what happened that my Admin(CUST) page is not showing anymore, has SAP updated the launchpad for everything to be in a single place now?

When I open the link: http://server/sap/bc/ui5_ui5/sap/arsrvc_upb_admn/main.html?sap-client=100&sap-language=EN

It says Application Name is invalid in that BSP Exception page.

Thoughts? Am I missing something?

But it is possible that you do not create a group in the blog?

I just see how to add a tile to an existing group.

yes, correct. It seems I forgot to describe this step.

Thank you for your feedback,

Can we add sap hana views in sap fiori...

If so can you please let me know the steps.:)

additional to the your other thread:

How do we connect Sap Hana view in Sap Fiori la... | SCN

Stefan thanks a lot... for you valuable to time spent for me.. 🙂

Hi Sibylle,
Thanks for sharing the information. My question is how can we add custom Fiori tiles to pre-defined groups (begin with SAP_ )? When I did this, I got error message:
Resource not found for segment 'CustomizingRequest'

Have you created a customizing request (se09 - create a tr) and add that TR number in FLP designer. Now try to create catalog & groups.

please find this required  information on the SAP Help Portal.

How do I create the role, so customers can start using this new catalog?