Cloud Foundry, Hybris and the HANA Cloud Platform: Microservices and Beyond

I’ve blogged about HCP and the Cloud Foundry in the past but the new material provides some additional insights into the potential synergies between HCP and CF.

Here is the session from Winkler and Basenach:

There was one slide in particular from Basenach’s presentation that must be examined in more detail. Let’s take a closer look at some of the important points:

Although I’ve blogged about the possibility of Hybris running on HCP, I’ve never see any official material about such migration efforts.

One of the most important insights is the presence of CF-based microservices in the existing landscape.

My assumption is that this sceanrio would only work if the HCP was based on CF (more on this topic later).

I’ve been thinking about what the depicted “common API layer” might contain. I think we should be looking for some sort of API Gateway in the near future in the HCP.

The API gateway sits between the application’s clients and the microservices. It provides APIs that are tailored to the client. The API gateway provides a coarse-grained API to mobile clients and a finer-grained API to desktop clients that use a high-performance network. In this example, the desktop clients makes multiple requests to retrieve information about a product, where as a mobile client makes a single request.

The API gateway handles incoming requests by making requests to some number of microservices over the high-performance LAN. Netflix, for example, describes how each request fans out to on average six backend services. In this example, fine-grained requests from a desktop client are simply proxied to the corresponding service, whereas each coarse-grained request from a mobile client is handled by aggregating the results of calling multiple services. [SOURCE]

The microservices mentioned above originate from Hybris’ Commerce as a Service efforts (YaaS).

[y]aaS is a multi-tenant cloud platform which allows everyone to easily develop, extend and sell commerce services and apps. [y]aaS is based on a steadily growing micro service architecture running on Cloud Foundry as foundation. All services within [y]aaS are exposed through a consistent RESTful API. Besides the API, [y]aas also includes a Marketplace for hybris services as well as 3rd party services, an On Demand Store Front and a Back office application, all running on Cloud Foundry. [SOURCE] 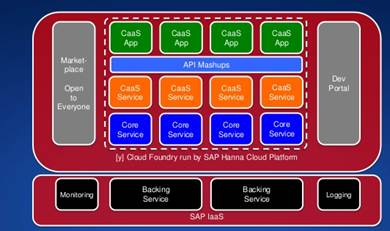 What is interesting is that they reflect a particular domain (in this e-commerce) rather than technology (mobile, ID Service, etc) as in the existing HCP services.

Currently, the HCP only runs in SAP Data Centers (DCs) –Basenach states that in the future the HCP might be able to run in private clouds (either in the DCs of customers or partners). I could imagine scenarios where partner-run HANA Enterprise Cloud instances could be complemented with HCP PaaS instances in the same environments.

Virgo and the transition to Cloud Foundry

In his presentation at the CF Summit, Basenach mentions something very interesting about the future of CF.

I kept thinking about this statement and what it might mean in terms of SAP’s PaaS strategy.

There is very little documentation about the internal HCP architecture but I found an old drawing that provides some details.

Matthias Steiner confirmed that this fundamental architecture still exists (with name changes and the presence of HANA).

The existing HCP architecture uses the Eclipse Virgo project as its foundation yet much of the lowest layer (“NW Cloud Infrastructure”) appears to be proprietary. This lowest layer is the best candidate for a shift to CF.

The Virgo project has had its share of problems including a change of leadership last year when long-time leader Glyn Normington left the project.

Interestingly, Normington works for Pivotal developing “buildpacks” for running Java applications. Indeed, he has already built a build-pack for Virgo for CF.  Thus, a HCP transition to CF appears possible (even with the continuation of the use of Virgo) though I have no idea regarding the efforts involved.

Why would SAP want to use CF in HCP?

The enterprise use of CF is increasing exponentially as demonstrated by a number of new offerings (IBM’s BlueMix, HP PaaS, etc). With this high level of activity, the re-use of a rapidly evolving feature-set is definitely preferable to a proprietary stack.

Features such as recently announced cooperation between Cloud Foundry and Docker (where Normington will also be working!) would also allow SAP / HCP to transition more easily towards the new container-focus in the PaaS arena.

Improve the ability of partners to host HCP instances

As mentioned above, HCP installations in private clouds are also planned. Partners would probably be more familiar with CloudFoundry-based PaaS’ operations rather than the proprietary PaaS stack currently in use in the HCP.  The active promotion of CF in such private clouds is also one of the contributions of SAP to the broader CF community.

Increase the developer ecosystem for HCP

HCP still uses a propriety command line interface to interact with the underlying Paas.  For example, here is the command concerning hot deployments:

The use of a CF as the underlying PaaS framework would make the lives of developers easier in that there is a much larger community that already has experience with CF. For example, IBM’s CF-based BlueMix Paas, the deployment process uses the well-known CF commands.

CF is just the fundamental technological framework for a PaaS. It is not, however, a PaaS offering that customers can purchase.  As mentioned above, there are a variety of CF-based PaaSs available.  Pivotal also has its own version of a CF-based offering entitled Pivotal Web Services.  Thus, the use of CF itself really isn’t the main selling point of such environments. Some vendors such as IBM with its BlueMix are pushing their proven IBM infrastructure (“Open Cloud Architecture”) with hard SLAs and global DCs as its competitive advantage.

In this environment with many CF-based PaaSs, how could a CF-based HCP distinguish itself?  Comparing the marketplace for Pivotal Web Services with its services that are focused on technology and the developer (Cloud Forge, IronMQ, SendGrid, etc), you already have something similar in HCP (HANA DBs, Hana Cloud Integration, SMP, etc). I think domain-specific / industry-specific microservices –  such as Hybris’ e-commerce services – must be the main focus to provide a competitive advantage.  This is an area that other vendors can’t cover. Imagine a microservice for supplier (Ariba-based) or employee (SuccessFactor-based) or contract-worker (FieldGlass-based) or invoice (HANA Enterprise Cloud ERP-based).  These are scenarios in which only SAP can truly excel.

Brilliant. Thank you for all this info. Have. just retweeted.

this blog post clearly underlines that you're on top of things and that little happens around HCP without you noticing! 😉

You're indeed asking the right questions and making valid statements and a lot of your reasoning reflects our own thinking here at SAP.

I'll sit down to write about all this the next days... however, one important thing up front: we always positioning HCP as a multi-runtime PaaS. Sure, we started with Virgo, yet our evaluations of CloudFoundry date back a long time and the recent changes in their (open-source) policies played a vital role in making us intensify our engagement recently.

In addition to Virgo, we also support a plain vanilla Tomcat7-based runtime and there are plans for more. We also got the HTML5 app support. Not to forget about the JavaScript-based runtime that is part of XS.

As such, the mindset and architecture principles of HCP and CloudFoundry (Pivotal CF) are very similar and as such it seems reasonable to align on the individual work streams.

We also got the HTML5 app support. Not to forget about the JavaScript-based runtime that is part of XS.

I think it will be very interesting to see what flows from SAP back into CF. There is already the HANA Service Broker for CF - I'd be curious to see if the JavaScript-based runtime for XS follows the same evolutionary path.

the presentation is now available online on slideshare as well: http://bit.ly/hcp_cfsummit2014

Thanks for the "Blog". It was very helpful for articulating the possibilities and building solutions....Very nicely written article I've learnt the key message . . . 🙂

If you are interested in the hybris As A Service area, you can find the recording here: https://www.youtube.com/watch?v=A8kEfY7bA_8

It is important to note that we split our services in YAAS into Core & Commerce Services. Core Services are domain unspecific and help to build services / apps for any domain, where as the Commerce Services (are what is to be expected from hybris) offer all the necessary services to implement a end to end commerce journey.

Thanks for sharing, hope to see more of HANA and Hybris integration, that too over cloud soon.

This is long overdue.

If you are interested in further details on hybris As A Service you can find a recording of our presentation at the Architect Summit in this JAM Group: https://jam4.sapjam.com/wiki/show/YXGHq1OQ3ACdvL8b2hxJoz?_lightbox=true

the Jam link you mentioned above is not working.  Can you give me a right one.

the recording is only available for SAP internal and currently we do not have a publicly available recording. As soon as we have something, I will share it here.