The speed of light matters – Or how awesome is it to finally have an Australian SAP HANA Cloud Platform data centre!

Accessing the SAP HANA Cloud Platform from Melbourne, or how to lose hair quickly.

Map showing why I have so little hair; it’s because the two existing SAP HANA Cloud Platform Data centres (EU and US) are based pretty much as far away from where I live as possible. (nb this is a joke, it’s cos I shave it off every month)

A little known fact about me: I did a degree in Physics and French. From this I know that la vitesse de la lumière dans le vide is approximately 2.998×108m/s. It’s slightly slower in a fibre optic cable (about 2/3c). We didn’t have stackoverflow when I did my degree, but that doesn’t stop me from referencing it here: http://physics.stackexchange.com/questions/80043/how-fast-does-light-travel-through-a-fibre-optic-cable.

However, there are switches and more switches and repeaters and other such gubbins to account for, and also figuring out which route to take, that all result in more slowdowns (not to mention going through our thoroughly out-of-date internet infrastructure here in Australia). So, whilst theoretically data should be able to make it from one side of the planet to the other in a little under 200ms, it tends to take more like 800ms.

Also, there are the pipes themselves. There is a much bigger, faster pipe between Australia and the US than there is between Australia and Germany. Indeed, running a trace of the route that my internet packets were using, I discovered that when communicating to the EU data centre, the info was going: Melbourne, AU –> Sydney, AU –> San Jose, USA –> New York, USA –> London, UK –> Frankfurt, DE –> Walldorf, DE. So any data going to and from the EU data centre was pretty much waving as it went past the US data centre.

So how does this impact in the real world?

Something else to note there – the core part of UI5 “sap-ui-core.js” took 2 seconds to load from the EU and 1.74 seconds from the US.

So what’s the answer?

1) Move to Walldorf or New York.

3) Build a data centre here in the best place in the world.

So, whilst my French isn’t so bad, my German is. And the US is just not going to happen – visit, yes, live, no. And my mere honours degree isn’t going to lend itself to advancing science in a 20 year leap overnight, so there’s one solution. Fortunately, option 3 (it really should have been option 1 all along) was what SAP decided to do.

As one of the SAP partners who’s been closely involved in the SAP HANA Cloud Platform for the last few years and has been working with SAP during this time, we at Discovery Consulting were offered the opportunity to test drive the AU HCP data centre before the official launch.  Got to love it when frequent flyer points start to pay off!

Here are some comparisons that I think will make your mouth water if you are based in Australia.

Compared to the EU load time of 24.84 seconds and 13.17 seconds for the US page, the AU page loads up in 2.87 seconds! That’s a huge improvement. Notice also the sap-ui-core.js – 91ms! That is 200 times faster than loading from the EU. Mobile apps using the public UI5 libraries suddenly look like they might be possible!

Page load in seconds depending on data centre from Chris’ house in Melbourne, Australia (based on a highly statistically irrelevant sample of one try per site (from zero cache)) 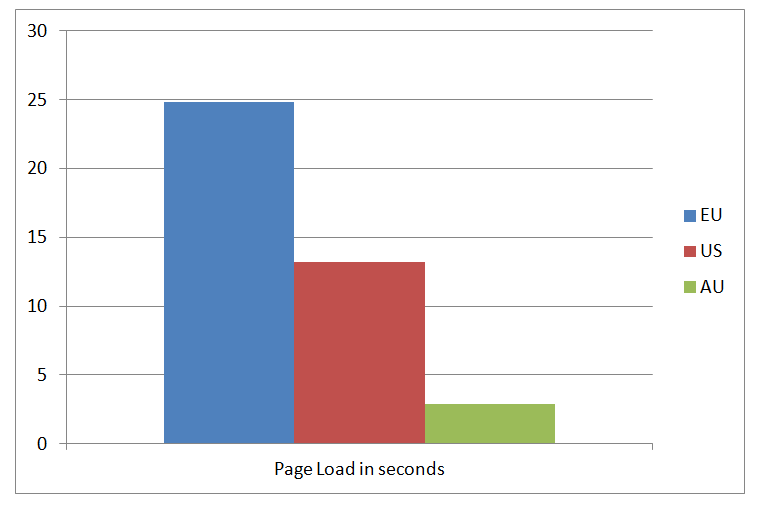 I have accounts at both the EU and US data centres and regularly deploy applications to these accounts.

As an example (NB nothing scientific here, just a single, “reasonably representative” (i.e. seems about right by me) sample), I decided to time how long it would take to deploy one of my apps to all three data centres and have it start.

The app uses a HANA db, Spring Framework and has a simple UI5 front-end. There’re some cool things it does (but that’s another blog post). The deployable WAR file weighs in at around 30MB or 29,899,875  bytes (it’s amazing how libraries add up once you start using them!)

Not quite so groundbreaking a change here, but this is mainly due to my local Internet connection (it can only push 30MB of data out so fast). In each case it took about 1min 20sec to start the app once published. Nevertheless this is still an improvement!

Whilst I don’t think it’s likely that having an HCP data centre in Australia is going to help me grow back my hair, I do think it is going to remove an awful lot of frustration through having a much faster response time. Even better, AU businesses that previously were concerned about their data going overseas are now able to extend their SuccessFactors and other SAP Cloud solutions using an Australian based extension platform.

I also think that on-premise customers of SAP stand to benefit from leveraging the new Australian data centre. With Fiori being available as part of maintenance now (see all the blog posts from SAPPHIRENow over the past few days), I think we’ll also see a big swing of interest to Fiori-as-a-Service running from the SAP HCP. Here (as well as elsewhere), Australian companies stand to really take advantage of the cloud to try out what Fiori could mean for their businesses.

If you are based in Australia/Asia Pacific and are interesting in leveraging the power of SAP HANA Cloud Platform to bring enhancements, either to your existing on-premise SAP solutions, or to your SAP Cloud SaaS solutions (especially SuccessFactors), please get in touch! We’re one of the most experienced group of adventurers in this area, working closely with SAP, and are constantly on the lookout for customers to work with, to advise on and help build solutions using the SAP HANA Cloud Platform.

Good blog (the page load chart is especially impressive) but I have one question about the new data center:

Even better, AU businesses that previously were concerned about their data going overseas are now able to extend their SuccessFactors and other SAP Cloud solutions using an Australian based extension platform.

I know that HCP-based apps can use the new data center but is the new DC available for SuccessFactors as well?  Having an app use data / functionality from two separate DCs (one in US and one in Australia) probably isn't the best scenario.

SuccessFactors have had a presence in the AU DC for over a year now. However, I hear that all systems may be physically relocating to the same "cage" whatever that means. So Australian customers will be completely in the one data centre cage (correction as prompted by Thomas and Andy - they are already in same data centre 🙂 , I was aware, but obviously typo'd that one big style).

The unfortunate thing is that there are no SuccessFactors demo systems available here in Australia, so whilst my extension may run much much faster, the pulling and pushing of data to the SuccessFactors system in demos is still a little slower. It is kinda fun that the extension is more responsive than the application it is extending though! 🙂

For actual customers (rather than us poor souls trying to sell to them) this is a huge win! All data in Australia, including extensions.

The next step, of course, is the DR systems, I believe these (from discussions at the Cloud Connect conference) may be coming either before year end or slightly after.

Glad you liked the post, I've got a few more to share, just need to find the time!

according to this blog they're all in the same DC

Hi Sven, we'd love to have demo SuccessFactors systems in Australia though!

Understand, but to demo you dont really need it in the AUS data center...

You know I love your posts, Chris!

For the DC location: HANA Cloud Platform, SuccessFactors and Cloud for Customers are in the same building but in different cages. So latency is next to zero.

Thanks for the clarification Thomas, Quite honestly, I'm still not sure what a "cage" is, but I do like the idea of next to 0 latency between the systems. In the same building is certainly good enough for me!

I really do hope with the expansion of the Australian data centre capacity for SAP, that we'll see a demo SuccessFactors instance thrown in there soon too!

No SuccessFactors demo instances planned so far in Australia as far as I know. Today primarily production accounts - so technically for all the customers using SFSF extension partner apps - latency to SuccessFactors will be zero.

Will update the thread if I hear otherwise.

I think it's worth linking - like Andy Silvey has already done, Thomas's post which give some more details:

It's been a pleasure for us to have your continuos support. Hope that the Sydney DC will help you to build more amazing apps and demonstrate what's possible with HANA Cloud Platform!

Impressive what times really are needed here for data transmissions.