Millennials and Design Thinking and SAP HANA…oh my!

If you attended Bill McDermott’s keynote (or watched the replay) at SAPPHIRE NOW 2014 in Orlando, you were introduced to three special guests. Polyglot Tim Doner, Ayna Agarwal of She++ and DJ Focus -Kelvin Doe attended and spoke during the opening keynote. These weren’t the usual speakers for an enterprise software event. They were young, entrepreneurial and following their passions to change the world.

Later that day, I was honored to have all three of them join me for a Design Thinking-inspired session at the SAP Services Lounge. The session challenge they attended was “How to make the world better with HANA”. It was really impressive how quickly they were able to feel comfortable and jump in with both feet. Our graphic recorder Heather Willems from @imagethink captured the story in the picture below. 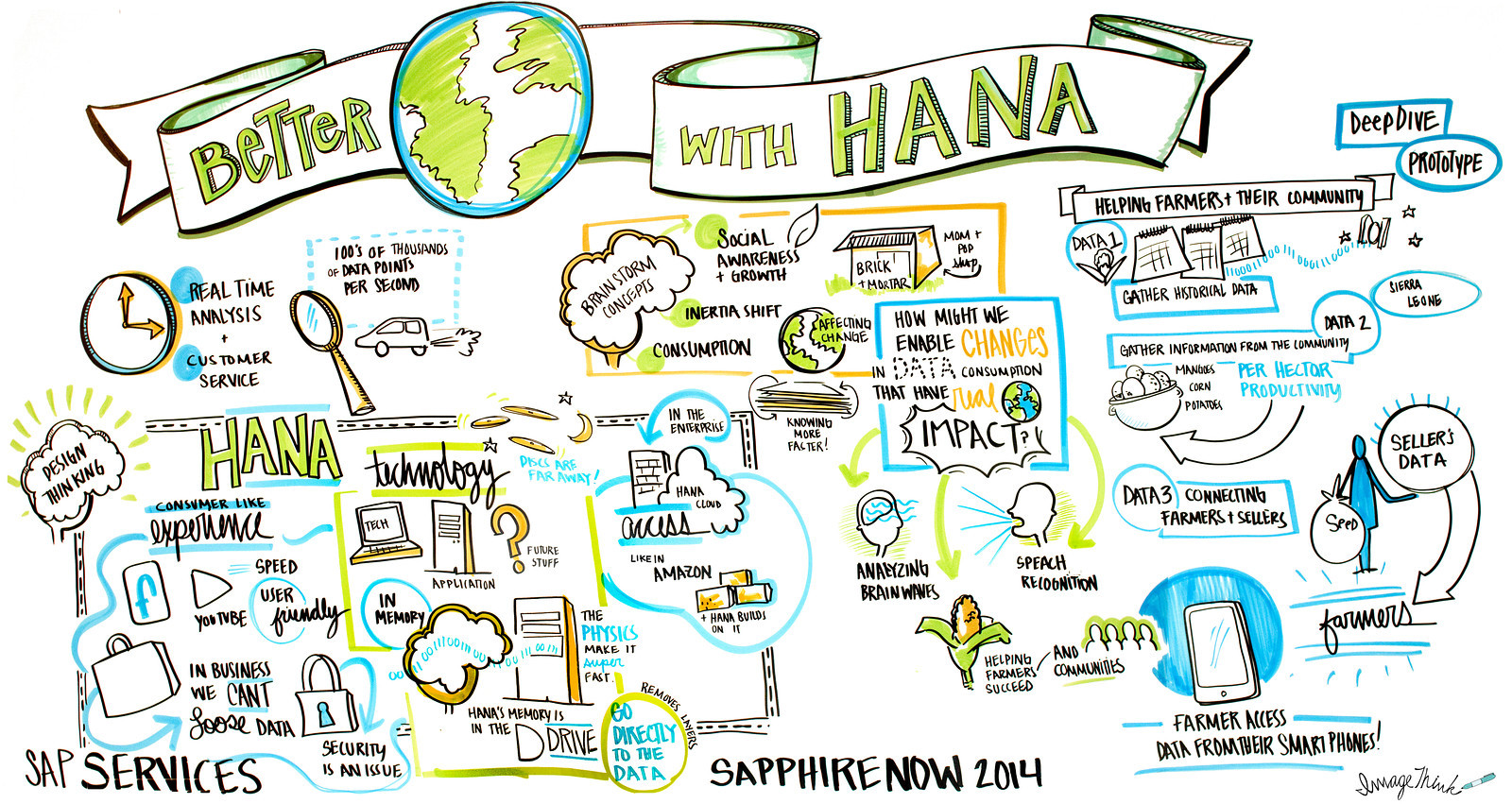 We started with a brief introduction to HANA – thanks to Wesley Mukai for a great 10 minute crash course! As we then developed the initial challenge the group quickly coalesced around a reframed version:

How might we enable changes in data consumption that have real world impact?

This statement was molded from their initial brain dump that ended up clustered around social awareness/growth, changing data consumption, and a shift of inertia. They wanted to affect change at the brick and mortar/mom and pop level. In essence it was all about leveraging HANA to break down barriers so the data was being consumed at the lowest individual or grassroots level.

Next we used an individual brainstorming exercise to open up the solution space. I asked them to also come up with ideas that were impossible or illegal to spark some potentially different solution possibilities.  Here are a few examples:

Ultimately the team prioritized an ‘idea’ for prototyping that blended from ideas from each of them. They created a platform for agriculture in developing countries (specifically, Sierra Leone) for sustainable farming at the individual level. By bringing together data on historical climate, productivity, scientific research, from buyers/suppliers/wholesalers/sellers, specific crops and their yields, amongst others. This is all connected at the individual farm level, via channels such as smartphones, to promote ‘social capitalism’ such that both individual farmers and their communities succeed.

The group presented their prototype for validation. The feedback for what was accomplished in a short 75 minutes was extremely positive. A representative from BASF validated the prototype concept as something that they had been working on for many months. The millennials were also questioned regarding monetization – first thoughts were of leveraging either social clout or a ‘freemium’ model at the outset, followed by adapting the business model to other revenue streams.

What did we learn?

I saw some interesting parallels between the millennial mindset and the design thinking mindset (more on this in my recent blog). They focused immediately on social and community aspects of the challenge. Doing so demonstrated a higher comfort with empathy for others than I typically see from design thinking participants in the traditional corporate environment. And each of their ideas focused on leveraging the power of technology to bring the granular data and insights to the individual level. For me, design thinking gives a voice to each individual and I felt this somehow coming naturally from our young guests.

In the end, it seems to me a company that adopts tenets of design thinking is a great match for the millennial mindset. Could SAP be such a destination?

This is interesting and helpful feedback. My current customer will have an SAP user base comprised of 65% millennial employees. The more we can understand how the generation thinks, works, and learns, the better we can meet their needs and improve our programs. Thanks Jeremy!

Thanks, Amy! It was really interesting and I've got another blog coming more focused on the 'future of work' based on this and some of what Clayton Christensen talked about when he was on stage with Hasso.