Docker – Containers In The Cloud

Docker is an opensource virtualization technology which packages your compute environment into a container, which can then be started, stopped, saved and shipped to other clouds/datacenter in a transparent way. We all are very familiar with technologies like VMWare or Virtualbox where we can get an image of the system and run it anywhere we have the player for them installed. Well Docker is similar except that it is native ( with a very thin wrapper ) to Linux kernel.

What problem does Docker solves ?

Imagine you could build a service in your laptop, package it as a container and ship it to be deployed in your linux datacenter or cloud or someone else laptop.

Imagine you could also version your service package and only ship the bits which are different, saving huge amount of bandwidth. You could also start the container on demand basis, assign memory and CPU to it, get the work done and shut it down. In short Docker standardizes your virtual appliance that can then be transported anywhere, where Docker is supported and could be started. Following are few advantages.

Imagine that you have built an application. It’s a general web based application which has a database, a programming language, a server on your local laptop.

Now you want to deploy this application in your data center, what do you do ? you re-install all the dependency on your data center, configure them and start behind a load balancer. But before that in an enterprise environment you have to do the same in Dev and QA.

Now suppose in production you have two data centers, now you to install, configure and deploy all of the same in all the data centers.

In all the above, you would face huge challenges just in installing and configuring things. Let alone running and fixing production bugs. Instead if you had Dockerized your application, then you can ship the container to your data center, VMs or Cloud and fine tuned the resource allotment with just a few commands.

No need to install and reconfigure your application dependency from scratch. The container is standard and can run anywhere. More CPU and Memory and other resources can be allotted. If you change something then only the different bits are uploaded to your data center or cloud.  This is the exact transport model of all shipping corporation in the world. The shipping container abstracts as to what is being shipped in a standard package, which goes from source to target via various transportation ,echanism to it’s destination.

By this abstraction you can save enormous amount of time in developer operations and focus more on business of application development.

Install latest Ubuntu x64 ( currently 14 LTS ) in your VMWare or Virtualbox, boot it up and issue following commands into the terminal.

At the end you should have docker installed on your system

Step 1. Create a Dockerfile in the current directory which looks like this

Step 2. Create a server.go file which looks like this

Again you can use command – gedit server.go and paste the following content.

Step 3. Build the container with following command – sudo docker build -t godock .   # there is dot in the end 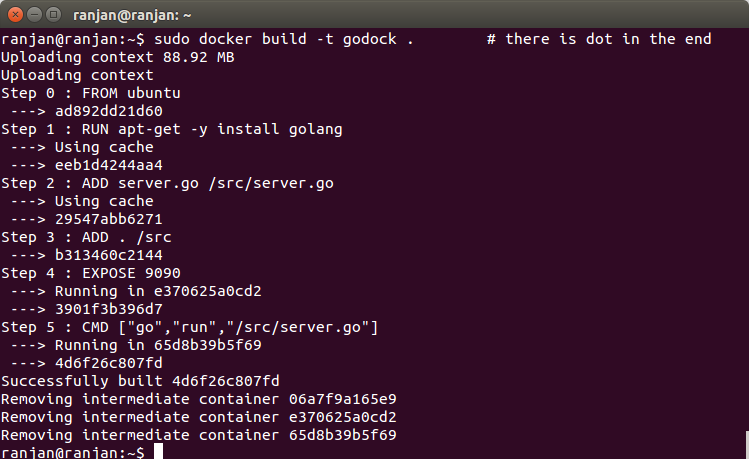 Step 5 : Go to URL http://localhost:9090/hello in your browser and you will see the result.

I'm following your guide, but I'm having a problem while retrieving the golang package and the error is "E: Unable to locate package golag".

I'm quite sure that it's due to SAP proxy, indeed if I include the line "RUN apt-get update" in Dockerfile, when building, I see a list of "Failed to fetch http..." and "Could not resolve 'archive.ubuntu.com'".
I also tried to follow the suggestions from here http://stackoverflow.com/questions/22179301/how-do-you-run-apt-get-in-a-dockerfile-behind-a-proxy
But nothing changes...
Do you have any suggestion to solve this problem?

Thanks for the comment & sorry for the late reply, I hope it would have worked on your side by now.

If you are behind a proxy, then you have to add the proxy config as well in the file.

Take a look at this.

internet - How to use a proxy on the command line? - Ask Ubuntu

Hope everything works out for you...

I had the same problem, probably because i wasn't using the exact docker configuration as the author.  I was able to make it work by adding a line to the Dockerfile (shown below), which runs apt-get -y update first.  That allowed the next apt-get to find golang.

#I added this line below

I also had to update server.go to add missing line "package main" as shown below:

#added this line below

Hope that helps someone!

I Had same issue. are you running it within SAP network or monsoon VM?

I have also been using Docker (in conjunction with nodejs), but am wondering how we could benefit from this in the SAP World?

It would be great to be able to run docker containers in the Hana Cloud...

I think there were some slides which showed that SAP internally is looking at Docker.

Whether it will be leveraged at a large scale in SAP Cloud remains to be seen in the future.

I've heard that SAP IS running Docker containers in the cloud; specifically, to run Hybris in the cloud.  Do you know if this is true?  And if so, any slides you can share to show the supported business processes?  Perhaps it's premature, but worth the ask...

I haven't heard that hybris is using Docker but I do know that they are using Cloud Foundry and micro-services.

I've heard that SAP IS running Docker containers in the cloud; specifically, to run Hybris in the cloud.  Do you know if this is true?

no, that's not true. However, we do have plans to support Docker in HCP as outlined in our roadmap (p. 20).

Is it possible to install standard SAP ERP in Docker? I mean, multiple standalone installation in one server (using docker)

I presented a paper in Cloud Computing Expo on using Docker Containers for IoT and in particular on Gateways. I can share the details if someone is interested

Thank You and please add the link for your presentation.

Here are the slides

I would like to mention that the Dockerfile can be optimized.

A golang application does not need a Ubuntu base image. The binary can run in a scratch container.

At the end you need only a compiled binary in the container.