In any procurement activity involving the purchasing of goods once the Purchase Order is issued to the vendor and subsequently when the vendors delivers the goods the requester is supposed to post a Goods Receipt in SAP indicating the receipt of the goods. So in simpler terms Goods Receipt refers to the physical movement of the material or goods from the external vendor or from in-house plant production to the warehouse or to the plant procuring the material.

Similarly there could be a possibility of cancelling the Goods Receipt (i.e., Movement Type 102) and so the remainder of the document would provide a detailed view of how it works and the Idocs and tables which are involved in the SRM side during the Creation / Cancellation of Confirmation Document.

In the SRM system, when the Goods Receipt confirmation is done against the Purchase Order apart from the Confirmation document created in the SRM system a material document is also posted in ECC system. The procurement process can be diagrammatically shown in the SRM as below (Extended Classic Scenario) 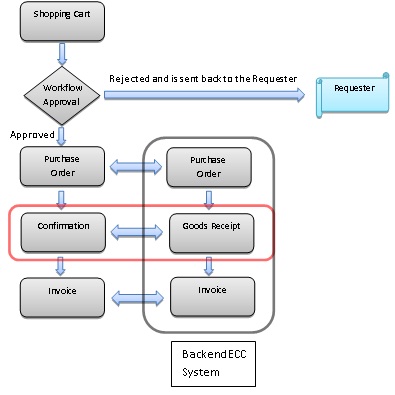 iii) The mapping of inbound Idoc from SRM and corresponding Idoc created in ECC system is maintained in a table “SRRELROLES” in ECC system. The screenshot for the newly created Idoc in the table can be seen in the screenshot shown below

ii) Performing the Return of Goods Back to the Vendor (Movement Type: 122)

So in SRM when we display the Confirmation we can see two tabs either to “Cancel” or for “Return Delivery”. The process explained below can be considered for both Cancellation or Return Delivery.

i) In SRM system when a confirmation has to be Deleted, we select the PO for whom the confirmation is to be deleted. The system in turn would check the “BBP_PDBEH” table and select the corresponding material document posted in R/3 system

ii) When the mapping is found to be correct, and the Material document found in the above table corresponds to the material document posted for the Purchase Order in the backend system the system goes ahead and deletes the confirmation.

Pictorially the Entire Confirmation Process can be explained as below

1.   1. When GR is posted for a PO in SRM system, an Idoc is created with an entry for the material document posted is created in BBP_DOCUMENT_TAB table. Now when the scheduled CLEAN_REQREQ_UP job runs it reads the entries in the above mentioned table and facilitates the posting of the material document in the backend system so that both the systems remain in sync. This is an ideal scenario and this incase the “Cancel” and “Return Delivery” tab in the “Display and Process Confirmation” is present for selection

2.   2. However sometimes the entries continue to remain in the table (BBP_DOCUMENT_TAB) and in such cases the “Delete” and “Return Delivery” tabs in the “Display and Process Confirmation” screen remains greyed out and the Confirmation Document would be in the status “Currently Being transferred”. So as long as the status does not change to “Posted in Backend”, no further changes are possible on the confirmation document. In such cases we need to run the CLEAN_REQREQ_UP job manually to clear the entries present in the table and change the status of the document.

3.   3. Also when the Invoice for the PO is posted in the backend then in this case also the “Delete” and “Return Delivery” tabs in the “Display and Process Confirmation” screen remains greyed out

D    It is necesary to have the Idoc number ranges in both the systems (i.e., SRM and ECC) in sync to prevent the errors during the Confirmation Cancellation / Return Delivery Process. Incase the Idoc Number ranges are not in sync it will result in an error which will not allow the cancellation / return delivery of confirmation documents in SRM.

To illustrate the issue encountered due to Idoc numbers not being in sycn let us consider a scenario wherein the current Idoc number maintained in the SRM system is “X’. So when we do a confirmation in the SRM system, the latest Idoc which will be created and sent to ECC system would be “X+1”. However incase of Idoc number range mismatch in SRM and the one maintained is not the latest one and instead was already triggered during the creation of an older Confirmation then it would result in BBP_PDBEH table being updated with a wrong material document number which was posted for an older Purchase Order.

Tank you for sharing.