Are the Good Times Really Over for Good?

“I am better off financially than my parents and significantly better of than their parents.”

My dad was a baptist preacher, and although this particular vocation is not known as a high income job, my grandfather was more characteristic of the norm of his period as a laborer manually digging roads, laying railroad track, and later working 30 years sewing in a shirt factory.  I can relate to the quote above.  I am better off financially than my father and he than his.  This progression of advancement has almost become to be taken as a natural pace of evolution and guaranteed.  I may vary within my peer group, but as a whole, we are all better off than preceding generations.

In today’s Wall Street Journal (here), two economists debate, “Has All the Important Stuff Already Been Invented?”.  One in particular challenges the notion of this inevitable continued rate of productivity increase and that recent rapid progress in the last century will be an anomaly in the history of economics.  It’s hard to believe that this could be the case with all the current advancements in pharmaceuticals, nanotechnology, robots, and even the emergence of the internet of things.  We can decide how we feel the mobile phone may have transformed our personal lives, but the economist are referring to the more formal measure that better determines whether we can afford the mobile phone or not.  This economic concept is improved standard of living defined by Gross Domestic Product (GDP) per capita increased from productivity improvements.  The only way we can consume more as an overall society is to increase our productivity or otherwise produce more total output (GDP) with less labor.  As part of the interesting dynamic between the two economists presented in the article.  One says, “I think the rate of innovation is just getting faster and faster”.  Mr Gordon responds, “What is the evidence of that?  There is none.”.  The article references that the increase in per capital income, which defines our standard of living, “will in the future take 78 years to double, compared with the 35 years it took between 1972 and 2007.  Further research by Mr. Gordon shows this period is actually much slower than the first portion of the 20th century.

One of the economists featured, Robert Gordon, wrote a 2012 paper, “Is U.S. Economic Growth Over?  Faltering Innovation Confronts the Six Headwinds” (here).  In his paper, he describes the advancements that led to significant GDP enhancing productivity gains in the last century and the headwinds such advancements are facing going forward.  Since, GDP represents the total output of the economy and improving the GDP per person must introduce some significantly labor saving advancement that allows on aggregate more prosperity from the same labor, these advancements must be meaningful at an economic level and not just noteworthy as entertainment as with many recent technological breakthroughs.  Some nations, like China and India, sought as a matter of policy to move more people from agriculture to manufacturing because this category of labor created more output per person and this raised relative wages and standards of living lifting many out of poverty.

The actual innovations that contributed the most were one-time changes that are very difficult to replicate in their labor-saving transformative impact:

Big one-time labor improvements resulted from not taking care of horses, not carrying water into the house, and women entering the workforce during World War II.  Everyone thinks about computers being the big innovation, but most of this was realized in the 60’s when significant amounts of labor involved in manual calculations were automated away by mainframe computers.  The early 90’s did see a measurable bump from what we consider modern day computing, but that has been the last true and comparatively small advancement in 40 years.  In fact, as popularized by a recent controversial book by Thomas Picketty, “Capital in the 21st Century” (here), income inequality, has been rising since the early 70’s.  The standard of living is not going up for current generations, it’s going down and has been for some time.

His paper provided this visualization of the growth in GDP / capital or otherwise known as standard of living, improvement in the last 700+ years. 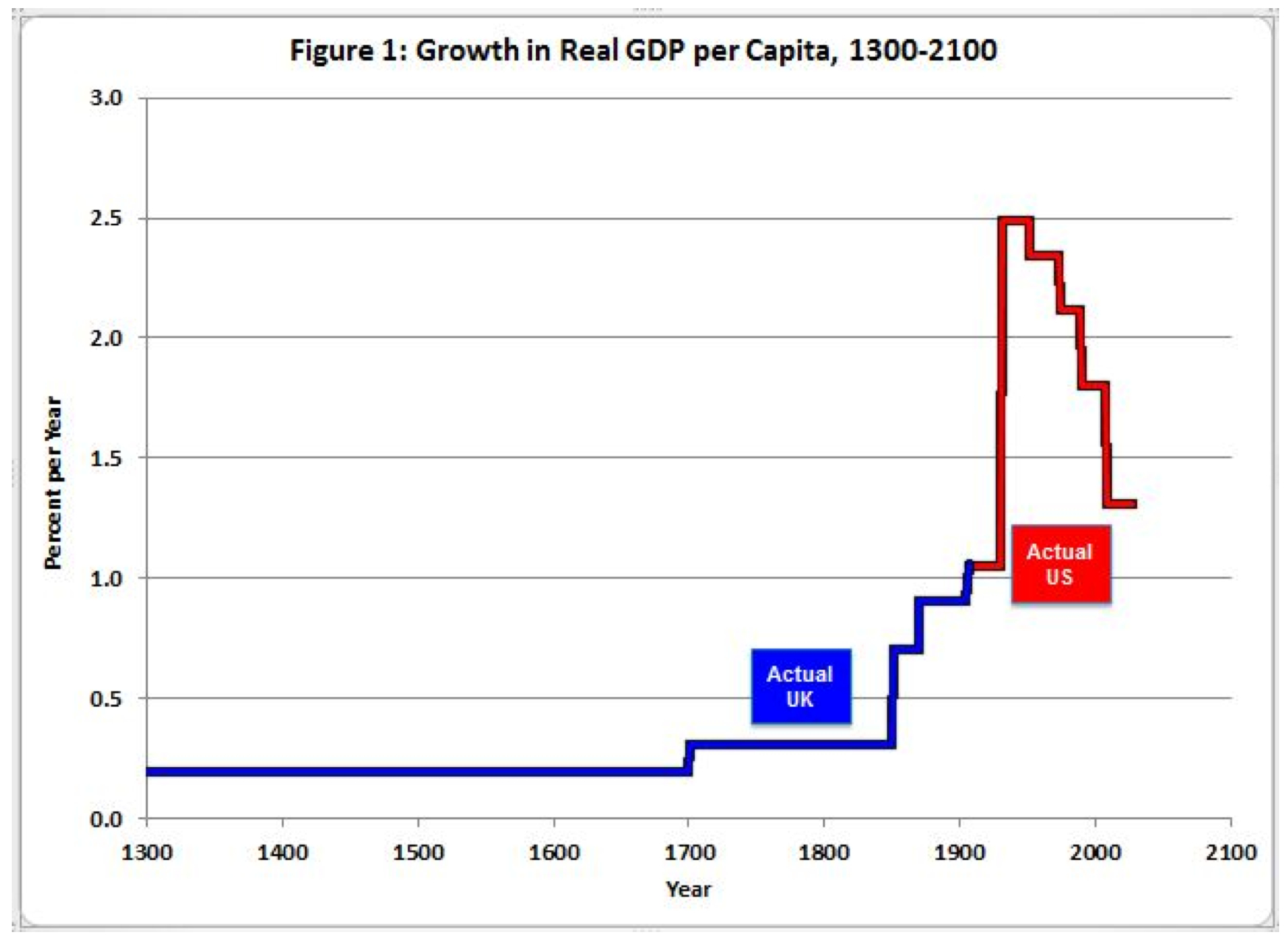 What does it mean to a Manufacturer?

We discussed this in a recent microforum at #sapphirenow on the future of work in manufacturing.  The broader picture is that our SAP customers are under significant and increasing pressure to innovate in their business to manage a rapidly changing society and economy.  This slowing of standard of living, coupled with increased income inequality is having a profound impact on the manufacturers relationship with people both as employees as well as consumers.  Fortunately, the things they can do positively to combat this in the future are initiatives they may already be working on today.  They merely take on more justification and greater sense of urgency in the future:

1.    Your future work force will be made up of more flexible labor –  Increasing income inequality and lower overall productivity puts downward income pressure resulting in less labor stability.  Your future labor pool will not have 10 years experience on your shop floor.  They will show up and your processes need to make them effective and manage them from day 1.  Many things you are doing now compliment this:

2.    Your customers are not going to consume more increasingly expensive products – There are limits to overall consumption patterns.  The overall economy does matter to individual businesses.  Manufacturers have already had to face this shift of product mix and feature/function limits the market will bear and in which geographies and market segments the demand will be present.  This is driving more responsive innovation processes.  Current initiatives and trends in many companies will continue to improve competitiveness in this toughening economic climate:

I will leave you with Merle Haggard’s, “Are the Good Times Really Over for Good”.  He laments the challenges of the worker and changes to urban life.  Among these changes, the first line of the song is, “I wish a buck was still silver, it was back when the country was strong”.  Maybe he was lamenting the production of the last silver dollar currency with Franklin D Roosevelt’s Executive Order 6102, which criminalized the possession of gold requiring citizens to turn it over to the government at $20.67/ounce in April 1933.  By August of the same year, the order was repealed and the price of gold now solely held but the US government was set at at a fixed price of $35/ounce.  However,  the impact of four currency wars on manufacturing and even today’s currency driven military conflict over precious metals between China and Japan will have to wait for different posting…..for now enjoy one of our true national troubadours…..