The most notable end user focused enhancement, that the SAP marketing machine gave an early preview to at the BI2014 conference keynote by Steve Lucas, is the new infographic visualisation style storyboard. 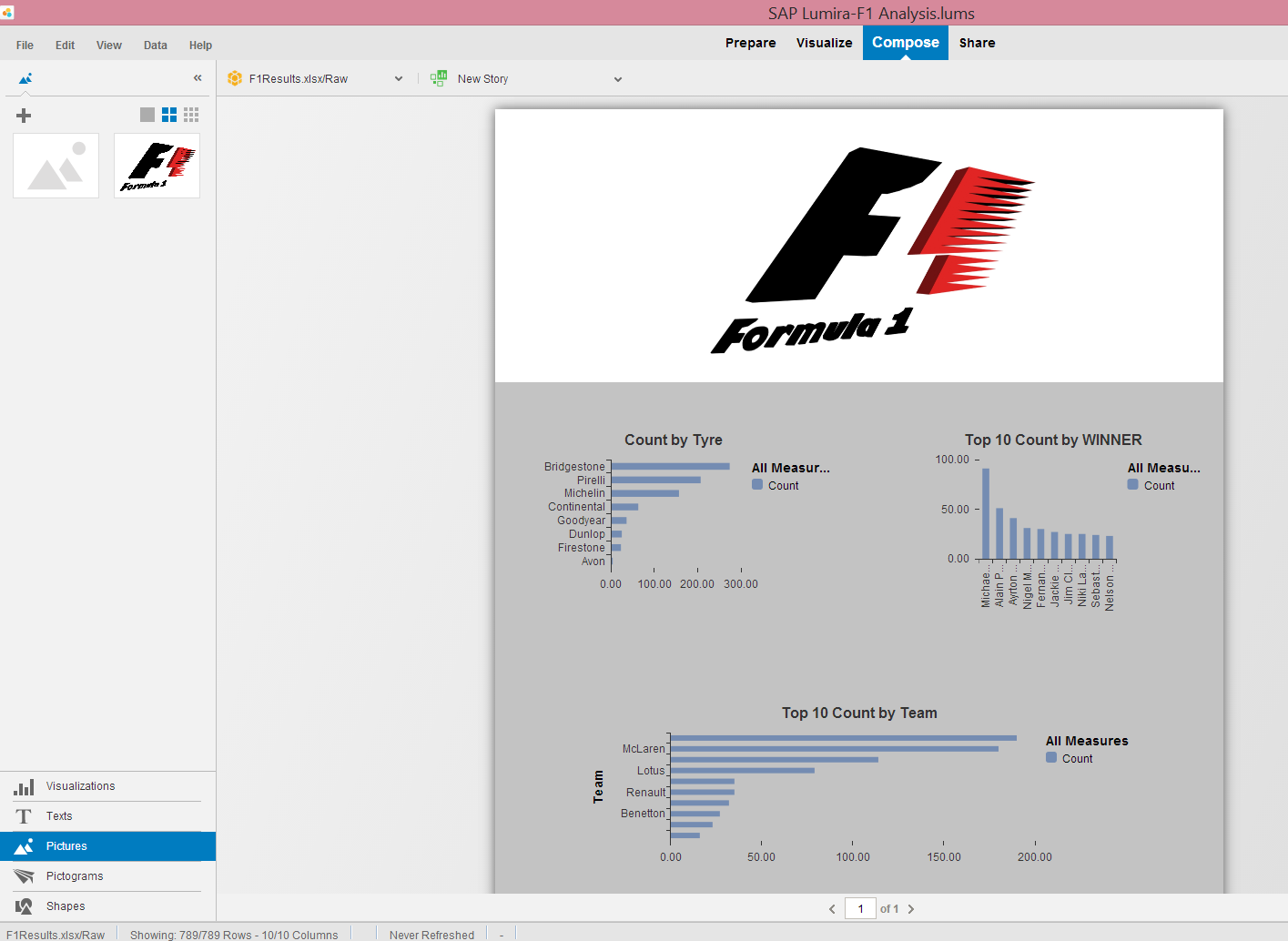 1.It should be named “Free Format” template

The single best improvement with the infographic storyboard is the ability to layout components in a free format style, no more constraints of a lego block grid. This new functionality really reminds me of Microsoft PowerPoint allowing easy formatting and layering.

2. It’s only a clip art library

If I’m brutally honest the infographic elements are limited as they simply rely on a library of SAP silhouette images that can be inserted on the story board.  You can also add your own images in various formats which is nice.

3. Beware there is not functional parity

Sadly there appears not to be functional parity between the new infographic storyboard and the existing style of storyboards.  For example you can’t add a “control” in the form of a selector to filter the infographic data presented by country, product etc.

The infographic storyboard template is a flat visual presentation that tells a story in line with the current world view of what an infographic is (Wikipedia). But, the second thing I did after inserting one of the clip art images and a chart was to hunt for a selector box to filter the data. 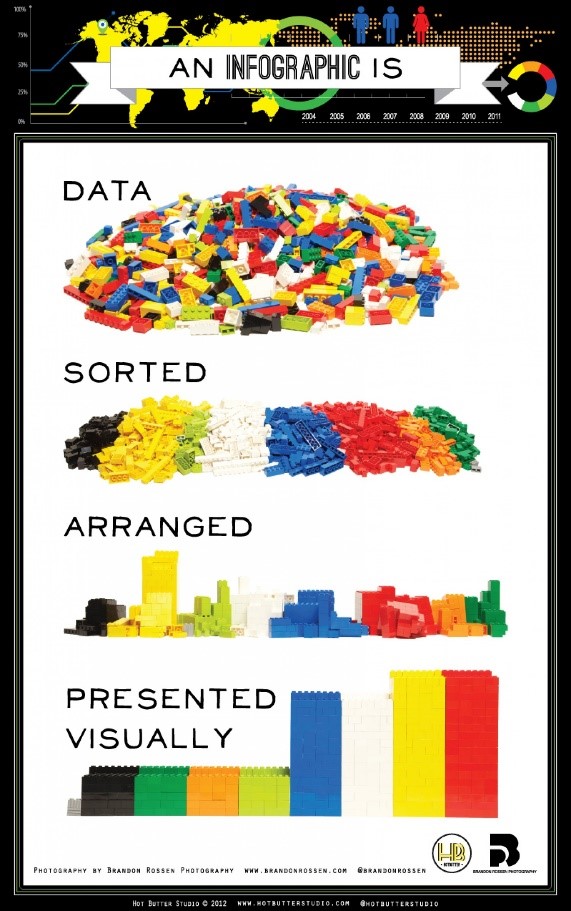 To me the second most notable enhancement is the ability to share Lumira stories to the BI4 platform.  A fantastic step in the right direction but sadly there are a few of complications.  My understanding may be out of date as this was validated @ release 1-16 (better known as the release that didn’t happen!)

1. Integration with the BI4 platform is delivered in two parts, an add-on to the BI4 Platform (yep more platform services) and the requirement for a side-car Lumira Server.  Lumira Server is a HANA XS application which will need appropriate licensing and hardware. There will be a HANA runtime license available for Lumira Server that is restricted for that use only but speak to your SAP account manager for more information on pricing and restrictions.

2. I haven’t fully got my head around how to implement governance, life cycle management and data security in this model.  It feels like its dependent on the data source as the security can sit either in BI4, in HANA or a hybrid of the two.

3. There are a number of BI4 platform based workflows that are not available to storyboards in the version 1-17 release for example, Universe support for Storyboards and Scheduling & distributing storyboards. I understand that SAP do have these planned for a future release so hopefully you should get the same level of control of storyboards as you get with Web Intelligence or Crystal Reports.

A few new features of note: 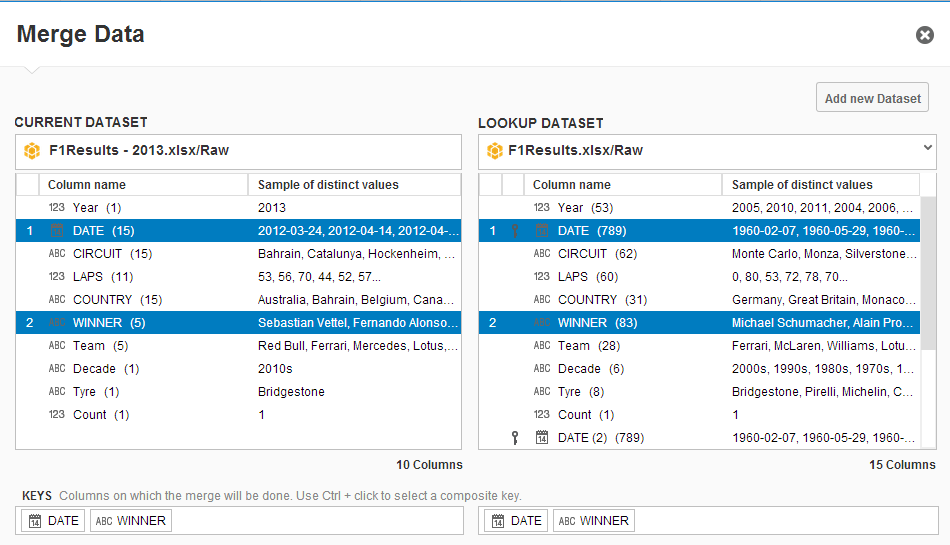 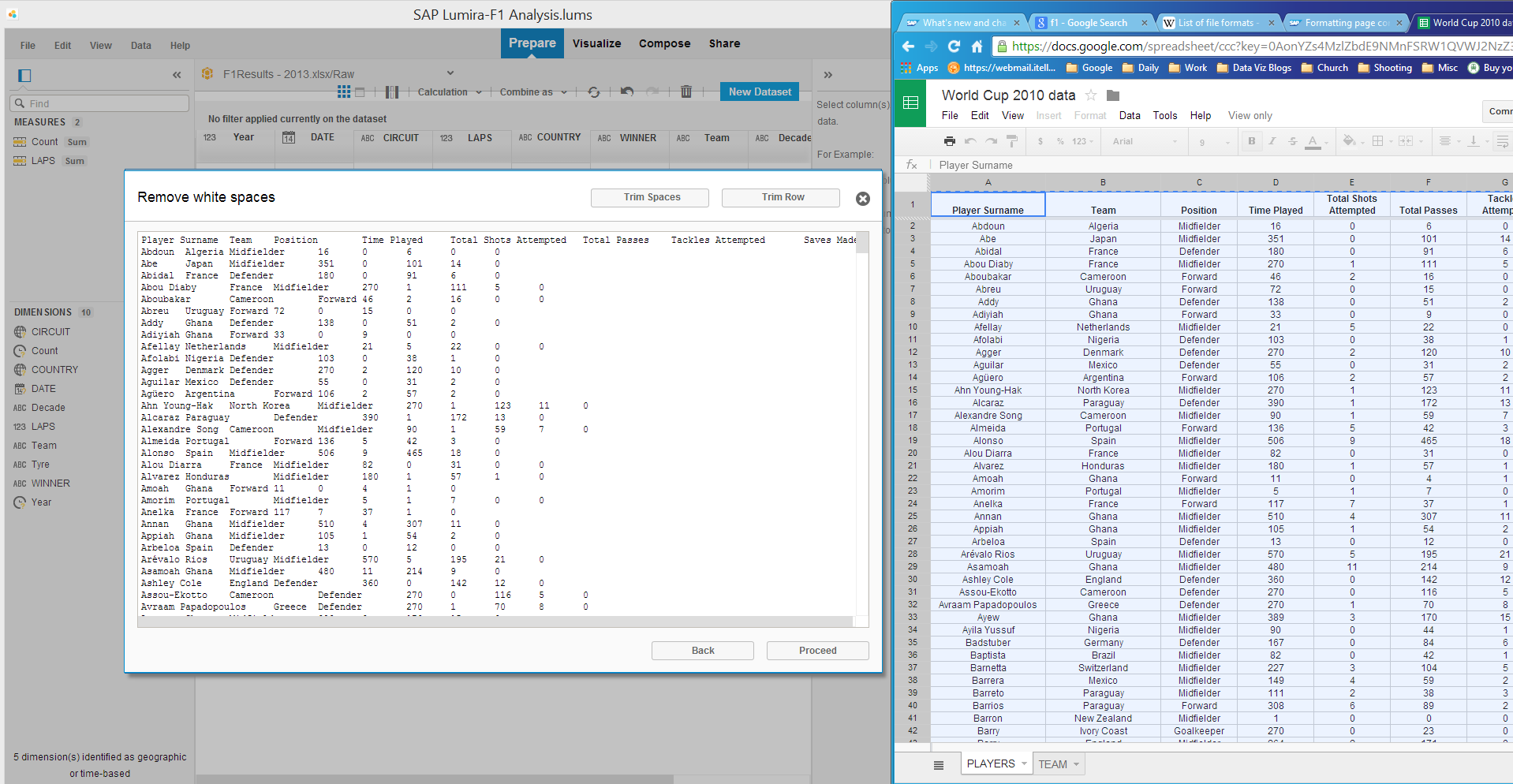 Sadly I have been unable to test BW connectivity as It looks like the dropbox to select a server can only load a certain number of systems from the saplogon.ini file.  As I work for a system integrator the number of systems I have is huge and my demo systems are too far down the list. 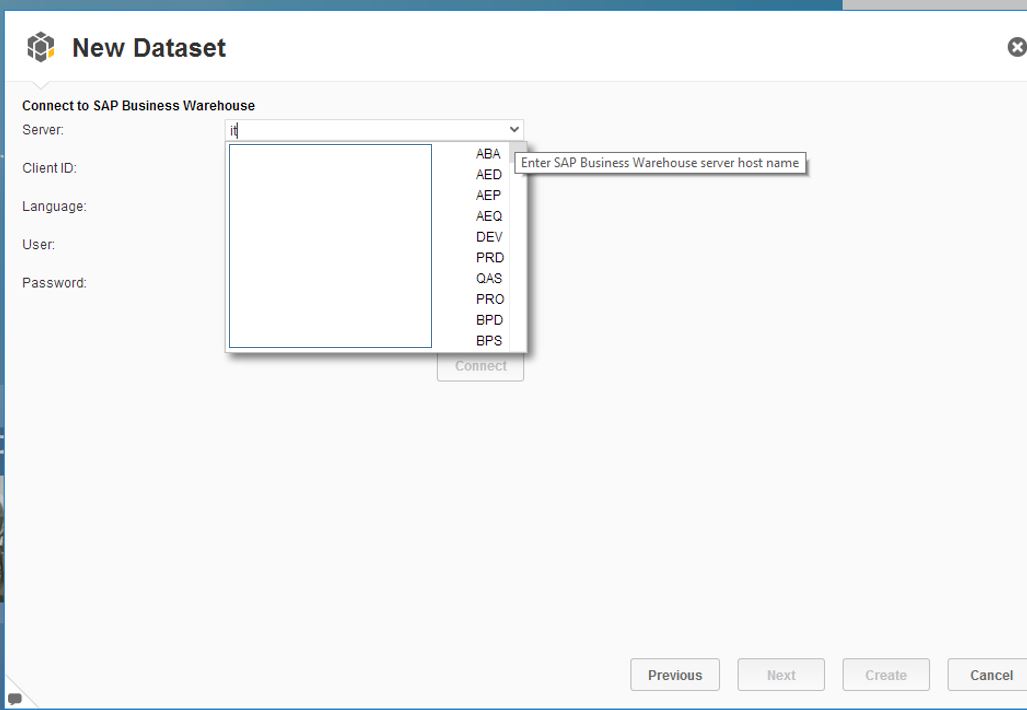 Lumira – Is it a suite or a Family?

My final observation is that SAP Lumira is building out to a family of interfaces on top of a core technology stack, Desktop, Cloud, Mobile and Server.

I hesitate in calling Lumira a “Suite” as this can have many connotations and inferences. A suite suggests lots of different things joined together, whereas I think you could draw a parallel between Lumira with Web Intelligence.

How I hear you ask …

SAP Lumira is moving forward at a rapid pace, think how it has changed from a free desktop application 18 months ago to now a family of technologies. Now project that level of enhancement and innovation out a further 18 months. What will the future look like? I have my own gut feeling, but what are yours?

And one more thing ……

For the first time recently I saw this slide in a presentation from SAP. 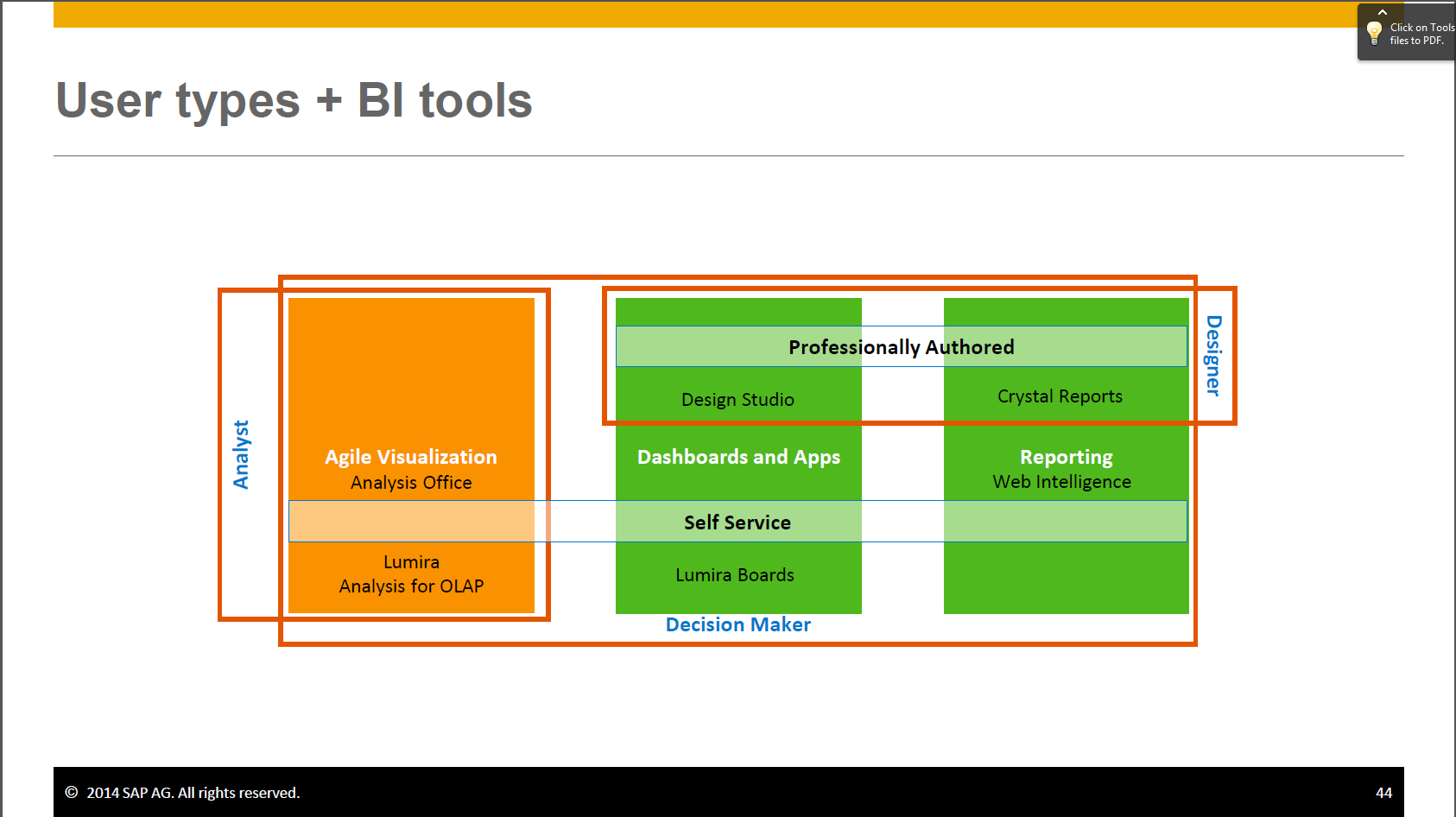 What do you draw from it?

I blogged around the question of  where will end user create their own dashboard style visualisations in the future (what-is-the-future-for-dashboards-created-by-the-mythical-business-user) and suggested we should expect more from SAP Lumira in this space.  You could be forgiven if you jumped to the same conclusion that I did that Lumira will be built out to fill this gap as the screenshot above could be interpreted that this is the strategy going forward.

With Ref. to “Import
Data from SAP BW Online….I have been unable to test BW connectivity”

Would it be possible to try again,
as the Filter Search should work as should the horizontal scroll bar.

Many thanks & Best Regards,

Yep I have a scroll bar but it looks like the list is limited to 100 systems.  Fine in most organisations but as a Systems Integrator we have many many hundreds.

I have raised an internal ticket with regards to your issue.

Seems that Scroll bar list is limited/bound to ≤100 systems.

I will get back to you when updated.

Many Thanks & all the best,

The issue you encountered (scroll bar… limited to 100 systems) should be resolved Lumira V 1.18.

They have raised the upper bound.

Many thanks for letting me know.

What I find interesting is that the new features documentation that I've seen for SAP Lumira 1.17 doesn't have what I consider a huge addition to functionality. Specifically, the ability to create custom hierarchies. This is huge!!! Now my customers are able to create visualizations where they can drill down a hierarchy that's meaningful to their business (e.g. customer or material segmentation).

Fair point Dennis,  the new feature around custom hierarchies appears not to be included in the "What's New" documentation and I only just saw it in the following video:

Thank you Dennis for the feedback. The product team is updating the "What's New" documentation to highlight Custom Hierarchies. A new version is planned soon.

Presentation version of SAP Lumira 1.17 overview has been sent to publication. We expect it to appear on SCN in the next couple of days. You are so very right that custom hierarchy is a very popular feature.  (Secret: Dev team managed to fit it in very late 😉 and it was missed in the documentation. Don't tell anyone though)

Great blog, thanks for sharing your insights!