Why “inclusion” is the secret sauce of recipes for diversity

We may think that opposites attract, but study after study shows otherwise: people around the world prefer to associate with others like themselves. It’s called the “affinity effect” and it holds even in the dating scene – an analysis of 1 million eHarmony matches shows that while people may say they’re looking for “complimentary” partners, they really want someone just like themselves. (It also shows that there’s no end to the uses of data analysis.) What’s more, when we’re surrounded by lots of different kinds of people, we apparently seek out “our” people even more. Which may explain why, when I was in Amsterdam, I took my life in my hands to sprint across three lanes of traffic when I saw a guy wearing a Giants cap. In San Francisco I never would have noticed him and his wife, but in that city filled with crazed bicyclists fueled by bitterballen, coming from the same place and rooting for the same team made us instant friends.

The affinity effect may sound like bad news for organizations trying to reap the benefits of workforce diversity, but maybe that’s true only when if diversity is defined in instantly visible “traditional” categories such as race, age, and gender. In reality, each of us is a combination of many different characteristics that include personality, whether we’re parents, sexual orientation, religion, language, and so on – and that’s just from a North American perspective. Depending on our surroundings, we’ll be drawn to people with whom we share one or more of the characteristics that makes each of us unique. Designers are likely to have at least a passing interest in others who have an opinion on Helvetica. Anyone living in a foreign country for an extended period will seek out those who speak their language. And parents across any diversity spectrum will share similar hopes and fears for their children.

In his TED talk Upside-down Diversity, Andres Tapia explores diversity in the context of multi-dimensional identities and focuses on “inclusion” as the magic ingredient that makes the mix of diversity work. Here’s an image from his presentation showing the many possible layers and combinations of diversity. 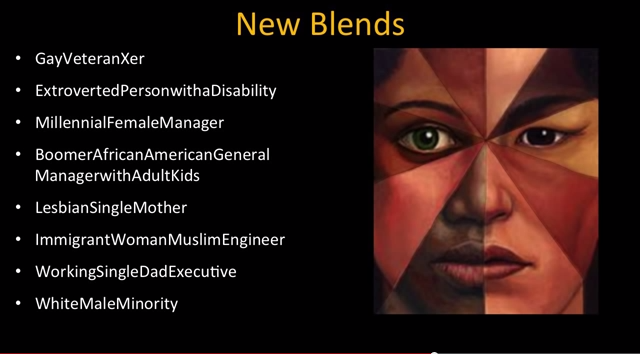 So what’s a company that wants to benefit from diversity to do? As in almost any other area, managers play a critical role when it comes to fostering the inclusion necessary to make diversity work. in the background, these efforts are probably reinforced by the so-called “mere exposure effect,” which says we prefer things we’ve experienced before, whether we know it or not. It doesn’t matter whether those things are pictures or lyrics or melodies; people like them more the second or third time around. In addition to explaining why so many of us like oysters, this effect kicks in when we’re repeatedly exposed to “different” people at work, which of course also gives us the opportunity to discover what we have in common despite our differences.

Although the basic challenges of workplace diversity are based on human nature and hold across cultures, just what makes up “diversity” and the motivations to achieve it vary widely around the world. To explore these differences, you’re invited to join a webinar with Gilda Stahl of the Economist magazine on July 9, at 10 a.m. PT. Gilda will share the findings of a survey and in-depth interviews (conducted by The Economist Intelligence Unit on behalf of SuccessFactors) with global executives and experts on important demographic groups such as millennials and women. Find out more about why diversity can be so hard, how diversity challenges differ by region, and the strategies global companies are using to achieve it.