Loading of data in Historical rates in SAP BPC NW 10:

Loading of data in Historical rates in SAP BPC NW 10:

In Consolidation, for some accounts like Investments, Equity etc. it may be required to load the data at historical rates

It is possible to maintain (HIST) historical rates in Exchange Rate tables in BPC NW 10 and system to convert the LC into GC at historical rates. However, if there are large of number of accounts with different historical rate for different accounts, this option becomes not only cumbersome but also error prone.

In order to overcome this, SAP has suggested the following option as detailed below:

1.Calculate the historical value of each equity account and the corresponding cumulated conversion reserve; calculate also the conversion difference on investments by entity (owner) and Interco (held company);

• Currency: Consolidation currency against which the converted value is calculated

The automatic adjustment rules will post the NCI on conversion reserves and the CTA on investments from the imported data.

5. Populate the converted opening data of the first required consolidation by triggering the CopyOpening Data Management Package with the consolidation currency defined as parameter.

This is the preferred option because it allows you to book the historical equity value and conversion reserves in accordance with the set of Audit IDs used for the currency translation adjustments in subsequent consolidation of the following periods. (SAP BPC IFRS Kit)

This is explained along with the settings in BPC:

Maintain the rate type as HIST for those accounts for which historical rates have to be maintained:

For the opening flow, maintain the formula as AS_IS:

For the CTA account, maintain the rate type as CTA

For the rate type CTA, the formula for the source flow should be maintained as AS_IS:

For the Group members, maintain Y for property STORE_GROUP_CURR as shown below: 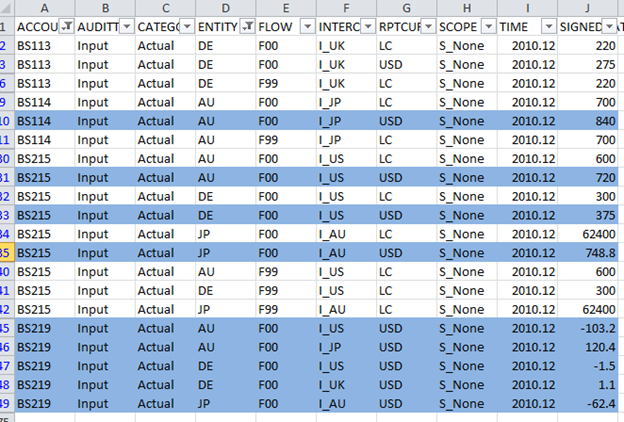 Balance is carry forward to the next period  with Historical rate as can be seen from the following screen shot:

Hi, great post, it was mentioned that "SAP has suggested the following option".. where can I get this source? thanks and BR

You can find the same in the following document:

Great I'll take a look thanks!