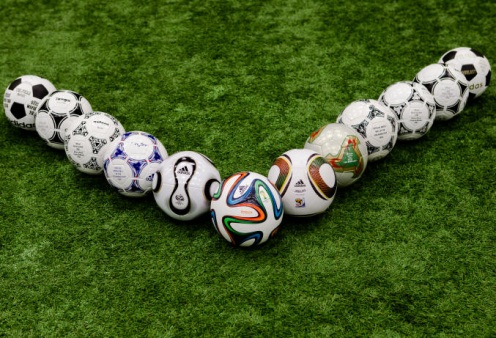 When Brazil and Croatia kick off the first game of the 2014 World Cup they will use the Adidas ‘Brazuca’, the official ball of the World Cup 2014. The name Brazuca comes from a fan poll in Brazil that drew almost a million votes, and is an informal local term that represents the Brazilian way of life. This is the 12th time Adidas has designed the ball for the world’s largest global tournament. How do they do it?

The actual ball used in the tournament was always going to be under heavy scrutiny after the much criticized design flaws of the Jabulani ball in South Africa 2010, which moved, swerved and dipped unnaturally, much to the dismay of goalkeepers around the world. It was described as a “beach ball” that made players “look like drunken sailors” by leading players.

Thankfully, the Brazuca has been in design and testing for over two years. Teams like Bayern Munich and  AC  and top players such as Argentina’s Lionel Messi  and Germanys Bastian Schweinsteiger were involved in the development of the ball, which must make it the most tested ball of all time. Some of the key design elements of the new Brazuca ball include:

Before its kick off on June 12, the Brazuca ball will have made quite a journey to the Arena de Sao Paulo in Brazil. For the Bazuca was actually manufactured in Pakistan, which is known for its cricket team, rather than its 164th ranked soccer team.

When Adidas needed extra manufacturing help – due to a Chinese supplier’s lack of capacity to produce the optimal amount of stock – they had to find an alternate supply source.  A Pakistani ball manufacturing company, who has made balls for the German Bundesliga, French league and the Champions League, stepped in and won the contract. This highlights the fancy footwork needed to run hard in today’s global supply chains and the importance of having risk mitigation strategies in place to manage the uncertainty they bring.

For the rest of the summer you will be seeing players of all shapes, sizes and skill levels trying to “bend it like Beckham” (or in this competition , Ronaldo) on parks and fields everywhere. It is estimated that over 42 million soccer balls have been distributed all over the world ahead of the FIFA Football World Cup 2014. These balls have been shipped to literally every country in the globe. From the manufacturing facilities at the 164th ranked country in the FIFA rankings to the number 1 ranked (Spain) through the 207th ranked Turks and Caicos Islands.

So when the tournament starts Arena Corinthians in Sao Paulo, let’s hope they all fly true and fair.

To learn how one soccer club uses cutting edge analytics to train for the World Cup, check out the story “Data Innovators in Sports and Entertainment: TSG Hoffenheim 1899.”

Nice story about the most important ball these days! For more background on the World Cup and FIFA, watch this hilarious (and serious) "Last Week Tonight" episode (13 min.) with John Oliver: FIFA and the World Cup.