The City of Medellin, in Colombia, recently received the most innovative city of the year award, what a transformation for a city that in the past faced many challenges of a different kind. So it was very fitting, that UN Habitat, under the auspices of the World Urban Campaign , chose to host the 2014 World Urban Forum in Medellin during the month of April. I think Medellin in many respects reflects the global urban challenges that our cities and urban settlements face and at the same time demonstrate the amazing potential of cities to adapt, transform, innovate and perform, no matter where you, what challenges you face or where you start from.

I was lucky enough to be involved in many sessions, workshops and discussions, one of the highlights for me was the private sector panel discussion on Accelerating Change On The Urban Agenda & Private Sector’s Urban Role. The discussion was very well framed, and very well attended, with many thought provoking issues discussed. Most companies are based in one or more major cities, most of their employees, partners and customers also live, work and visit the same major cities, the synergy between public, private and citizen’s is obvious.

If now over 50% of the population lives there and in a couple of decades as many as 75% then it is clear that the success of our cities, their economies and the lives of citizen’s are all inextricably linked, the better all actors can collaborate on an agreed agenda, the better the chances are for a better world.

The panel discussion was very broad with many companies reflecting upon their approach to cities, being the last one to make opening remarks I wanted to avoid repeating many of the topics already covered by the distinguished speakers. Instead I explained SAP’s urban journey and how we have reshaped, re-orientated and reset our approach to cities and urban settlements through the SAP Urban Matters programme.

Interestingly our urban journey began in the early 1990’s with the City of Edmonton being one of our first city customers, today we support approaching 2000 urban governments in many countries, and have amassed expertise from many thousands of projects with those customers. Yet during the last 5 years we experienced a change, focus and shifting priorities in cities, like no other time in our history. For sure the ‘Smart Cities’ movement played a key role in this, as has governments increasing recognition of cities’ in global economies, then there is citizen power which has been levering technology to have a louder and more engaged voice in their cities’.

At this point in our history we are witnessing a convergence of drivers that led to this century being the urban century, when humanity has reached an inflection point, full of hope, contradictions, amazing factors and a appetite for change, innovation and speed. Just take a look at some of the facts and contradictions;

However knowing there is a problem and understanding the underlying issues do not in themselves provide for a remedy or solution, it is often said that necessity is the mother of all invention and I think in today’s urbanised world there is plenty of necessity and room for much invention and innovation. Our CEO, Bill McDermott (http://www.forbes.com/sites/sap/2014/06/04/sap-ceo-bill-mcdermott-we-cant-let-complexity-win/) has set our company, SAP, on a bold course to reduce complexity, simplify everything we do and focus upon our customers.

The SAP Urban Matters’ programme aims to do exactly that for SAP’s city and urban customers, our customers wanted SAP to think differently about the urban agenda and address a broader range of urban challenges, rather than adopt a solution first approach. From the outset we made ‘SAP Urban Matters’ all about the citizen, our customers and urban value. We set out an approach that defined strategy & vision that addressed the big urban issues and interlocked with SAP’s corporate goals. Our focus was not solely upon cities but regional, local and city settlements, as we felt this better reflected the urban complexity and diversity of responsibilities by country and city.

Whilst we recognized cities were complex, diverse and were at different levels of maturity and had different needs, we also recognized that the innovation agenda in cities and municipalities is ferocious all over the world, take the Municipality of Pune, India who wanted to create better living spaces in the city, to achieve this fast they used mobility technology to empower their officials to map out all their trees across the city or the City of Boston, who were able to reduce crime in problem property areas by 55% use real time analytics or the City of Melbourne were able to improve environmental compliance or the megacity of Mumbai who were able to improve citizen services and disaster resilience.

Surely the urban world is becoming ever flatter, with cities acting as nodes in a huge economic, social, political and environmental network, the urban world wide web means each day we become ever more interconnected, interdependent and reliant upon each other for a better urban future.

SAP Urban Matters, enabled SAP to simplify our approach to cities and urban settlements, by placing citizen’s and our city customers at the heart of everything we do.  The top three themes for many of our customers were quality of life, good government and jobs. So we made our overarching strategy for cities to be just that, which meant we also were able to link this to SAP’s corporate goals which were to improve people’s lives and help the world run better. 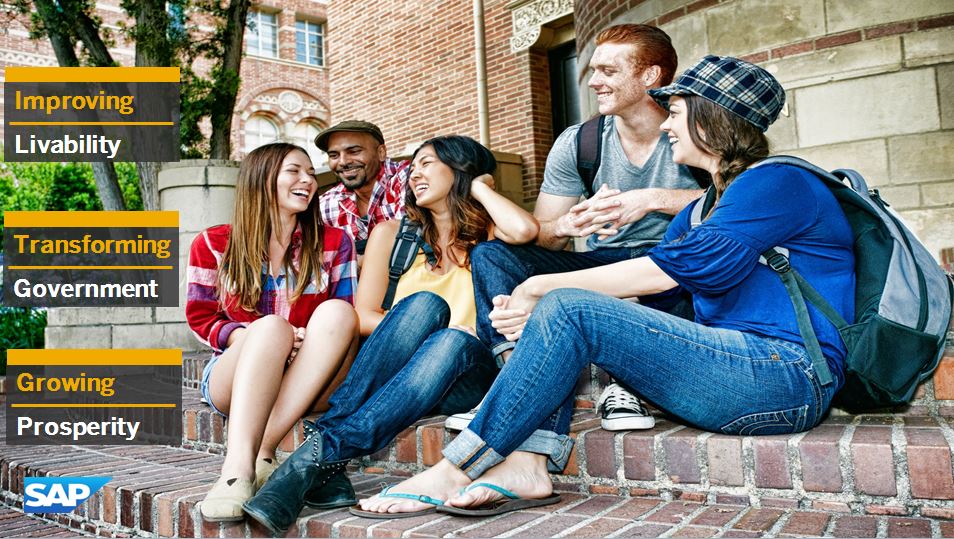 The strategy led to an urban taxonomy, so analyzing what cities actually do and have responsibilities for. This approach allowed SAP to connect these roles, business areas and responsibilities back to the strategic goals. Whilst we knew cities and our customers pretty well, we had never formalized this business analyzing within the new urban context. This approach also provided a basis for establishing a basis for benchmarking, measuring value.

SAP has for many years focused around value benchmarking, better connecting the technology and solutions to the measurable outcomes for an organization, for example using technology to cut crime, reduce fraud, improve tax collection, improve citizen satisfaction, improve cycle time by X.

For Urban Matters it was a much broader exercise, asking those questions at a much more strategic level, across a broader range of areas. The good news is that these measures are mostmy in the public domain and are widely accepted.  Our approach was to do the analysis and make the connections, goals – business areas, – measures – solutions – references back into SAP Urban Matters.

Once we had been able to connect the various urban pieces together, we adopted a cross industry focus and asked the question, what are the areas of value we can address across the city today ? From this approach we defined 36 areas where SAP can help cities to improve, transform and prosper. We represented these areas of value in a value map which is available online today. This holistic approach means we simplify SAP’s approach to cities and urban settlements, we represent the complexity of cities yet break down this complexity into smaller addressable pieces, so we can address more city issues at a much more granular level yet supporting and overall roadmap. For example in Public Safety & Security we can improve fire & rescue services, a good example would be New South Wales Fire & Rescue, we can help improve disaster resilience and response, as good example here is Direct Relief International or we can improve cross agency collaboration on safety issues, the Village of Schaumburg is a good example here.

The SAP Urban Matters Programme is changing the way SAP addresses city and urban challenges, the journey has just begun but it is one way we are helping an urbanizing world to run better and improve people’s lives. The approach spans helping businesses of all sizes to grow in cities in all continents, for example in Colombia, Ghana & India.

The programme helps cities to transform the way it is organized, delivers services and engages citizen’s in many cities all over the world, from Cape Town  to Buenos Aires, from Boston to Bhopal (Urban Matters event in June 2014) From Adelaide to Puebla, from Singapore to Rio, from Melbourne to Montreal.   No matter what, urban matters to SAP, our employees, our partners and most importantly our customers and the citizen’s they serve.

The private sector is a critical actor in solving the urban challenges this century, each company has their own strategy for this. SAP Urban Matters is our story, our journey, our way of helping cities and urban settlements to improve livability, transform governments and grow economic prosperity.

SAP Urban Matters is also enabling SAP to think about new models for success with cities, new ways to consume software in the cloud, to address real time needs and think big about value, outcomes and performance. 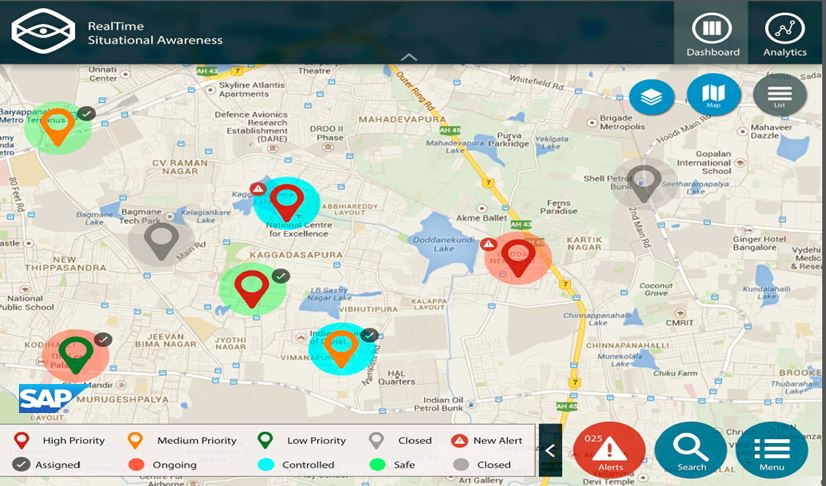 In coming months I will start to focus at a more granular level on the key parts of the SAP Urban Matters strategy.

Great summary of the SAP Urban Matters Program by Sean  O’Brien, the Global Vice President for Urban Matters and Public Security, with responsibility ’s global strategy, solutions portfolio, eco-system and go to market activities for smart cities with in SAP.