Supervisory Board, Referee and Fans: More Parallels between Soccer and Business 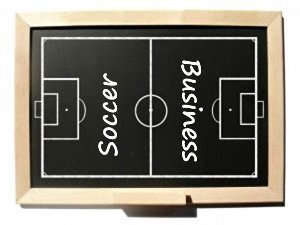 With just a few days to go before the soccer World Cup I wanted to share my thoughts about what happens off the soccer field and compare that to the corporate arena. This is a follow up to my previous blog post Run Your Company like a World Class Soccer Team in which I had outlined parallels between the positions in a soccer team and the organizational setup of companies. Applying the approach of “core and context”, the players and the soccer matches represent the core whereas the activity and stakeholders around the game are the context. The same applies for a company and the ecosystem and context in which it operates.

Supervisory Board and Team Coach

The role of the Supervisory Board or Board of non-executive directors can be compared to that of a soccer team’s coach and his coaching staff. Both supervise and steer the activities, however, they cannot directly influence the success of their teams since the Board has no executive role and the coach cannot enter the field and score goals. They have regular forums (quarterly board meetings, half-time break) to communicate their strategy and in critical situations they will intervene by requesting their CEO to the board room or the team captain to the side line.

One major difference can be seen in the number of positions that one person can hold concurrently. While it is common in the corporate world that one person runs a company as an executive and at the same time sits on the supervisory board of several other companies, it is hard to imagine for a soccer player to play for one team and at the same time coach one or even several other teams. From a corporate governance perspective, it seems that some companies could learn from soccer in this respect when forming their supervisory boards.

Each game has its own rules and both in business and sports a set of common rules is necessary and needs to be enforced if not followed properly. Some fundamental rules such as basic accounting principles or the offside rule have long been in place with only minor changes but new developments and specific events in business and soccer have also triggered the creation of new rules. For example, the fraud cases at Enron and WorldCom led to the Sarbanes-Oxley Act (SOX) of 2002 and the back-pass rule was introduced to soccer in 1992 mainly as a result of time-wasting by teams during the world cup 1990.

Referees ensure that soccer rules are followed correctly and in business several regulatory agencies such as the U.S. Securities and Exchange Commission (SEC ) enforce laws and regulations.

Management guru Peter Drucker emphasized the essential role of customers for a business by stating: “The Purpose of a Business is to create a customer”.  Similarly, the purpose of a soccer team is linked to their fans who in many cases assume the role of customers when buying tickets and merchandise. A strong and loyal fan base that passionately supports their team is the role model for what companies want to establish among their customer base. Many articles have been written about the question “How to turn customers into fans?” since the loyalty, support and passion of fans for their teams is exactly what companies want to achieve with their customers. The latest developments in social media have also blurred the lines in terminology as many customers and prospects have registered as fans or followers of the companies whose products and services they are interested in.

And now, let the games begin!

As you get ready for the World Cup and while watching the games, do you see any other parallels or similarities between business and soccer? On or off the field? Feel free to share and comment…

Tim leads the Global Management Office of SAP’s Business Transformation Services (BTS) organization. He joined SAP in the year 2000 and has been working for BTS since 2009. As a consultant he supported customers globally in Europe, Asia and America to succeed with their Business and IT transformation. Tim holds diploma and master degrees in Business Information Technology, is a certified Business Transformation Master and teaches as visiting lecturer. He can be reached via https://www.linkedin.com/in/timteinzer and followed on Twitter via @timteinzer.