I had the very good fortune to mix in a few sessions with my SAPPHIRE NOW 2014 duty running and coordinating the SAP Services Launch Pads at the event this year.  I stopped by the booth of a long-time partner of SAP, Bramasol Inc. and met with their head of Sales, John Froelich  who I had worked with years back at SAP.  He mentioned that the San Jose Sharks were going to be giving a presentation on the third day of SAPPHIRE NOW – awesome! 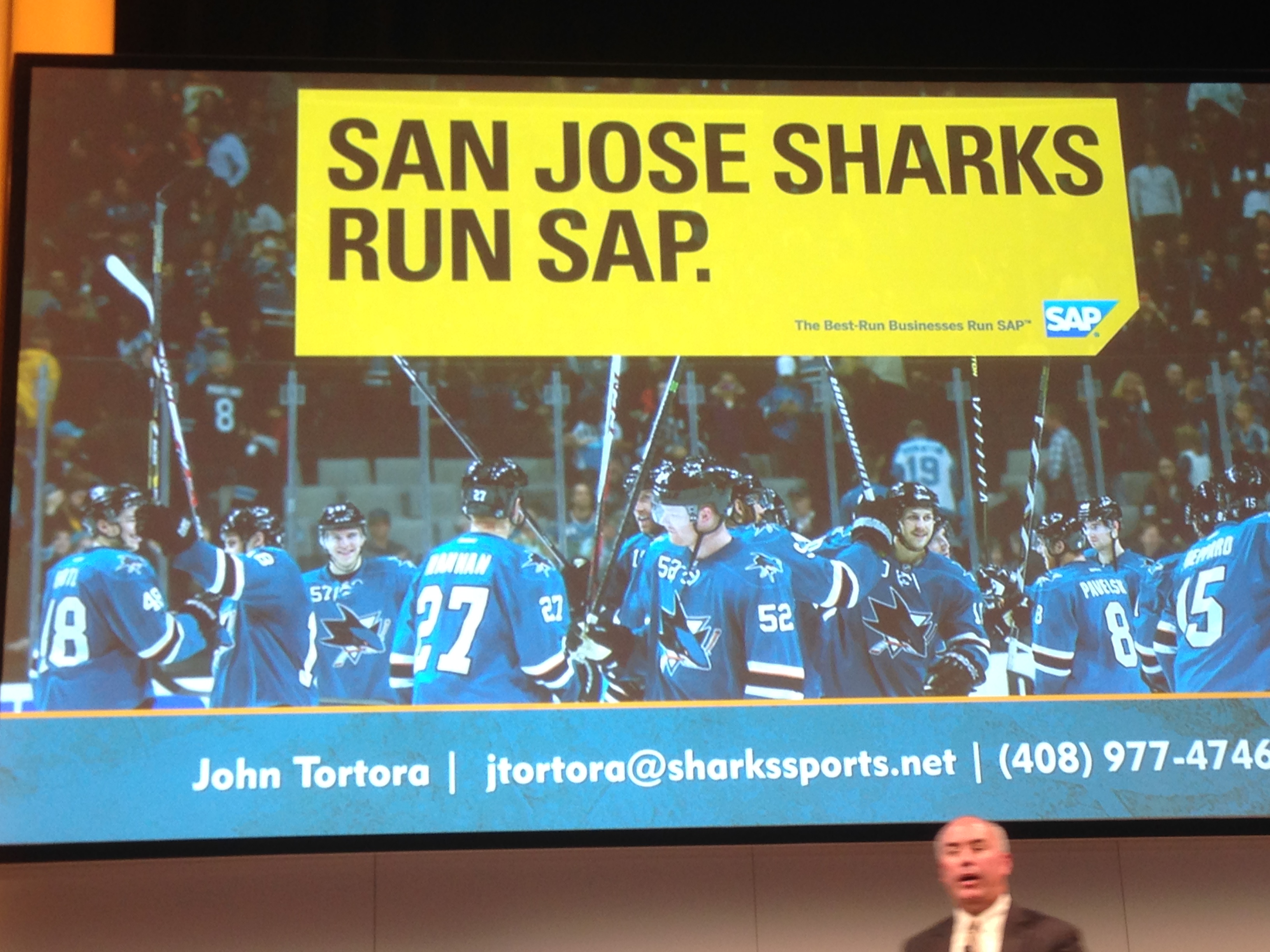 Bramasol is a great SAP Partner and one of their claims to  fame is being the first SAP Channel Partner in North America and an early pioneer for SAP solutions in SME/Mid-market companies.  I first worked with Bramasol in the launch of SME and SAP All-in-One solutions in the early 2000’s – which seems like forever ago!  The second claim to fame is for having done the implementation of SAP Business By Design for the San Jose Sharks organization.  Anytime I can combine SAP and Ice Hockey and the NHL, I am in!

I made my way down to the Forums area of SAPPHIRE NOW 2014 — the session was given by the COO of the San Jose Sharks organization John Tortora.  John is from a legal background and worked for the NHL prior to joining the Sharks.  His organization is a typical SME sized company and the ownership group includes Hasso Plattner — the amazing original co-founder of SAP who’s still active with SAP, as witnessed by his amazing keynote at the event.  I’ve been in high tech for more than a quarter century and I’ve seen few with the energy and thought leadership Hasso showcases. 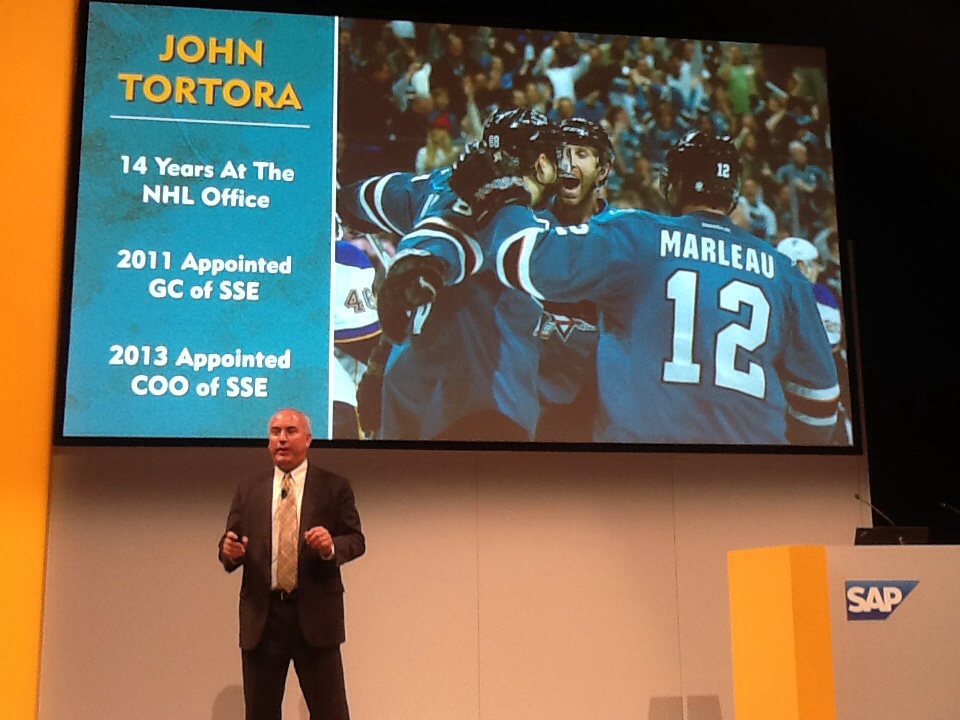 John started off with a cool video — with SAP now having the naming rights for the SAP Center (purchased from HP) there was no shortage of SAP branding and I have to say I was incredibly proud to see the cool association of SAP and an elite team in the NHL.  The franchise consists of multiple entities — living in the Boston MA area we are long-time fans of the Worcester Sharks, one of several components of the very successful San Jose Sharks organization.  SAP logos have proiminant visibility at the SAP Center and this year’s NHL playoff coverage had no shortage of SAP branding. 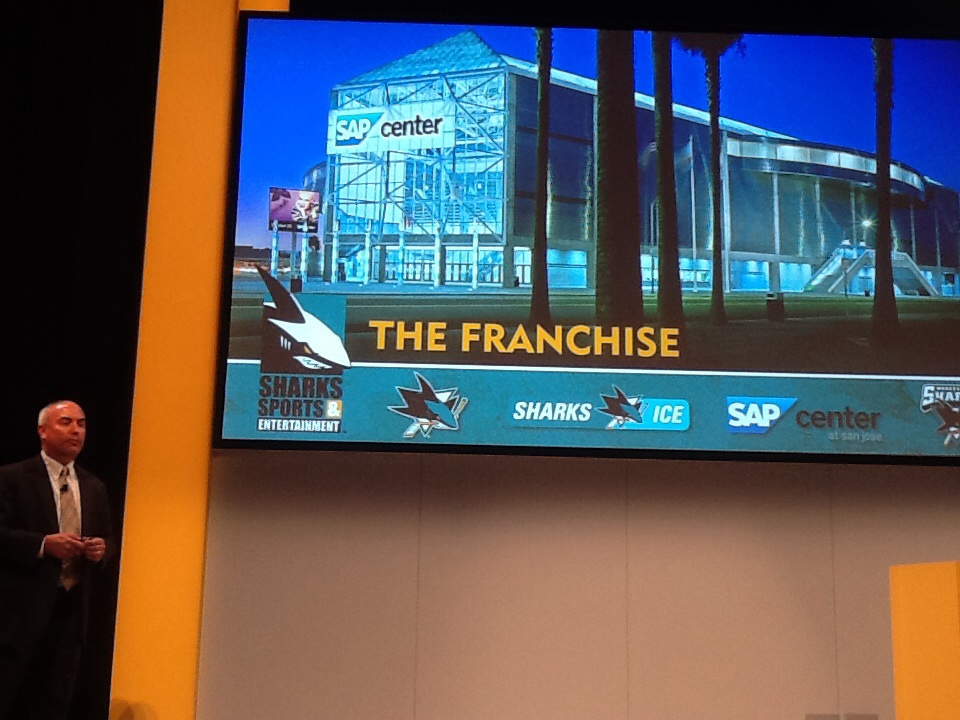 The Sharks run their core business on SAP Business By Design and also have begun to leverage SAP SuccessFactors for a Talent Management Solution — being a  typical SME company, they have the challenge of minimal IT resources.. 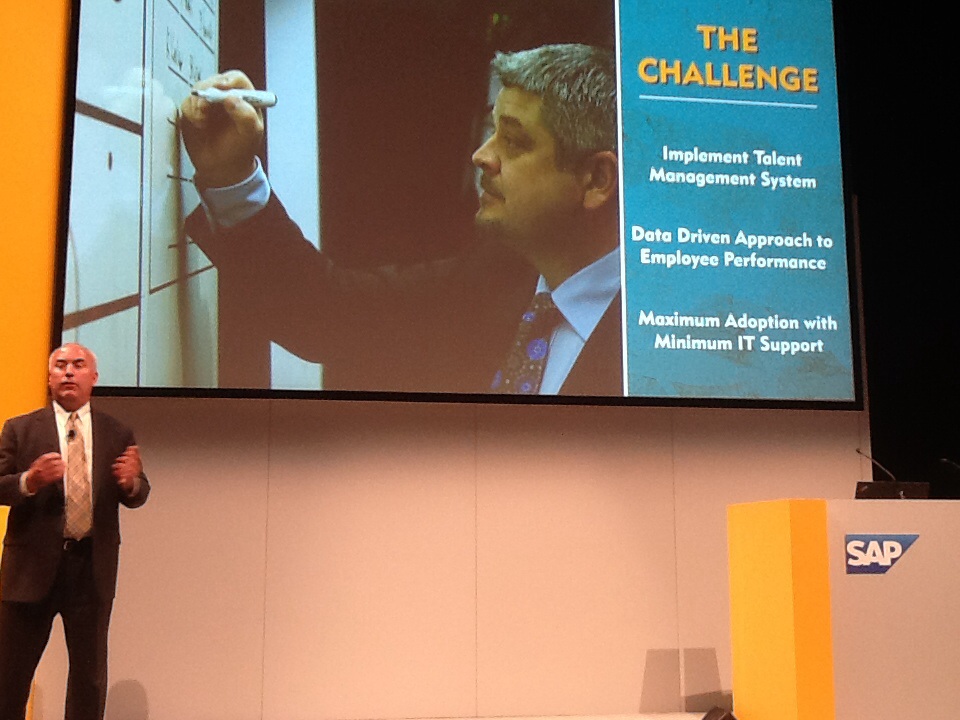 The conversation around their SAP Successfactors solution was a typical Line of Business (LOB) dialogue — as we move into the Cloud, we increasingly have to have these type of discussions and then tie the solution back to the IT implementation and key integration of back-end systems etc.  But smaller organizations don’t have large IT organizations, so the challenge is to get it right and aligned to the business from the get-go. 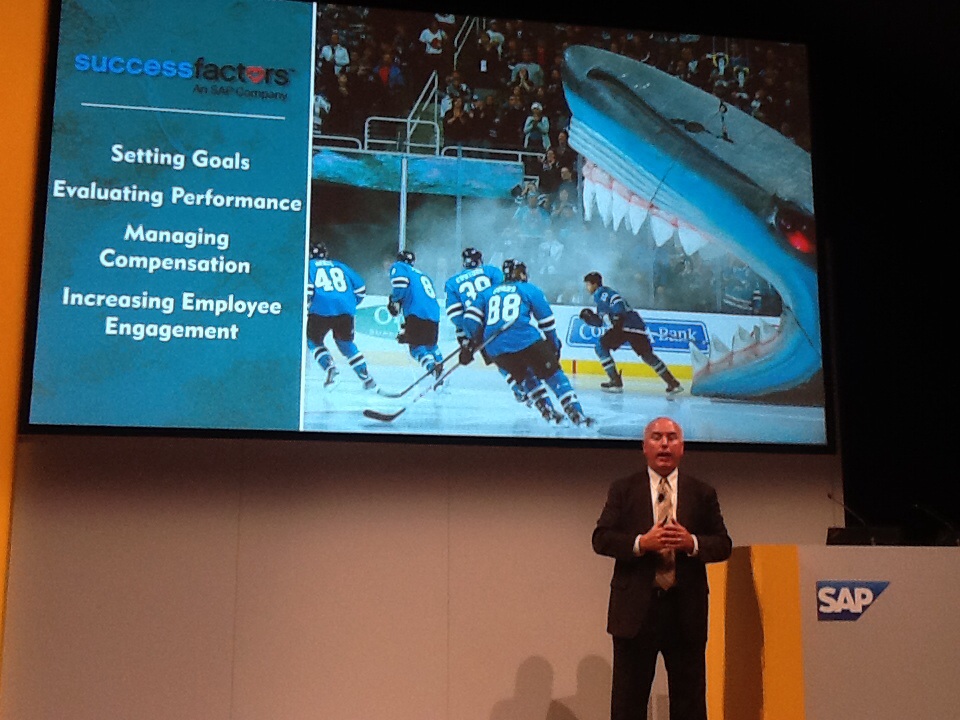 SAP  has made a major commitment to Lines of Business (LOB) solutions, as witnessed by an entire campus at the SAPPHIRE NOW event dedicated to LOB solutions.  John”s presentation was indicative of this focus – a business discussion of setting goals, measuring  performance and managing key aspects of the business including employee compensation and how well the company is engaging with its employees.   This was not an IT and technical discussion first, but one about the use of SAP and SAP SuccessFactors solutions to achieve tangible business outcomes. 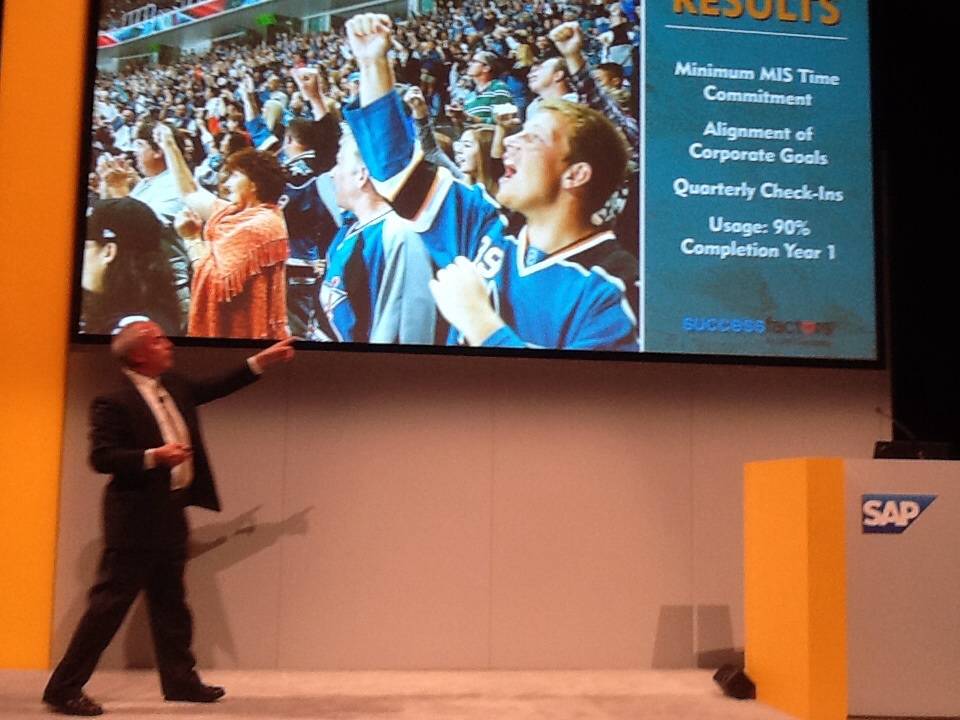 John spoke to the results the San Jose Sharks have achieved and their use of SAP JAM has enabled both internal and external communication and collaboration.  As a nearly daily user of SAP JAM I could identify with this quite clearly!  We used SAP SuccessFactors JAM extensively for our SAPPHIRE NOW planning and I can’t even imagine going back and doing it the “old way” next year. 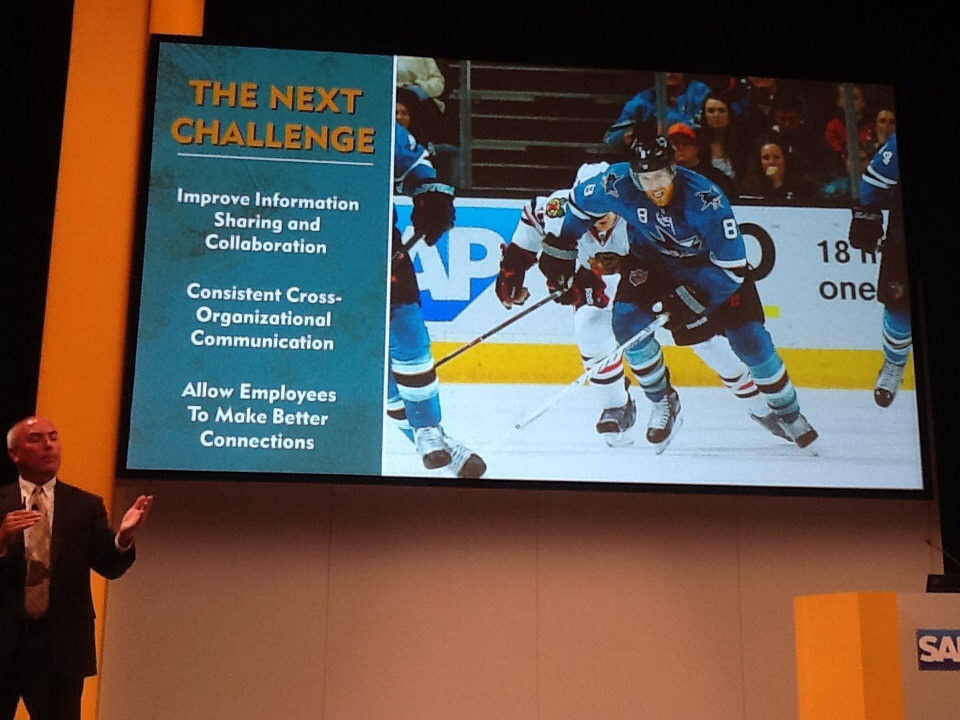 John talked about extending the solution to include external aspects including the overall fan experience — the Sharks’ use of SAP SuccessFactors allows some of that, and I would imagine integration of SAP Big Data and analytics would allow this to be even more of a complete end-to-end experience. 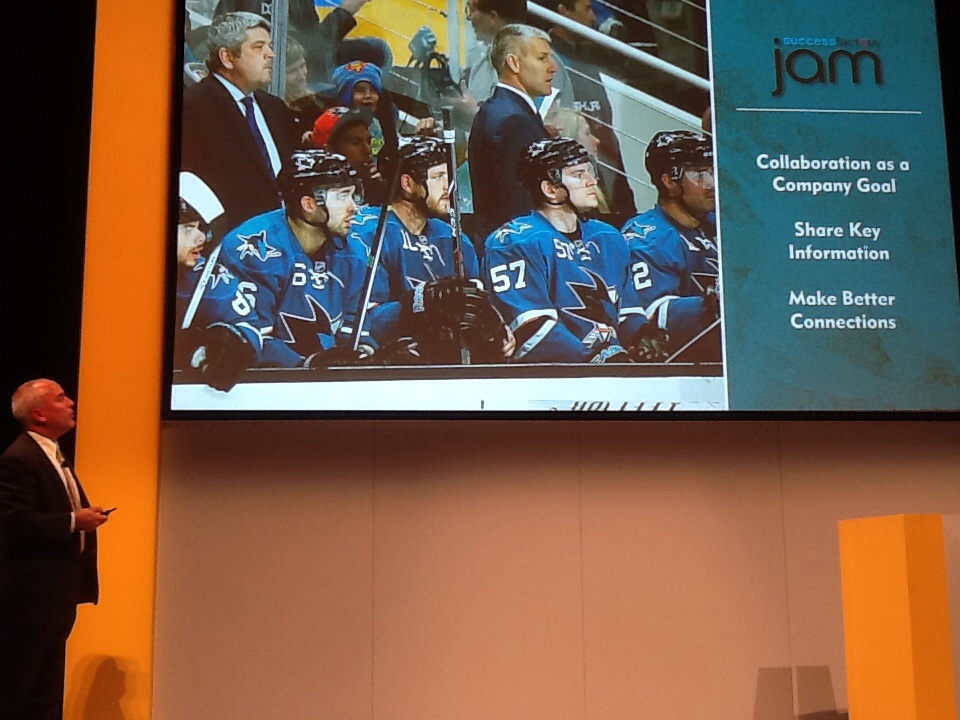 SAP SuccessFactors JAM  has allowed increased collaboration and employees to share information better, and external usage of the solution has allowed a closer and better connection with the San Jose Sharks fans.  Since the Cloud is all about speed, the Shark’ solution had quick adoption and the mix of open and closed (private and public) groups allowed the flexibility in their adoption.  Having been in marketing most of my career I loved the example John shared of enabling faster development and distribution of media releases — a key part of a successful sports business is the management of key information. 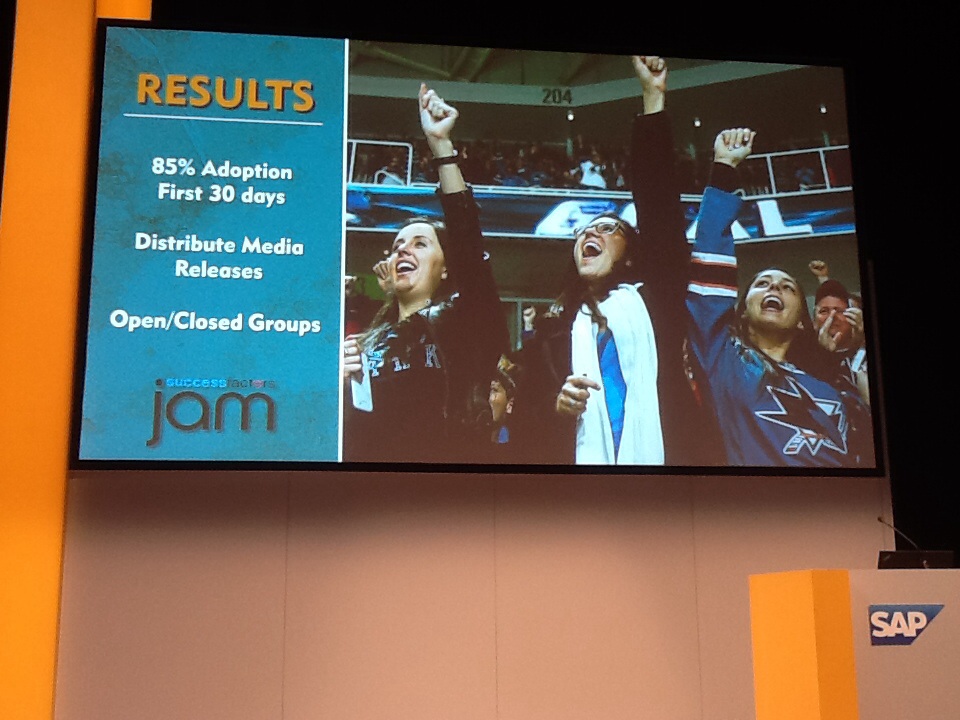 John closed with a success story centered around a testimonial from the San Jose Sharks Director of Marketing and Digital Media — another affirmation of an LOB story involving the organization’s lines of business all working well together via an SAP solution based in the cloud. 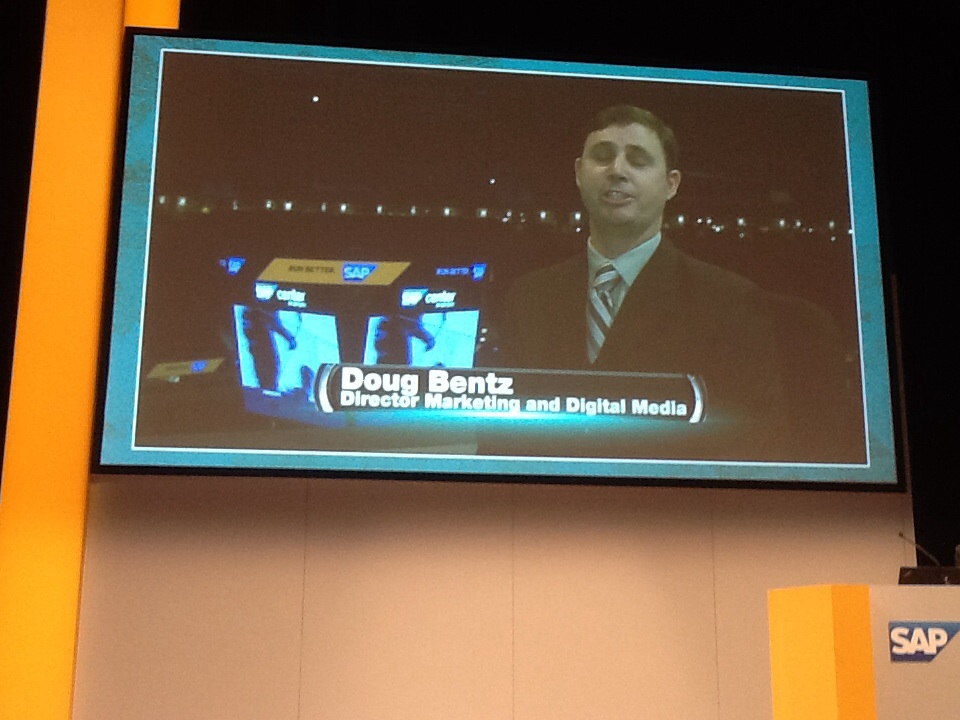 This is Sharks Territory!

Net–Net I really enjoyed John’s presentation and met with him and Jennifer Birmingham, the Sharks’ Senior Sales Manager and  Director of Corporate Partnerships.  I ended up with their business cards, a very cool San Jose Sharks pin and several “This is Sharks Territory” signs to share with my friends and family.  An awesome way to end a very successful SAPPHIRE NOW 2014 event for sure! 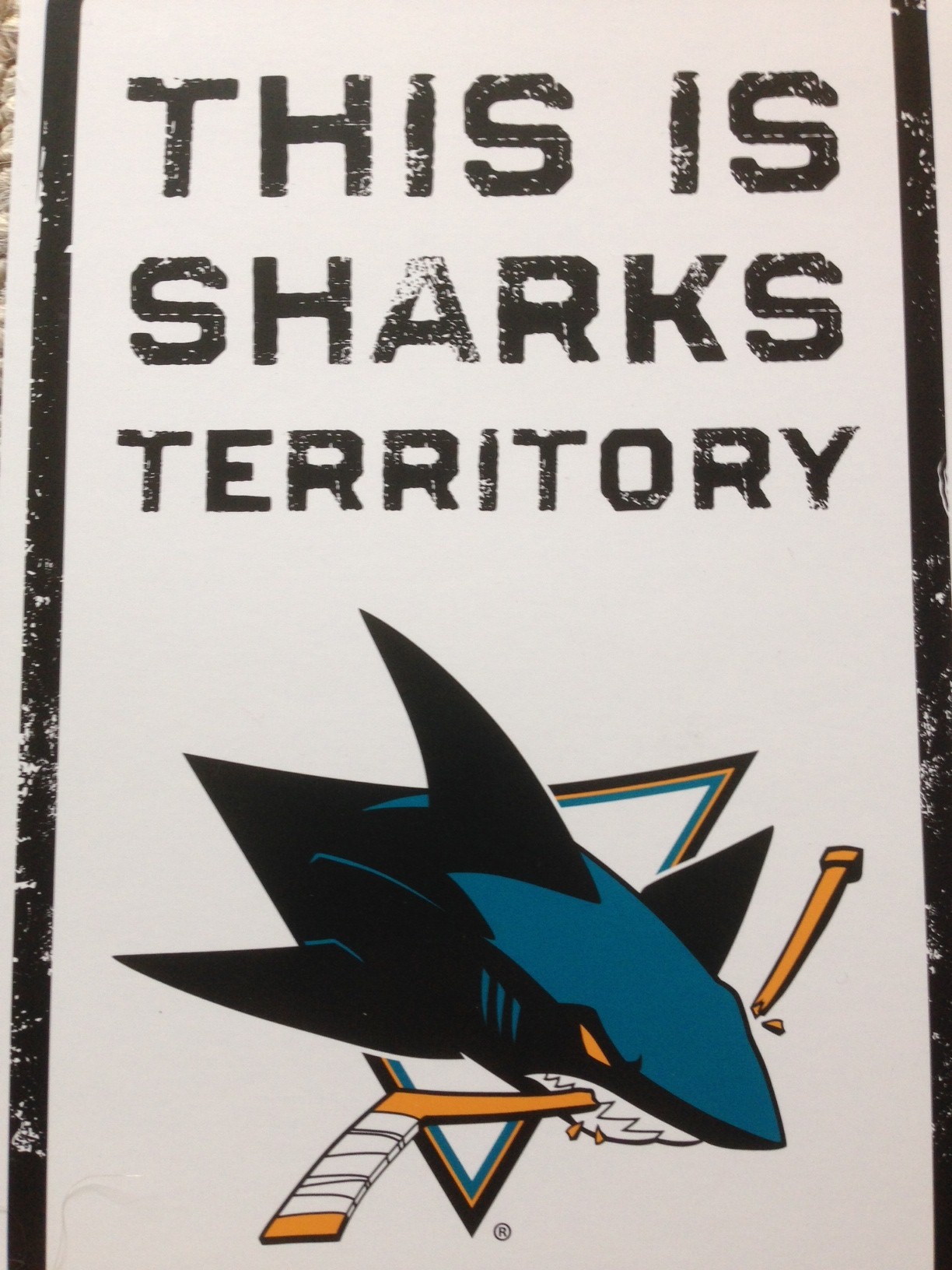