Lifestyle Subscriptions: The New Trend In The Cloud

Did the headphones with Apple’s acquisition of Beats Electronics and Beats Music distract you?  While there are obvious benefits in helping Apple expand its “coolness” factor or by acquiring the superior headphone technology and brand, the $3B deal was to address a significant gap in Apple’s revenue model.

Apple changed the way we discovered, purchased, and consumed music in 2001 with the birth of the iPod and iTunes music store.  The disruption it caused to the music industry was monumental, all but killing mediums like CDs, and actually killing stores like Sam Goody and Borders.  Buying a song for 99 cents and being able to download and listen to it from anywhere gave people a new way of experiencing music in 2001, but in 2014 technology and customer expectations are disrupting the model Apple created to disrupt the music industry.

In our content driven world, and with it moving into the cloud, there is no real reason to not feast on as much of it as we can. But at 99 cents a song, you can only consume a very small fraction of the hundreds of thousands of songs available.  Which is why music-streaming subscription service Spotify has grown in popularity with over 40 million active users – ten million of them being premium subscription members.  By paying a $9.99 monthly fee for the premium service, Spotify members can play any song, from anywhere, on any device, and even download music & listen offline in high-quality audio.   So, where $9.99 buys you 10 songs a month, Spotify allows you to access millions of them for the same price.

In addition to the unlimited supply of content available via subscription offerings, the social component of experiencing content is also incredibly important to modern day consumers.  As individuals, we love to listen to music, but we may love the connections it creates with friends even more. We learn about new songs and genres from the communities we form around artists. And there is no doubt the popularity of Spotify has much to do with the social foundation the service is built on.

What worked 13 years ago isn’t working today as Apple has seen their iTunes revenues diminish quarter after quarter to fierce competition from Spotify, Last.fm, Pandora, and others. 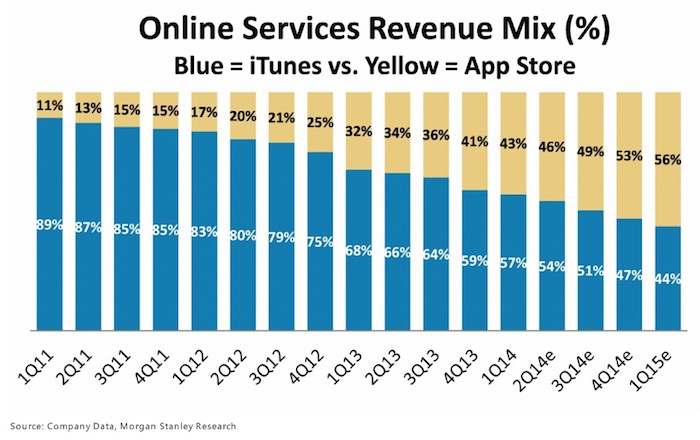 Beats was a collaboration between Dr Dre and Jimmy Iovine.  While Dr. Dre may be the more recognized name of the two, Jimmy Iovine has a long rich history in the music industry, founding Interscope records and co-producing Eminem’s movie 8-Mile.  He has been in charge of the Beats Music subscription service and now has a full time role at Apple.

Simply put, this was more about Jimmy Iovine than it was about Dr. Dre.

Everyone Needs To Rethink Subscriptions

The early steps for subscriptions and the disruption of the cloud was for consumers to think about paying a monthly fee, instead of a larger up front fee.  Now, consumers are demanding disposable subscription, where they pay a fee, use the item or service, and then return or dispose to get the next item.  Services like Rent-a-Runway or Dollar Shave are great at giving you what you want to consume at a fraction of the price.  Jake Kuczeruk, the CMO of the Tie Society, allows his customers a great deal of flexibility in how they consumer ties.  For $20 a month, you can either buy one high quality tie, or get three different ties per month – use one, then drop it in the mail for a new one to arrive at your doorstep.

If you had asked consumers about renting a tie delivery service 10 years ago, most would have laughed you out of the room.  Today, consumers have the power to make decisions to whether buy their ties, or have a selection of “disposable” ties delivered to their door for a fraction of the cost.

There is an additional ripple effect for these subscriptions as well.  Amazon Prime members spend twice as much as non-Prime members.  Consumers trust organizations that provide them great service.  By delivering great value, consumers reward with longevity, loyalty, and fantastic word of mouth.  The old of model of selling units and moving merchandise has changed – probably forever.  Google Shopping Express provides up to same day delivery of goods from Whole Foods to Target or REI.  An informal survey of users in the Bay Area show that in just a few short months of the experiment revenue per delivery and per household is markedly on the rise as consumers shift their lifestyle to this service.

We’re only at the beginning of the transformation from the traditional transaction-based, product purchasing economy to the subscription-driven relationship-based one that puts customer-centricity at the center of the business model.  But the change is starting to accelerate, as more consumers take advantage of the value and flexibility subscribing to products and services fit with their rapidly evolving lifestyles.

Todd has grown tired of carrying cases of Diet Coke from Costco and now lets Google do it for him.  You can follow him on Twitter @toddmwilms and on his LinkedIn profile.

Brent likes carrying his own groceries, but vows never to pay by the song ever again – his tastes are just too eclectic for that – and yes you can see him sporting a pair of Beats headphones in an airport near you.  You can follow him on Twitter @BrentLeary or on his blog.