Mining industry has always been a risky industry. In exploitation process, accidents are inevitable. Every year, workers die in mining disaster. However, there can be even more workers remaining trapped underground whose life or death was unclear.

Recently, there was a mining disaster in Turkey.

— Turkey’s Mine Disaster Is Worst in History, Kills Nearly 300

What an unbearable suffering for the missing workers’ families! They don’t know whether their loved ones are still alive, are afraid of suddenly hearing their death but still keep a glimmer of hope. What if people can know their specific location? If trapped workers can be located accurately, so much time will be saved and they can be rescued in a much shorter time! In such situation, time is gold! As one more second passes by, the possibility of survival of workers is lower!

What can we do? Can we use GPS (Global Positioning System)? Definitely not. As we know, mining accidents majorly happen underground. The deeper it is, the weaker the signal of device is.

Thanks to the modern technology, we even have a better tool. Have you ever heard of indoor positioning system (IPS)?

As far as I know, Wi-Fi signals can be used for IPS. There must be at least three Wi-Fi devices to locate a person. Based on the pre-defined algorithm, distances between the person and each Wi-Fi device can be calculated. The steps are listed below. 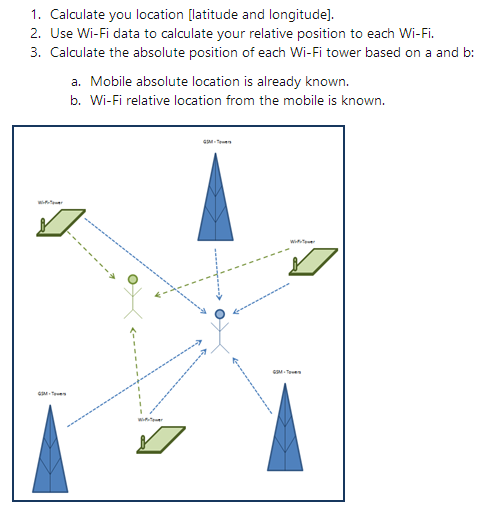 Using the same concept, we can locate trapped workers as well. For example, every worker will be given a device which has unique MAC address associated with the identity of the worker. Hundreds of independent Wi-Fi emitters are installed in tunnels, underground and ground. Every Wi-Fi’s MAC address and physical locations are recorded. When accidents happen, rescue team analyzes out the available Wi-Fi emitters and uses them to search workers’ devices. Once more than three Wi-Fi emitters sense the existence of workers’ devices, their locations can be determined based on algorithm.

What an amazing technology! It means more people can be saved in a much shorter time, because we solved the most difficult problem which is to find the exact location of trapped workers!

Moreover, the best treatment is prevention. Actions can be done before tragedy happens. To predict mining disaster used to be a mission impossible. It requires enormous amount of computation, which was unreachable by neither human brains nor machines in the old time.

Now we live in an information explosion era. Up to year 2013, the total data stored in the world reached 1.2ZB, as large as 320 times of information stored in Bibliotheque in Alexander. To analyze that tremendous amount of data, Cloud Computing was created.

Geological data such as density and temperature can be recorded at all times. Every single change in any geological scale can be captured.

This large amount of data can be transmitted to the Cloud, which can process billions of calculation in a very short time. Thus, analytical models can be built to predict future changes in geology. By analyzing geological data changes, mining disasters can be predicted.

What I talked here is only a tip of the iceberg. There are so much benefit that digitalization can bring to us. Digital identity and positioning system help to find trapped workers and cloud computing helps to predict disasters. In this new world, more digitalized, more lives are saved!

Turkey’s Mine Disaster Is Worst in History, Kills Nearly 300

Big Data: A Revolution That Will Transform How We Live, Work and Think

(Photo of book is from:  http://www.kurzweilai.net/big-data-a-revolution-that-will-transform-how-we-live-work-and-think) 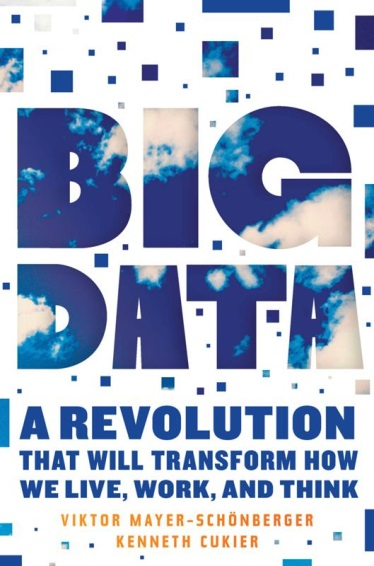 Very interesting and informative. Jia you!!

Nice ideas, I learned a lot!

Thank you, Mr. Becker! I am also learning! Here I can only talk about what I imagine, but I still don't have enough knowledge to actually realize it or prove that it is feasible.

Thank you, Mr. Benedict Fernandez. I hope I can make it to the final 2.

Hi Zhiyue, this is very interesting and really shows how some imagination and lots of hard work on your part can produce such great magic! I am very heartened to see that your work can really make positive impact in the world of mining to prevent disasters from happening and when they do happen, to quickly rescue those miners trapped.  All these also leveraging on the availability of the latest technology!

I wish you well and hope you win BIG and make us proud in Singapore!

Thank you for your compliment, Crispian! I also strongly hope such technology can be realized one day, so that more innocent lives can be saved.

Singapore is now like my second hometown! I also feel so honored to study and live in Singapore, so that I could have this treasured opportunity to present myself. In this competition, I am representing Temasek Polytechnic. I hope I could win and make my teachers and schoolmates proud!

It's heartwarming that youngsters like you are taking a keen interest on how to make use of technology to save lives. Good research topic, keep it up, and all the best!

Thank you! Indeed, technology is supposed to make a better life for humans. It should be prior for people to use technology to save others' lives.

Glad that you have a keen interest to learn beyond the fundamentals of data mining. Keep up with the good work!

Thank you Ms. Serene! I will keep up by learning harder!