The principle issues in accounting for foreign currency transactions and foreign branches are to decide which exchange rate to use and how to recognize the effect of exchange rates in the financial statements.

In India, Financial statements are prepared in Rupee, which is the reporting currency. All the transactions are done in rupee and, therefore, recorded in rupee. However, if enterprise has the transactions in another currency, say, in US,  dollars, because the enterprise is making export sales or importing material, plant or taking loan from abroad, in these cases, transactions shall be in foreign currency but recording and reporting has to be done in rupee, then the question of translation of foreign currency transaction in INR arises.

Further, there may be a case that an enterprise domiciled in India has the foreign operation in the form of –

a)   Branch in foreign currency: The transactions of foreign branch have to be incorporated in Head Office books as the financial statements are presented for whole enterprise including branches, domestic as well as foreign. The transactions of foreign branches are dominated /measured in the currency of the country in which the branch is situated, for example, if an Indian company X Ltd. Has a branch in New York. The branch must be transacting in US dollars where as X Ltd. Reports in rupee, therefore, an accounting standard is needed which will prescribe the method of translation of foreign currency in to reporting currency ( in this case , rupee).

c)   Associated or Joint Venture in foreign currency: The need of  Accounting standard will be felt when proportionate consolidation method under AS-27 [Financial Reporting of Interest in Joint Venture] is applied for jointly controlled entities and equity method of accounting is done in case of investment in associate in consolidated financial statements as per AS-23.

AS-11 (revised 2003) shall be applicable in respect of accounting periods commencing on or after 01.04.2004 and is mandatory in nature. The revised 2003 AS supersedes AS-11 (1994). However, accounting for transactions in foreign currencies entered in to by the reporting enterprise itself or though its branches before 01.04.2004 will continue to be done as per AS-11(1994).

The accounting standard applies to –

Non – Applicability of AS-11

The accounting standard is not applicable to –

Currencies are legal means of payment in a country.

For each monetary amount that we enter in theSAP system, we must specify a currency. Currencies are entered as per ISO standards, for example, USD for US dollar, INR for Indian Rupee.

Few common terminologies associated with Currencies are as follows:

a)   Reporting currency – is the currency used in presentation of the financial statements.

b)   Foreign currency – is the currency other than the enterprise currency.

f)    Index currency: A country specific theoretical currency used in some countries with high inflation as a comparison currency for purpose of statutory reporting.

In SAP, we define various currencies used by our company/company codes

g)   Exchange rate – is the ratio for exchange of two currencies as applicable to the realization of certain assets or the payment of specific liability and even recording of specific transactions or group of transactions.

h)   Average rate – is the mean of exchange rates in force during a period.

i)     Forward rate – is the exchange rate established by the terms of an agreement for exchange of two currencies at a specified future date.

j)    Closing rate – is the exchange rate at the balance sheet date.

k)   Monetary items – are money held and assets & liabilities to be received and paid in fixed or determinable amounts of money e.g. cash receivables and payables.

n)   Recoverable amount – is the amount which the enterprise expects to recover from the use of asset including its residual value on disposal.

What are foreign currency transactions?

Example of foreign currency transactions are –

In order for the system to translate amount in various currencies, we must define exchange rates. For each currency pair, we can define different exchange rates and then differentiate between them by using exchange rate types.

In Financial Accounting, currencies and currency translations are relevant in the following circumstances-

As we already defined in the previous section, Relationship between two currencies in known as Exchange Rate.

In other words, exchange rates are used to translate an amount in to another currency.

We define exchange rates in the system for the following purposes:

To translate amounts posted or cleared in foreign currency, or to check a manually entered exchange rate during posting or clearing.

In order to determine gains or losses from exchange rate differences.

Note: Exchange rates are defined at client level and therefore apply for all company codes.

We do not have to enter all exchange rates. There are many tools that can be utilized to automatically determine other exchange rates from existing ones.

Exchange rates for different purposes for the same date are defined in the system as exchange rate types.

The base currency is INR. You want to translate GBP to USD. To do this, the following entries must be made in the table for maintaining currency translation rates:

Translation from GBP to USD is then carried out automatically. The translation is done as though this exchange rate (GBP-> USD) was actually entered in the conversion table. 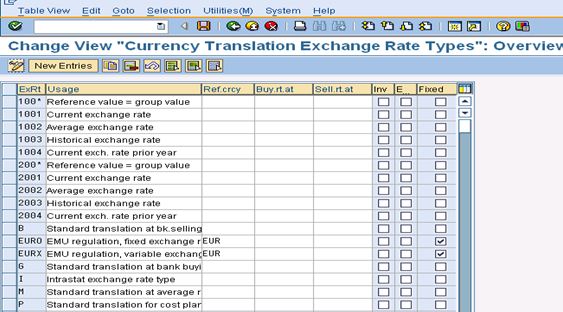 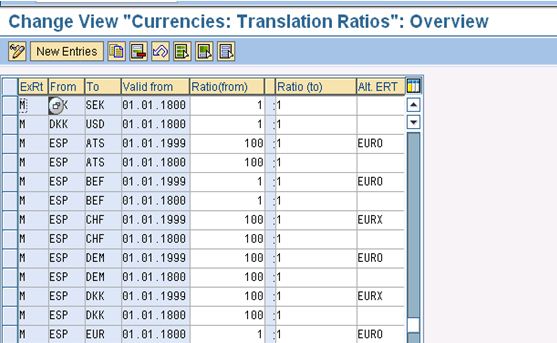 In this section, we define the specifications required for the valuation of foreign currency balances e.g. Bank accounts holding foreign exchange and Open Items in foreign currency – Customers and Vendors

SAP provides various Valuation methods. We can also create our own key starting with Z.

Double click on BSK to display the configuration parameters 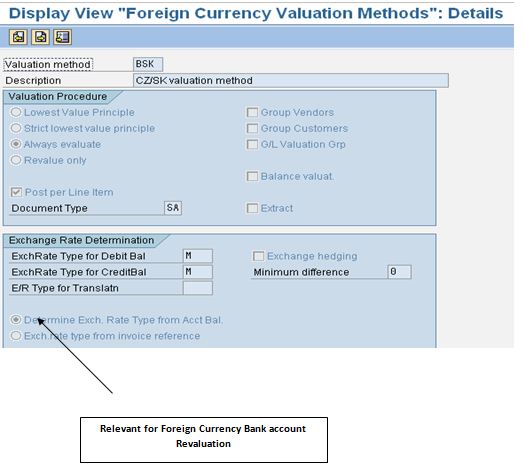 In the valuation procedure, various configuration options are available:

Lowest Value Principle – The Valuation is only displayed if the valuation difference between the local currency amount and the valued amount is negative that is an exchange loss is taken place. The valuation is carried out per item total.

Always Valuate – If you select this procedure, revaluations are also taken into consideration.

Revalue only – if you select this procedure, system only does a revaluation if applicable but does not do devaluation where there is exchange loss.

Reset- if you select this parameter, then the open items is valuated at the acquisition price. This way the valuation difference is set to zero. The old valuation method is reset. The account determination is reversed. The revenue that arises is posted to the expense account.

Exchange rates are types that are attached to the valuation methods.

A document type SA is attached to Valuation method. 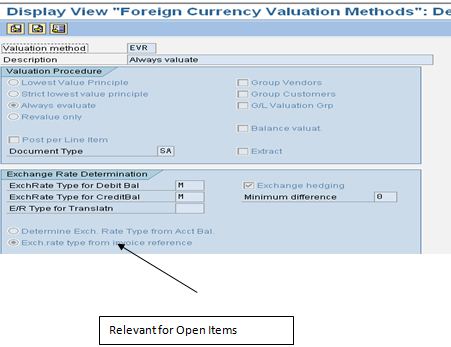 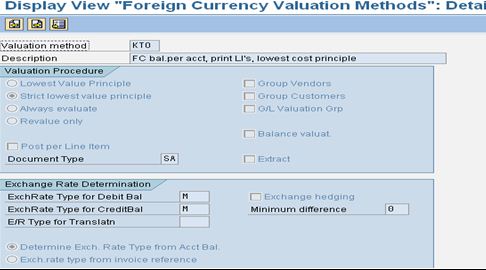 Exchange Rate Difference key: Can be kept blank or you can enter a key with 4 digits e.g. 0001. In case you create this exchange rate key then the same has to be updated in the GL code of the foreign currency account i.e. the control data tab which has the field exchange rate difference key. Only when it is attached, the system will re-valuate the foreign currency account.

Expense account: We need to enter the expense GL code for unrealized foreign exchange loss. The loss on revaluation is unrealized and will be automatically reversed in the next month e.g. 2345678  unrealized exchange gain/loss trade.

E/R gains: You need to enter the revenue GL coded for unrealized foreign exchange gain. The loss on revaluation is unrealized and will be automatically reversed in the next month.

Here we will enter the GL codes for AR and AP (the reconciliation account).

We can enter different GL codes for currency and currency type or we can keep it blank.

There can be exchange rate difference on account of document posted through MM process, in such cases we need to maintain the exchange gain/loss account for KDM (Materials management exch.rate diffs) key using Transaction code – OBYC.

Exchange rate differences in the case of open items (KDM)

In the case of open items, Exchange rate differences arise when an invoice relating to a PO is posted with a different exchange rate to that of the goods receipt and the material cannot be debited or credited due to standard price control or stock under coverage/shortage.

Double click on KDM to display the configuration parameters:

Now system will post the arising Gain/loss automatically to the assigned GL account, for this purpose default cost centers are required to be maintained for the gain/loss accounts to which the posting will be done using transaction code – OKB9

This is a very useful note, it helps all FI functional consultants, keep and the good work and keep sharing such meaningful notes.

Thank you so much for your feedback.

Thanks for sharing such a good document which would be helpful to all the FI functional consultants. Keep sharing your knowledge like this.

Thank you so much for such a nice feedback.

Good document...thanks for sharing the knowledge..

Thank you so much Ramnath

Nice document It is good to see the document has relevant accounting standard with respect to Currency translation/valuation.

Thanks for sharing your knowledge. keep up the good work

Thanks a lot Vivek

Thank you so much for your feedback.

Thank you so much. Nice to see your comment.

Very nice document. Thank you so much for sharing the knowledge.

Nice to see your document in SCN ...very helpful.

only 2 words from my side:

Nice to see your comments, Thank you so much.

Its a very useful and informative document

Thank you so much for the nice feedback.

Thanks for sharing document;

Thanks you so much.

Nice document, thanks for sharing, keep it up.

Thank you so much Siddu.

You can also add the config on the balance sheet account where the entries are posted to.

What about historic data ?.How will that be corrected ?

My client is doing business in Company Code Currency (currency type - 10) in USD and we have ONLY USD currency define as local, global and CO object currency in our ledger. My client don't want to post any transaction (any transaction code through all module) other that USD currency, I mean no any foreign currency. Could you please let me know how can I make necessary change in current system. I know there is do through substitution rule but I am not technical knowledge, I am in functional area.

Thank you and appreciate for your time,