My take-aways and verdicts on #ASUG2014 and #SAPPHIRENow

In my previous post  I promised a follow-up on how well the ASUG 2014 and SAPPHIRE Now conferences met my expectations going in. Of course, I am not the average attendee; my first ASUG Annual Conference was in 1999, and ever since then, I have attended every year but one, as a speaker, an ASUG volunteer, and also in recent years, as an SAP Mentor. I remember this conference going way back, so here are my thoughts on how this year’s experiences compared to my expectations going in- Yea, Nay. or Meh.

My enthusiasm for keynotes waned as the week went on. I do like to hear about SAP’s strategic direction from Bill McDermott, Was it being hit over the head with 60+ mentions of simple, along with runners-up simpler, simplify, simplicity, and simplest? Maybe. I liked the Leonardo DaVinci quote: Simplicity is the ultimate sophistication, I’m just not convinced that my CIO is hearing enough pain yet from our business users to justify the spend to move to Simple Finance and the other s-apps. I made it through most of Hasso Plattner’s professorial keynote; it just went on way too long, and I had a community meeting to lead. For my taste, too many keynotes, and too much time carved out for them that could have gone to the main purpose of the event for me, education.

The Jon Bon Jovi concert was fine; I just would have preferred more of his own stuff and fewer covers. Somehow wrapping up the set with Twist and Shout instead of Bad Medicine was more than a little disappointing. To be sure, any live concert is a good time, I could have used more the main guy, as in, a whole lot more.

I found a few more ASUG sessions to add to my agenda and managed to come away with a decent education program to show for the time and money spent. All of the ASUG speakers were well-prepared on their topics, and I especially enjoyed hearing from customers about their various experiences with GRC 10;even though several of the use cases are unlikely at my current organization, I can still bring back the lessons learned. From the Internal Controls SIG program I got a good overview of auditing SAP for fraud and use cases for SAP’s Fraud Management solution. Both of the SAP HANA sessions I attended were informative: I particularly enjoyed getting a good grounding in HANA security concepts and tools, as well as hearing about how SAP HANA is not only for large enterprises. On the whole, despite the reduction in the number of sessions, it was better than I had feared, mostly because I had so many other things to do. I did hear some attendees saying they wished there had been more, and they wished they had left Orlando sooner, since there was so little for them on the last day. Ah well, they had to get that last keynote in.

I was fortunate to be able to attend several SAP Mentor meetings;they are a highlight of my time at any SAP conference and this year was no exception. I enjoyed meeting some of our new Mentors, and was fortunate to participate in discussions and hear insights shared by several SAP executives. It was especially great to reconnect with so many Mentors who traveled long distances to Orlando from overseas, including (but not limited to) Abesh Bhattacharjee , Graham Robinson, Steve Rumsby , Aviad Rivlin, Martin Gillet, Owen Pettiford Aschmann Paul , as well as numerous Mentor alumni from near and far.

As for ASUG volunteering, I enjoyed my time volunteering in the ASUG Hub very much. I hope all my readers made it there; ASUG volunteers and staffers were assisting conference attendees to update their ASUG.com profiles, register for Influence activities, fill out applications to volunteer, and much more.

The Security and Internal Controls SIGs joint community meeting was, as expected, a highlight of the week. I was very pleased that we got a good turnout even though we were competing with lunch right after that super-long keynote. The discussion was lively, both about future plans for the SIGs and potential new Influence initiatives. If you did not attend a community meeting, you really missed out.

Best of all, I get to make good on my pledge to Doctors without Borders based the attendance at the meeting. Have you made a pledge or sponsored anyone yet? Feel free to sponsor me here! 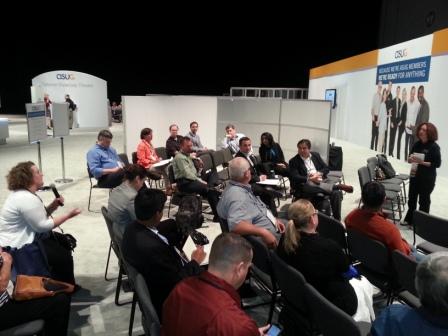 It was great to see everyone who made it to Orlando; thank you to all the ASUG speakers, volunteers, and staffers who worked for so many months, and especially the SAP Mentor wrangler Mark Finnern who single-handedly kept us in line and made it all happen so smoothly for the Mentors.

The third floor where ASUG sessions were was very busy.  I didn't do everything you did but I appreciate reading your assessments.

Tammy,
If you did not do everything I did, it must have been because you were too busy doing so many other things. I sometimes wonder if you are not secretly triplets!

Thanks for encouraging readers to sponsor me on the Doctors without Borders challenge. I welcome and appreciate any and all support for this worthy cause.

It is very rare that a SAP Mentor gives a Meh for Keynotes. That shows your genuineness & 'SIMPLICITY'.

Life is not 'Simple' nor are the businesses nor the regulations within Countries. Simpler is utopian but can be leaner & professional. The mute point is how SAP can assist us to achieve that.

Your comments on the SIG Sessions lights up for further study.

From what I heard, I gather that the Simple Financials and other S- apps will be less complex to configure and implement, but I agree that organizations today and the regulations with which they are required to comply rarely are simple. As for my Meh on the keynotes, it was not that there was anything wrong with, or even mediocre about, them; for me, it was just way overkill.

That is my chief frustration with the event; ever since SAP and ASUG came together in the co-located conferences, the focus continues to increase on SAPPHIRE and the decision makers to whom SAP wishes to sell solutions, while the ASUG customer-driven education to those of us responsible for implementing and supporting them is squeezed and shrunken, every year less and less on offer. Back in the day when I was a Community Program Facilitator, each SIG used to have a full education track; this year our SIGs had less than half a track each. I am just glad that as an ASUG volunteer, I earn a complementary registration. It would be difficult for me to justify the expense of the travel *and* the registration fee.

Josh Greenbaum (@josheac) has suggested that the right word isn't simple, but "simplify"  I can't find an original link to his blog, but he is quoted here:

To me, this makes more sense.

Thanks for sharing Gretchen, one thing I thoroughly enjoyed was seeing all the "usual" smiling faces (from all the attendees). There is never a lack of enthusiasm or encouragement about our IT futures in the SAP ecosystem no matter how 'SIMPLE' things are going to be be 🙂 .

I always find coming back from these type of events makes it feel like I have come back from a professional vacation - optimistic, refreshed and focused on the new opportunities! I look forward to the same at d-Code later this year, but more importantly the friendly, smiling faces.

I, too, am glad to see most of the "usual" smiling faces from my colleagues at the event, although I missed many who were not able to attend, including  Jim Spath and  The specified item was not found. but I would not go to far as to call it a vacation. Juggling my ASUG volunteer responsibilities with my need to attend ASUG education sessions and desire to attend SAP Mentor meetings keeps it a bit too hectic to be refreshing. But it was great to see you there, and thanks for sharing your perspective.

I never return from these things refreshed. There's always too much content and not enough time. I always hit the buffers half way through the afternoon of the final day and have to just stop. Last week was no exception.

I'm really trying to avoid that this year. There's a big "get yourself on HANA" push, and I'm going to stay focused on how we do that, and on getting the management on board. At least, that's the plan. We'll see in time how successful I am!

On a positive note, it was good to meet so many people in person that I'd been communicating with for years on Twitter and here on SCN, as well as some old friends. A proper family reunion 🙂

Thank you for the write-up, Gretchen! Especially liked the "yea / nay / meh" classification that I might steal shamelessly. 🙂

Thanks Gretchen, Unfortunately, despite having my proposal accepted, I couldn't attend in person, so it's good to read such a thorough and balanced recap.

I am sorry that you were unable to attend. Remember that keynotes were recorded, should you wish to view them, and presentation slide decks are being made available on ASUG.com, under Events.

I appreciate your comments.