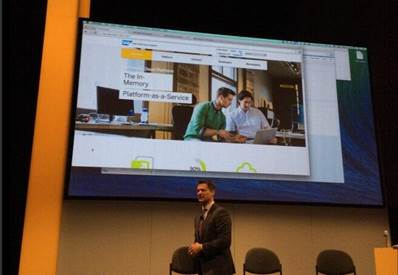 I’ll let that sink in for a moment. Steve Lucas. PaaS. Sapphire. A very strange combination.

I’ve been covering the SAP PaaS for over 2,5 years (My first blog about Neo was in December 2011) and much of what I saw wasn’t new to me (there are few exceptions – for example,  the use of hybris in the HANA Marketplace to publish applications). I’ve seen Cloud-related executives and Product Managers (Björn Goerke, etc) talk about the platform in the past but I’ve never seen an executive at that level discuss the PaaS in such detail and with such enthusiasm.

What is more interesting is that this press conference took place at a Sapphire rather than a d-code.

Steve also provided an extended version of the SAP Cloud story that expands beyond the HANA Enterprise Cloud (HEC).

Note: I wouldn’t steal Steve’s thunder and describe how he sees this evolution. I hope that he’ll blog it about the topic soon.

The HEC and the applications that run on it (like SimpleFinance) is the major focus of much of this year’s Sapphire and this is a problem that I described in my pre-Sapphire blog:

The question then becomes what comes after the HEC? The applications being promoted in the HEC are largely existing OnPremise applications – enhanced with HANA – but still old applications.   They aren’t the future.

The message that Steve provides shows a coherent path forward for customers and partners looking to bridge HEC-based applications with other SaaS applications. There were perhaps 40 influencers and analysts who viewed Steve’s press conference live and about 20 Mentors who heard his message during a later meeting.  The problem I have (and one that the Mentors later discussed with Steve) is: why wasn’t this message presented during the keynote.   If SAP is promoting itself as The Cloud Company, then the complete journey must be depicted to customers rather than just concentrating on the first step.