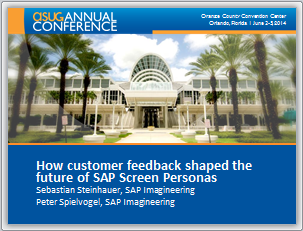 We had a great session this morning on “How customer feedback shaped the future of SAP Screen Personas.” Sebastian Steinhauer and I discussed the specific user feedback we have heard over the past year and how we integrated it into the next generation of the product.

With the requirement to remove the dependency on Microsoft Silverlight, which they are phasing out in 2021, we had the unique opportunity to rewrite SAP Screen Personas with all the knowledge we learned from how people actually use the product. Instead of “if only I knew then what I knew now,” the development team used that as the starting point.

In a nutshell, here is what we heard.

The first four items on the above list represent the themes of our next release.

Here are the main points we covered.

We plan to build Persons 3.0 into the Web GUI. This will mean a simpler architecture, no separate client application, and no more Silverlight dependency. And, we expect better performance!

The Web GUI currently leverages lazy loading, rendering information when it is required, rather than the pre-fetch approach of Personas 2.0. By integrating into the Web GUI, the next Personas is planned to inherit this functionality. We expect this will have a major impact on performance, especially when transactions contain large tables. For optimal performance, we continue to recommend using table variants to eliminate unused columns.

More powerful scripting was a common request. So, to support power users in Personas, we plan to make the scripting engine even more powerful.

This is envisioned to include looping, nested IF conditions, and logging capabilities. We also plan to make it possible to maintain a script library independently of the buttons, so it will become much easier to reuse scripts across flavors.

But, the simple record/playback capabilities that were very popular in Personas 2.0 will remain.

While SAP Screen Personas has long been praised by customers for its ease of use, some designers wanted Personas to behave more like their customary design tools. They appreciated all the power in the advanced properties editor, but wanted those items more accessible through the standard menu structure. These are great suggestions and we plan to include these in the next version.

We know customers have invested many hours of work in building flavors to streamline their SAP screens. We plan to design the migration process to be as simple as possible. We plan to have most flavors created in Personas 2.0 migrate easily into the next Personas version.

That captures what we are planning for the next version of SAP Screen Personas.

As for #5 on the wish list above, iPad compatibility, all we can say now is that we are working on it. The question often comes up “Since this is HTML-based, can’t I run it on my iPad?” Since we are planning to build the next Personas version into the Web GUI, this means Personas is limited by the fact that currently, Web GUI does not support iPad. Some gaps include F4 key, right click, and clearing pop-up messages. We plan for SAP Screen Personas to inherit whatever iPad capabilities that Web GUI has.

We are working with the Web GUI team on this.

Off to see one of the customer presentations on how they used SAP Screen Personas to drive productivity through personalization.

This is great Peter, and nice to see feedback being incorporated into the product like this. It addresses two of my own major concerns with the current Personas offering (Silverlight and performance).

I am concerned a little when you talk about building the next version into the WebGUI and relying on the "iPad capabilities that WebGUI has"... this sort of sounds like it is somehow out of your control. You then mention "working with the WebGUI team" - honestly IMO the customer doesn't really care what team delivers this they just want the resulting functionality. I hope this effort doesn't fall foul of a silo approach within SAP. In my mind Personas is the future in this space not WebGUI... Maybe there are some great plans afoot for WebGUI to run on mobile browsers (I don't know) - but that would require a massive rethink/redesign since the controls that the WebGUI renders were never designed with mobile in mind.

Sorry if that last paragraph sounds a bit negative, it's not supposed to be - I like the general direction you are taking with this and look forward celebrating many successful Persona project successes!

Peter I work for Zimmer Corporation. We just discovered the Personas capability and want to use for SAP ECC PM.  I would like to attend some training what is the best training for this?

We have two classes coming up in Atlanta and Dallas. Details here:

HI Peter, How will Screen Personas 3 sit with the traditional Windows GUI ?

Will it be available for that as well as the web client ?

We plan for the initial release of Personas 3.0 to run only in the Web GUI.

The planned architecture is such that it could support SAP GUI in the future. This is not part of the release criteria for Personas 3.0.

We do plan to make this capability available at some point.

Thanks for the update. Scripting was certainly an area of improvement (next to performance). Currently when you have a script with say 50 lines with Conditional IF's, its gets very hard to read through the scripts which reference Control ID's. Apart from using log=debug mode in URL, it would be good to see more debugging features.

Flavor provisioning is currently a manual process and somehow needs to be linked and automated using an existing SAP GRC/IdM system.