On the 30th of May we hosted ABAP on HANA First CodeJam in the beautiful buildings of TCS in Hyderabad, And it was a very awesome experience.

Three SAP experts and 28 motivated participants met there. After a short introduction about SAP HANA and the new tooling (SAP HANA Studio and ABAP in Eclipse), the participants started to work on the exercises. At least almost all participants some struggled on getting the Eclipse-based tooling installed. But as we had a very good ratio of experts to participants we could solve almost all issues 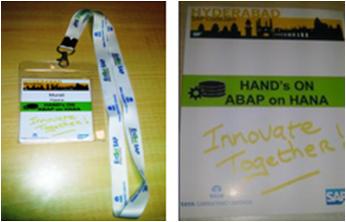 ABAP on HANA CodeJam which is more flexible and offers a lot more time (5-6 hours) for playing with the product and asking questions. The agenda in Hyderabad looked like this:

1) What is a CodeJam? + Brief overview of ABAP on HANA

Both exercises are based on simple ABAP reports so they are easy to understand. Moreover, both of them incorporate ABAP Unit tests. This is great because not only are you learning how to use ABAP in Eclipse you also get an introduction on writing automated tests with ABAP Unit.

All exercises are being done on the newest NetWeaver server release. The servers themselves are provided by SAP and run in the cloud.

Below are the topics for exercises.

The exercises were a mix between data modeling in HANA Studio and consumption in ABAP. As you might expect, for the data modelling part an ABAP developer has to recall his rusty SQL skills. But even for the ABAP part more SQL is needed with HANA. Because you want to use the power of the database you develop native SQL and do the so called “code push down” (meaning pushing the logic from the ABAP AS to the database). So with HANA using native SQL in ABAP is not evil anymore .

It’s all about code!

The participants were all ready with installations, geared up to code. It was all about ABAP on HANA, exploring the new possibilities the platform offers to develop ABAP applications on SAP HANA, leveraging the capabilities of SAP HANA. The developers were introduced to the “ABAP Development Tools” aka “ABAP in Eclipse” –Additionally, the content included few getting-started tutorials of ABAP on SAP HANA – optimizing the performance of ABAP report using Open SQL, basics of HANA modeling and its consumption in ABAP..

One of the reasons SAP CodeJam events are famous for is “The Food” and this event was no different . While taking a break from coding to have some good food, it was also time for networking – developers coming together, exchanging their ideas, sharing their learnings – having fun. 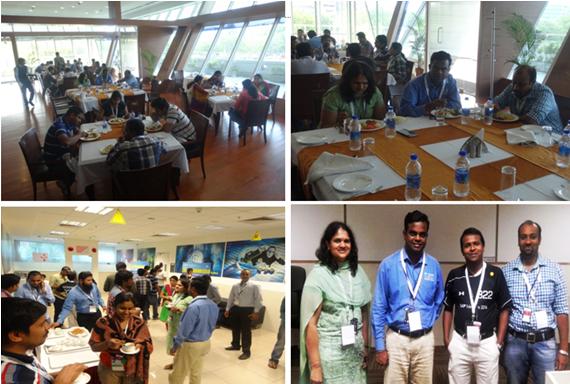 it was another cool learning and community event in a really relaxed atmosphere and for me the starting point into the new ABAP on HANA world.

I am a big fan of the CodeJam format. It is a very casual learning environment. It allows me to meet interesting people from the SAP community and I get the chance to show the newest ABAP in Eclipse features. Additionally, CodeJams usually take place at interesting locations which you normally do not get access to.

There were three awesome SAP Experts Padmashree B, Sundaresan Krishnamurthy , Gopalakrishnan Ramachandran from SAP Labs Bangalore & Many thanks to them for their time & assistance..

In summary, we see the event as a complete success. Everyone learned something new and was able to get a glimpse into the very near future. Furthermore, developer meetings are a good means of building a network of our own; and last but not least, it was a lot of fun. Our thanks go to SAP and all of the participants, and we look forward to the next event.

The event was over-booked. We even had one participant who crossed the city from Bangalore (thanks for making the trip Pawan).

Humble Request ” If you are not attending after the registration let us know so that we can give space for others who are not registered.

To find out whats happening on SIT , Join our Linked Group : SAP Inside Track India Group

Facebook group SAP Inside Track India to connect and share among the local community members in India.

Thanks for the above blog.Do let us know about the next code Jam in Hyderabad as I am eager to attend after reading your blog.

very good going. I am from TCS Noida and now @hyderabad and will be here till 8th. I wish came could be organize at Noida center.  I wish you can contribute to make that happen. Would be a nice learning new technology for all ABAPers out in here too.

Yes Naveen , we are working on the same , Pls try to attend SAP Inside Track scheduled @ Noida coming July 26

Thanks for the link Mahesh. I have already registered as a volunteer for a helping hand. It would be my first event so I will do more of observation than anything. Hope to see you there 🙂

For Code Jam will contact Kumar soon if we can workout something.

One of the participants is Sundar from SAP (or erstwhile it may be )?

Yes but not as Participant he is SAP expert (ABAP on HANA Specialist).

He is presented session as well in the past SIT HYD 2014.

Ok Sundar happens to be an ex team mate from SAP. Nice to know he is a presenter.

A great day with so much information gained 🙂 🙂 🙂 .

Thanks Mahesh Kumar CV for organizing this event.