We have a Chinese version (SAP River (一)：SAP River概述) of this blog.

The most common architecture of SAP HANA application is like below(From SAP River Datasheet): 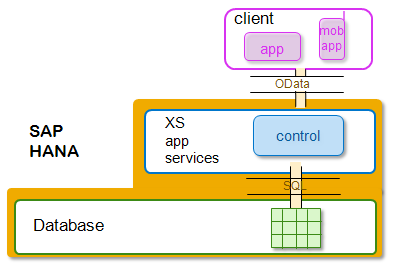 SAP River is a brand new method to develop SAP HANA application. SAP River consists of a programming language, a programming model and a suit of development tools. With help of SAP River, developer can concentrate on the design of business intent, ignoring how is it implemented and optimized in SAP HANA database.  SAP River only exists in design-time. When SAP River objects activated, all SAP River code is compiled into SQL Script or XSJS code and then transferred to XS engine indexserver for execution. 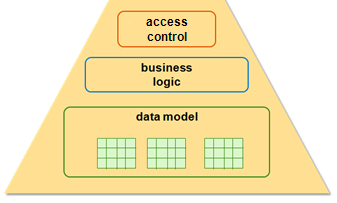 As a new generation of SAP HANA application development method, SAP River provides a strongly typed and declarative programing language. With this programming language, even a non-computer-major developer can also easily develop a SAP HANA application. In addition, SAP River also supports embedded SQL Script and XSJS code in SAP River program, which is useful for some complicated logic.

As a programming language, SAP River also provides some libraries, which contains many common functions. These libraries can be divided to some categories according to their functionality:

① when expose object in application level, you must use the keyword export to specify which objects are to be exposed to client. Such as Employee in TestSyntax here.

② There are more than one ways to expose SAP River object, OData is one of them. So it is necessary to add a notation “@OData” to declare the way of exposure. SAP River will create corresponding OData service for the application or namespace.

③ By Default, SAP River object is private. To let specified users to access certain object, you need to use the keyword “accessible by” to tell which role or privileges are required to access the object.  If every users are allowed to access, you can just use “accessible by sap.hana.All”.

How to learn SAP River

SAP HANA begin to support SAP River from SPS07, we have many materials to study SAP River. Here are some materials for studying SAP River:

In this blog, we talked about functionality of SAP River, advantage and structure, including the advantages of SAP River over traditional development framework, main features of SAP River and how to expose data to client via OData.

Hi, Daniel. Thanks a lot for your great work in SAP River Datasheet, it helps me a lot. Yes, it is great idea to add a link. As i plan to write a series of SAP River, this is just a part of it. Thanks a lot again for your help!!! 🙂

And sorry for forgetting to add reference for the two Figures, added already. 🙂

Interesting... Accidentally stumbled upon this while preparing for certification. Is it used anymore or superseded by CDS tech? Any idea who invented this?