This article looks at a very literal interpretation of gamification.  It shows what can happen if you attach a 3D game front-end to a business process system.  Details on how to install the client program are provided later if you want to try out the system for yourself.  There is also a more technical “making of” article with source code over on the HANA SCN section.

The front-end is a familiar “3D shooter” type game environment.  What is different is that the in-game objects are actually Purchase Orders from a SAP HANA back-end system.  Purchase Orders appear in the game as boxes which run around and can be hunted, analysed and then “shot” to either approve them or reject them in the back-end system.  There is a reporting element too, where 3D bar charts can be analysed in-game.  When was the last time you’ve actually climbed on your data?

Here is a video to give you a better idea of how it looks in action:

And here is a comparison of the objects as seen in the transaction system and the 3D client:

Gamification is usually aimed at taking gameplay ideas from games and implementing them in other software (the points system and badges in SCN being a good example of course).  Gamification is not usually about putting other software inside a game world.  This Proof of Concept shows how a 3D front-end can be fitted over an OLTP/OLAP system relative easily.  The back-end is SAP HANA, and SAP HANA comes with pre-configured demo content called SHINE (SAP HANA Interactive Education).  Part of that content is a Purchase Order processing system called Enterprise Procurement Management (EPM).

The behaviours of the POs in the game are all generated from the PO data itself.  The sizes of the PO boxes relate to the quantity of items inside, the colour tint on the cardboard boxes relate to the product category.  High value POs tend to move around more, whilst lower value POs are happy to sit statically, or stack into pyramids.

This project is not intended as something that would be used productively as it is, but more as a novelty that could generate other ideas.  For example:

If you want to try it out the game for yourself, it is very easy to do so if you’ve access to a HANA system, and only slightly less easy if you don’t (it is very easy to get one).  Head over to the HANA area in SCN and midway through the “Making of” article, you’ll see a section titled “How to Install and Play HANA SHINE 3D“.  All the details you need are there.

Lastly, a screenshot from the 3D world from a distance, showing PO boxes and bar charts: 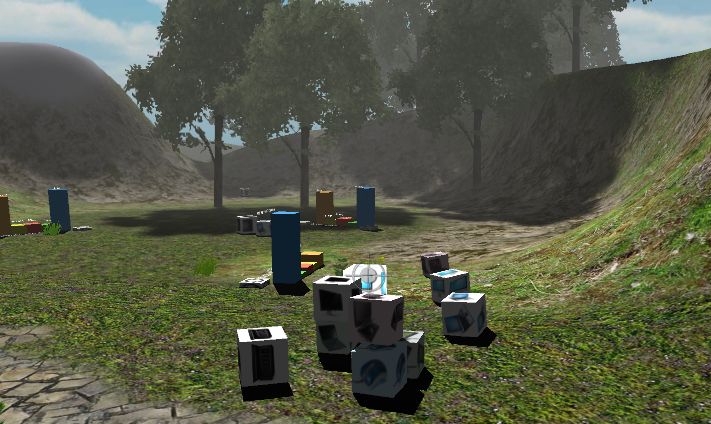 Hi Kevin, thanks so much for sharing this piece! It is definitely one of the most innovative applications for gamification of a business process I have seen so far. I have a few concerns and questions about it, though.

First of all, I'd love to know more about the user experience. How will someone get started and will users still have the option of staying in a "boring" environment? I have some niggling worry that some users will balk at the environment or find it too steep of a learning curve to jump in and just start using it.

Second, I'd definitely want to think about the practicality of the interface compared to doing things the "boring" way. Yes, no doubt it's cool but is it as efficient for me to get work done? How do I locate my P.O.'s? Are the icons as easy or easier to process than the typical visualizations I'd expect to see in my P.O. system?

Finally, I'd love to know more about app performance. Any time in the past when I've played in a 3D environment, I encountered plenty of server lag when things got busy. I'm assuming that if this system is based on HANA that may be addressed but would love to hear more about its robustness. Also, is this something I could use on my tablet or smartphone? That would definitely tip the scale in favor of the rich, interactive environment in my book since the practicality of getting work done with standard visualizations on those smaller screen devices would be balanced out.

These questions and concerns aside, I find this application of gamification to be extremely interesting and full of potential!

Hi Todd, thanks very much for the feedback, I'm glad this was interesting.

Your concerns are well founded!  If it were me approving the POs I am sure I would prefer the "boring" user interface.  Any gamification or "excitement" that got in the way of me getting my job done I would find more annoying than anything else, and I believe a lot of what this demo shows would be rightly regarded as "getting in the way".  So at present this is just a novelty.

Having said that, I believe that there is some mileage in a 3D game-like environment as a user interface, although quite where I do not know.  Perhaps doing unusual presentations that really need to stand out, or in some sort of collobration situations.

Performance wise, the client performs great for PO counts into the 100s on my laptop, but would struggle if 10,000 orders were running around bumping into each other in one place.  This is a limitation on the physics engine, but it does depend on the client it is running on.  The charts will perform very well always, even aggregating 100s of millions of rows is fine because HANA does all the hard work.

The communication with the server I never found to be a bottleneck. HANA uses oData which is fairly efficient in terms of bandwidth, the POs are streamed in one-by-one during play (asynchronously), so the gameplay is always very smooth.

Regarding platforms, the client was developed using a tool called Unity and the exact same code base can be used to build clients on pretty much any mainstream platform.  From the Wikipedia entry:

The code base linked to in the "making of" article can be used to make builds for Android and iOS, its just a case of changing the target platform.  Unity does the hard work for cross platform builds, it's just I didn't have the hardware to test them on.  Unity is a very robust product, though, very mature and stable.

Perhaps doing unusual presentations that really need to stand out, or in some sort of collaboration situations.

I can see some strong use cases for virtual walk-through's of physical locations (for, say, onboarding and orientation purposes). I am wondering if the P.O. environment pictured here might be improved by creating more of a sense of place than an outdoor 3rd person shooter environment. Perhaps have virtual rooms in a building set aside where a user could go to find and work with data blocks at different points in the approval process?

As a proof-of-concept, this application is awesome. I hope you don't take any of this as naysaying. I find what you're trying to do very forward-looking. Will you be doing a live demo of any of this at SAPPHIRE or elsewhere in the near future?

Yes I could see that working, making it more of journey, and more guided than a completely open landscape.  Thinking about traditional first- or third-person games, it is extremely rare for the worlds to be so open that the player can go anyhere they like, it is usual for the player to be guided in some way.

Thanks for the kind words, and no I don't see any of the feedback as naysaying at all.  No plans to demo this anywhere, although I'd welcome the opportunity, that could be fun!

I love what you've done here.

As you've used Unity, and it's compatible with Xbox / Wii / PS platforms, I presume it's then conceivable that the PO approval tasks could even be made more 'physical' by using sensors (like the Kinect etc.).

Perhaps a progress bar / countdown timer could be incorporated, as a persistent HUD element. It could illustrate how many POs are still to be approved and show how much time you have before your next meeting / end of working day etc.

Yes there is Kinect support in Unity, although I'm not sure how easy it is to get the distributions onto an Xbox One.  Xbox360 used to do an indie program where you could put your own builds from Visual Studio onto the 360 yourself..  I do not know if the Xbox One offers this yet.  Using Kinect through Windows would work though.

A countdown timer is a nice idea, would add a sense of urgency.  Then some global high score table could be added, although the approval being "right" would be just as important as it happening quickly, so ideally that could be measured and scored too.

very well done. 2009 we developed a 3D, SimCity-similar prototype for ERP processes in general. Also with Unity and BAPI integration on ECC. I always wondered how to visualize the pure number sheets like PO's. Excellent inspiration and thanks also for providing the source that I can hook that into my Unity and try it out. We should combines these two things

Hey Philipp, thanks glad you liked it.

That SimCity-ERP project sounds very interesting, I did not know such a thing existed.  Yes it might be fun to to combine the projects, I'd certainly be interested to explore that.

I'm new to SAP and found this niche in Gamification interesting.

Having a background in Gamification myself it was quite interesting to discover how the concept has been extended to the purchase cycle.

All in all it is quite intriguing, however I am a little skeptical how it will be received in the real world when the powers that be see an employee playing a game though in reality they are actually working.

Hi Ravi, yes it would look unusual, and you're right this whole shooter concept needs treated with plenty of healthly scepticism!

My view is that an "extreme" gamification application like a shooter-based approval system would need buy in from very high up in the organisation. Perhaps then the powers that be would be asking why aren't people playing the game 😉