While reading the SAP HANA Academy’s series analyzing the action from this year’s Indian Premier Twenty20 tournament you may have wonder just exactly how the insight-laden visualizations are created in SAP Lumira. In the demo video below, I use an online connection to SAP HANA to build a map, pie, area, and bar chart to preview tonight’s 2nd Qualifier between the Kings XI Punjab and the Chennai Super Kings. 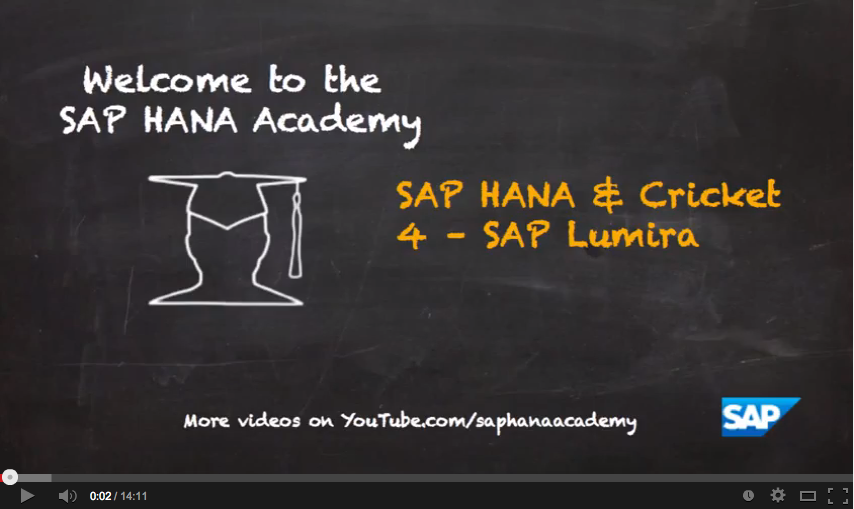 After being dismantled by the fierce KKR attack on Wednesday afternoon, the table topping Kings XI Punjab will get another crack at qualifying for the final when they clash with the Chennai Super Kings at Wankhede Stadium in Mumbai. Featuring two of the tournament’s three top run-getters, the tournament’s Purple Cap man, and a pair of seasoned Skippers, the 2nd Qualifier is anticipated to be an electrifying showdown between the top scoring clubs in this year’s tournament. The Super King’s attack must bring their A game as the Kings XI scored over 200 runs in both of their victories over Chennai earlier in the season. See how Punjab overhauled a 205 run target in Abu Dhabi and discover how the Kings XI gouged Chennai’s attack for 231 runs, the highest total this season, a few weeks ago in Cuttack. By processing ball by ball match data with the blazing speed of SAP HANA we can create insightful visualizations with SAP Lumira to preview tonight’s 2nd Qualifier.

With SAP Lumira we can quickly discover who were each team’s most proficient boundary hitting batsman by creating a 3D column chart of the number of fours and sixes each Super King and King XI batsman struck. Then using the ranking feature we can limit the chart to show only the top 10 batsmen with the most fours. Dwayne Smith leads the Super Kings’ lineup with 559 runs as the Barbadian all-rounder has struck 50 fours and mauled 34 maximums. Throughout the tournament Smith has formed great opening partnerships with both Brendon Mccullum and Faf du Plessis. The Kiwi and South African have each scored over 300 runs and struck over 25 fours. Chennai’s Skipper, MS Dhoni, has been fantastic at closing matches as he has been unbeaten in many innings and has struck 19 fours and smashed 17 sixes. The highest scoring team in the tournament, the Kings XI, have benefited from tremendous innings from David Miller, Virender Sehwag, and Skipper, George Bailey. All three have scored more than 250 runs and hit double digit fours and sixes. Sehwag has sent 42 shots to the rope. Glenn Maxwell has had a sensational season for Kings XI as he leads the team with 539 runs and leads the league with 35 sixes. 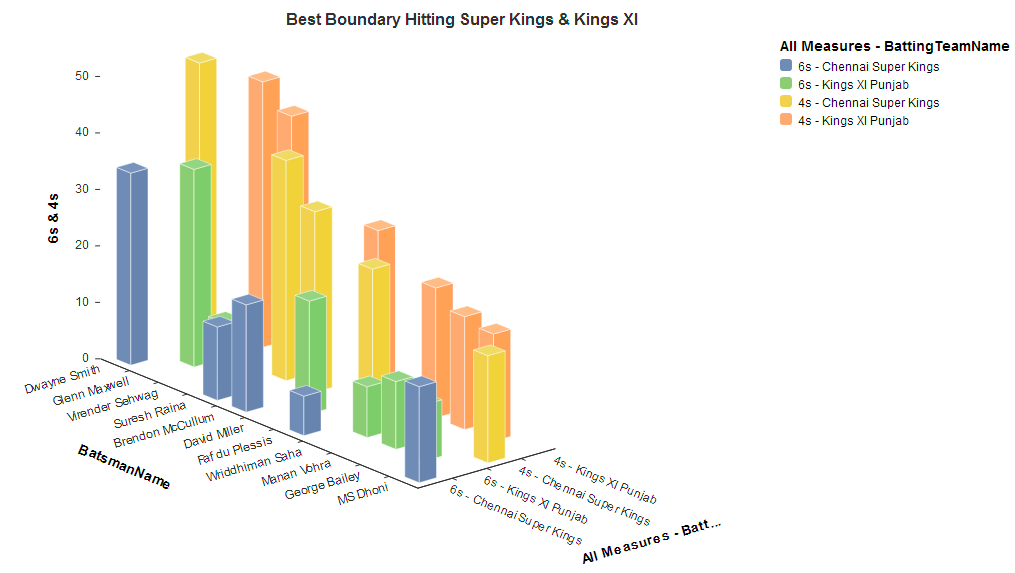 However, Maxwell has struggled lately, conceding the Orange Cap he wore for a majority of the tournament and bating without the same vim and vigor he displayed earlier in this season. By filtering on just Maxwell, switching to an area chart, changing the X-axis to match date and the measure to batsman runs we can transform out visualization to show Maxwell’s individual match performances throughout the 7th Indian Premier Twenty20 tournament. After scoring 95, 89, and 95 runs in his first three innings, Maxwell came back down to earth for a few matches until he notched another 90 runs against the Super Kings. This brought the total number of runs the Australian struck against Super Kings’ bowlers to 185. However, since May 7th Maxwell has struggled, failing to score another half century and posting totals of less than 10 runs, including a duck, in his last three innings.

By creating a regional Geographic hierarchy we can depicted the percentage of team wickets each individual Chennai and Punjab bowler has taken during the tournament with pie charts overlaid on Punjab and Tamil Nadu in a map of the Indian subcontinent. The Super Kings’ attack is led by the tournament’s current Purple Cap man, Mohit Sharma. Sharma has taken a league best 22 wickets, including a hat-trick in the eliminator match. Sharma’s 22 wickets, Ravindra Jadeja’s 19 wickets, and Ravichandran Ashwin’s 15 wickets account for nearly two-thirds of all of Chennai’s scalps. The Kings XI have taken the most wickets of any team in the tournament as their attack features a wealth of devastating scalpers. Sandeep Sharma, Akshar Patel, Mitchell Johnson, Rishi Dhawan, and Lakshmipathy Balaji all have taken 12 or more wickets this season, with Sharma’s 17 leading the way. 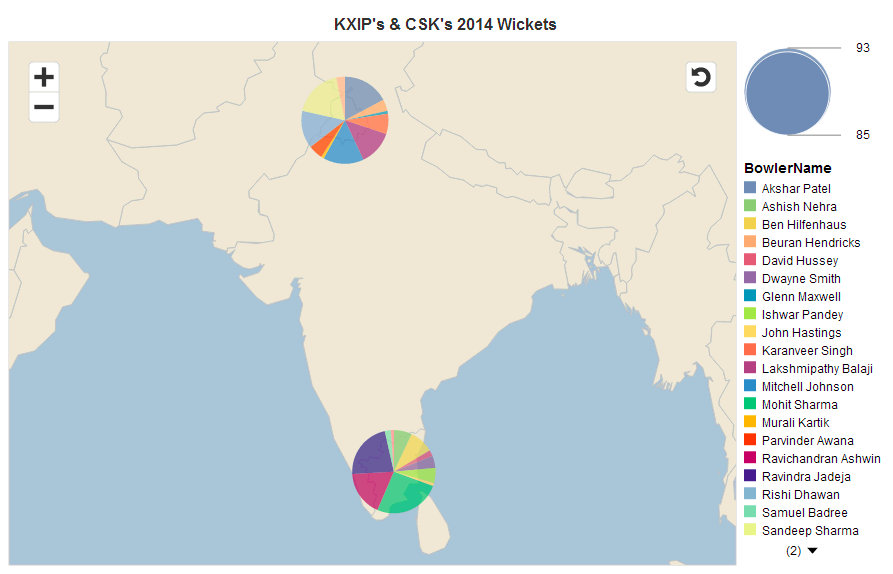 In SAP Lumira we can visualize the individual bowling efficiencies of each member of the Chennai’s and Punjab’s attack by creating a pair of pie charts that show the percentage of runs each bowlers has conceded and adding a depth of the number of balls, no ball, and wides they have delivered. While Sharma has taken the most wickets in the tournament, he has also conceded over 400 runs in the 49.5 overs he has bowled. The purple slice below belongs to Ashwin, who’s 7.03 economy is the best for any Chennai bowler who has delivered more than 15 overs worth of balls. In dark blue below is the Kings XI most efficient bowler, Akshar Patel. The southpaw spinner has conceded only 361 runs in the 58 overs he has bowled and his 6.22 economy rate is second best in the league for bowlers who regularly deliver for their teams. 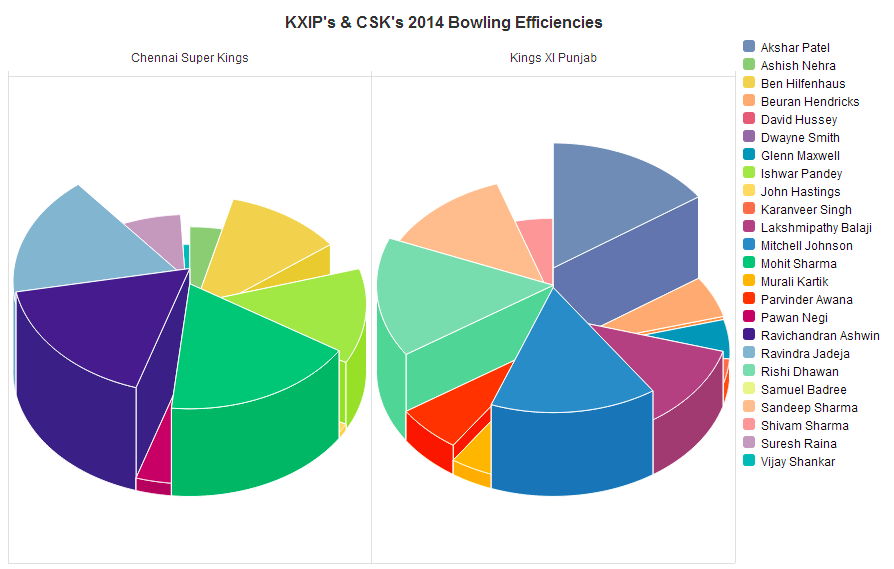 Can Maxwell find his earlier form against a foe he has twice decimated? Or will the Chennai Super Kings advance to their 5th straight final?

Just wanted to check , Did KKR use SAP HANA based system while bidding for their Team selection?

Now with KKR in the finals of IPL... felt SAP HANA helped KKR to get the best possible team?

You are correct. KKR used SAP HANA to analyze players during this season's auction. More info about the partnership can be found here:

Yes I certainly feel that SAP HANA helped contribute to KKR's success this season. As Orange Cap man, and the highest scoring Indian National ever in the tournament, Robin Uthappa, was signed in the auction. New addition, Chris Lynn, has also paid huge dividends as his spectacular match saving catch that robbed AB de Villiers of match evening maximum earned KKR a big win earlier in the UAE.

That would make for an excellent topic for a blog if KKR raise the golden cup on Sunday.