Beginning from the Grassroots: Health Care Data in Developing Countries

Beginning from the Grassroots: Health Care Data in developing countries

As a postgraduate student at Victoria University in my final semester, I thought I had already encountered my most profound and interesting of units. Little did I know that BCO6181 (ERP Applications) would be an instant game changer in my professional and indeed personal development. Presented by Tony De Thomasis and cameos by an impressive host of SAP juggernauts in different fields, the unit truly emerged as an inspiring and thought-provoking forum for all students.  In my time studying at Victoria University, I was extremely fortunate to have Ron Gottshalk from IBM as a mentor for a semester. His empowering tenor and incessant look for possibilities and what could be, propelled me to pursue my goal, al beit conceptual at that stage, of making a difference in the management and effective use of health care data in my home country of Zimbabwe.

This blog serves a dual-purpose: first, as part of our course assessment and also a platform to share a personal goal. It is about bringing to the fore the appalling state of health care data management in developing countries. It also discusses the health care innovations around this topic and indeed SAP’s involvement in this arena. The blog shall also utilize SAP Lumira to showcase interesting patterns in sample data from a developing country in order to make the point that these tools can be used to help those that are in dire need of them now.

The phenomenon of the Internet of Things(IoT) is rapidly taking centre stage and the health care sector is no different. With a predicted 26 billion devices being a part of the IoT by 2020(Gartner), the possibilities in the area of healthcare have already begun to be realized. In a recent Forbes article(2014), the IoT has been used in the development of devices such as baby monitors that relay real time information to parents’ smartphones, insulin injection trackers that help diabetics manage their lives better and ingestible sensors in tablets to assess medication uptake.

A snippet of what SAP is doing ?

At the recent World Health Summit held in Berlin late last year, Prof Hasso Plattner showcased how SAP are utilizing SAP HANA and  its remarkable in memory technology to make a major difference in the healthcare sector. Through the utilization of SAP HANA for healthcare platform, SAP has managed to make significant differences in personalizing treatments for patients based on real time and accurate data access. A great deal of work is also being done in genomics, where sequencing of genomes in order to map a patient’s particular cancer strain and then utilizing it as a part of actionable clinical data.

The technology  has the ability to integrate different types of information from different sources. For example, combining biological data , data gathered by the health professionals(clinical) and the day-to-day activities of patients (lifestyle data) , an immense amount of analysis power can be harnessed by the use of SAP HANA as the backbone. In a demonstration presented at the 2014 HMISS(Health Information Management Systems Society) conference, SAP launched the ‘Medical Insights’ project that is aimed at bringing about better outcomes and diagnoses for patients. The technology extracts and analyses patient cancer data from various sources like  clinical information systems, tumor registries, bio bank systems and documents like a doctor’s notes and patient diary recordings. 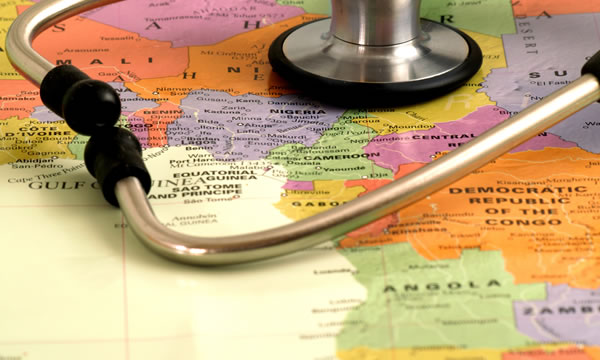 The poor state of health care in developing countries is quite devastating. Taking Zimbabwe, for example, where more that 69% of the population live in rural areas(World Bank,2013), health care services are extremely stretched and inadequate. The work undertaken by Non Governmental Organizations(NGOs) such as the World Health Organization (WHO) and the United Nations(UN) cannot be understated. A lot of work in data collection and management has been undertaken with publication of  yearly reports. This process has been hampered by the lack of up to date data in vital statistics of health care. According to a report by WHO(2013), data collected by governmental bodies lacks accuracy due to infrastructure and human resource issues and there is limited co-ordination in the collation of data, therefore duplicating efforts and adding more inconsistencies to national data collected.

The parameters and dimensions utilized in data mapping by various stakeholders in the country are conflicting , non-uniform and sometimes non-existent, thus necessitating policy makers and NGOs in any statistical and analytical work to utilize rough estimates in rapid provisional studies. Furthermore, registrations of births and deaths , collection and cataloging of biological specimen takes too long while a vast chunk of data is unavailable to analyze due to the constant movement of people in search of greener pastures in the country and beyond Zimbabwe’s boarders. The government , through, public and community based health care workers have made initiatives in data collection since independence in 1980. The problem lies in the lack of awareness ad training in the importance of collecting high quality data and also cultural insecurities as far as full disclosure is concerned from perceived intrusive questioning.

The management of health care data is decentralized , with public hospitals, private practices and pharmaceutical services managing their own clinical data for patients.

The end result for a typical case scenario would go as follows:

A  patient in a rural area, who has no family physician, falls terribly ill which necessitates relatives to take the patient to the nearest urban center for urgent medical treatment. Upon waiting for hours to see a doctor, the patient is examined and if need be ,admitted into hospital. The physician has little or no information regarding the patient’s medical history, prior visits to other hospital physicians, allergies to medication, prior diagnoses or family history. The best source of information is relegated to community services data and the  patient’s family ;at best. The favorable outcome of this patient is instantly diminished.

By having effective data management measures, diseases that have ravaged nations could be combated. For example, having accurate information about the various species of mosquito and strain of malaria depending on demographics could make effective the fight against the disease.

The value of data is in its application and not just its collection. Using SAP Lumira, some visualizations have been developed from segment data sets obtained from the World Health Organization from various years, to get a better picture of the issues in health care in Zimbabwe. 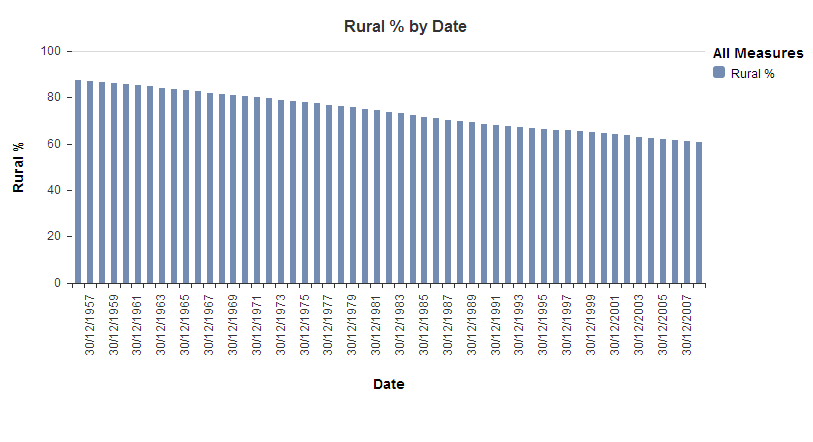 This visual depicts the percentage of the national population that is in the rural areas by date. The vast majority of the population is still in the rural areas and the number keeps steadily decreasing ,asthe life expectancy shortens and the youth move to urban centers to look for employment and better opportunities.

Here we can see that the uptake of internet use per 100 people has steadily increased but the use of mobile phones has almost a 100% usage rate. Internet services are still beyond the reach of many and poor internet infrastructure is compounding the issue. This may be to do with the cultural change where most older folk in the rural areas previously reluctant to use mobile phones have changed their perspective. This also creates an enormous amount of big data which could be managed and used effectively to better the lives of the poor and vulnerable . 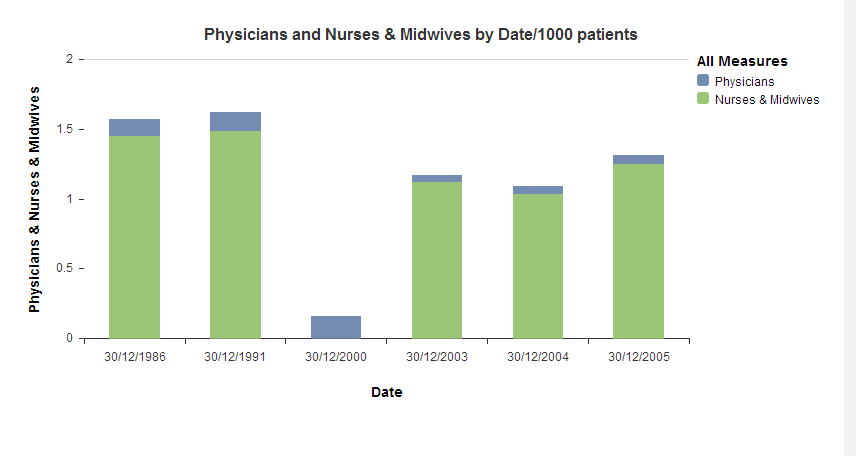 This visual shows the alarming ratio of health physicians to patients in the country. The country has suffered from the devastating ‘brain drain’, that has seen most professionals seek employment beyond the boarders.

SAP has been playing its part in the poor nations in healthcare issues. In an article in sap business trends(2014), SAP’s Health Central Solution in conjunction with the National Rural Health Mission in India has been involved in a data collection process for preschool children using SAP HANA to derive interesting patterns and actionable data. Utilizing the cloud approach, health care professionals and patients are able to access records that at this stage are projected to cater for 270 million children.

As a matter of reflection, this gloomy thought kept resonating with me:

“ Technology and innovation have but one shortfall;

those that do not possess the means to harness

their brilliance are left in their wake”

I sincerely hope this statement is negated in the future. The answer is in the grassroots. The time is now and through collaboration of private and public health sectors with Non Governmental Organizations, policy makers and IT sector, grassroots projects should be embarked on where data is collected and effectively stored for further analysis. The most important aspect that will better the quality of life is quality information, which in this day and age should be, in my opinion, a basic right for every one.  The future development and health of the country depends on it. The positive aspect for developing countries is that the world is becoming a ‘cloudier’ place and with the extensive mobile phone use in the country, the processing of this data , say using SAP HANA in the cloud ,a great deal of groundwork can be covered.

Very well documented and thank you for sharing.  Good luck to you in your future