UI5 Inspiration Gallery – Would it be useful?

As part of some pre-sales and design effort I was involved with last year at a customer, I spent a bit of time using the D3.js – Data-Driven Documents website for inspiration, more specifically the Examples (Gallery · mbostock/d3 Wiki · GitHub) section of their website.  At the time, we weren’t at the stage of needing clear functional or technical definitions for the future solution (a suite of Portal type app’s based on UI5 for aesthetics and usability) but we were starting to build up lots of mock-up screens (using Balsamiq, which was my tool of choice at the time.)  Essentially, we were in design & exploration mode, trying to determine the boundaries of what we could do and how it would look – we would worry about actually implementing it and making it work later… 😉 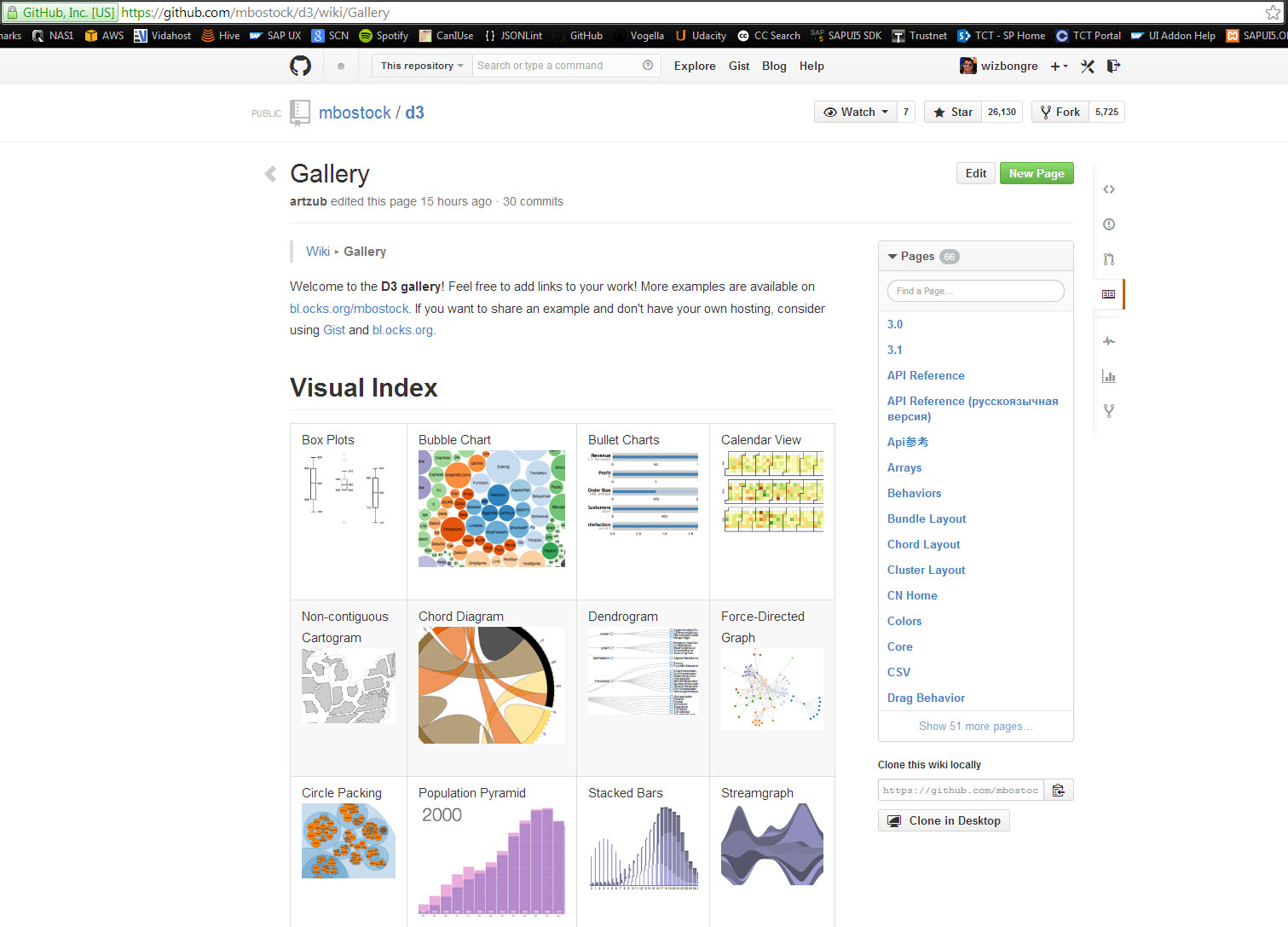 Now, I hold my hands up that I’m not a designer – I am a developer.  I acknowledge that there are those amongst us who are pretty proficient at covering both roles.  I however follow the form follows function school of thought and hence accept that I may not always produce the most aesthetically pleasing of designs.  For this particular engagement, we didn’t have a dedicated “designer” (and I suspect, based on experience, this is often the situation with SAP web/mobile engagements.)  So, as mentioned above, when it came to elements of the visual content for some of the app’s we started to use the D3 example content as inspiration – basically, I assume, using their site as the creators intended.

Fast forward to today and I have just spotted a brief exchange on Twitter, where some of the Australian SAP guys (John Moy, Chris Paine & Jason Scott) were briefly discussing “nice” examples of UI.  By nice, I mean those examples that are aesthetically pleasing in a complex, feature-rich kind of way; the sort of stuff that makes you go “wow, is all that done in UI5?  I thought that just did tiles and lists…”  Here’s a link to the conversation on Twitter so you can see for yourself – check out the picture Chris shared and hopefully you’ll see what I mean. 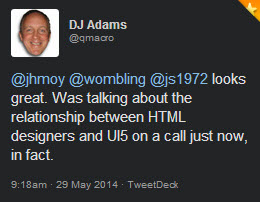 All of this got me thinking, especially when DJ Adams followed up with this tweet.  I wonder if there is something we can do to help the UI5 (and probably wider) community with regards to design inspiration?  Should we setup a section in the SCN wiki or better yet a separate website, that is purely used for people to share their UI5 efforts.  I’m not talking about code based solutions – we already have Git and JSBin for that – I mean pure design look & feel.  Just a way for people to share screenshots or maybe even short video clips, similar to the shot Chris shared on Twitter, to act as a library of UI5 inspiration.  Maybe it could have a “I want a UI5 app that looks like this” (with associated image) section and then some clever people could share code snippets via Git/JSBin to help deliver the desired outcome.

All thoughts welcome, especially those that tell me to stop having random thoughts… 🙂

Well, it looks like someone, somewhere was paying at least some attention to my post and the general sentiment.  The Splash tool from SAP (part of the Splash -> Build -> WebIDE UX approach that was recently announced) has a pretty good gallery section SplashApp.  It’s early days yet and there is limited content, however I’m hoping over time this becomes the default place to go for some inspiration on just what can be done with UI5.

I’m sure many of you will have already seen it but I wanted to tie up the loose end and connect this post with the new gallery.