Before joining the SAP Innovation Center in Potsdam two years ago, I spent five years doing research in microbiology at Harvard Medical School – growing soil bacteria, modeling their ecology, and comparing their genomes. To an outsider, it might have looked like I was leaving the world of biology behind for good by moving to a software company. But in fact, one of my first projects at SAP focused on a major biomedical challenge: improving cancer treatment.

Cancer is not only a devastating disease, it is also a very complex one. Though it is always caused by changes in the DNA of individual cells (mutations), the exact pattern of genetic modifications varies from case to case and even changes as the disease progresses. So even tumors of the same kind can be fundamentally different – and hence, so can the best treatment.

This makes cancer a key target of personalized medicine, i.e. therapies that take into account the characteristics of the individual patient and their specific form of the disease. But if every cancer is unique, basing the treatment of an individual on experience from supposedly similar patients could mean that doctors might miss crucial differences. So how can we ever hope to truly personalize cancer treatment? 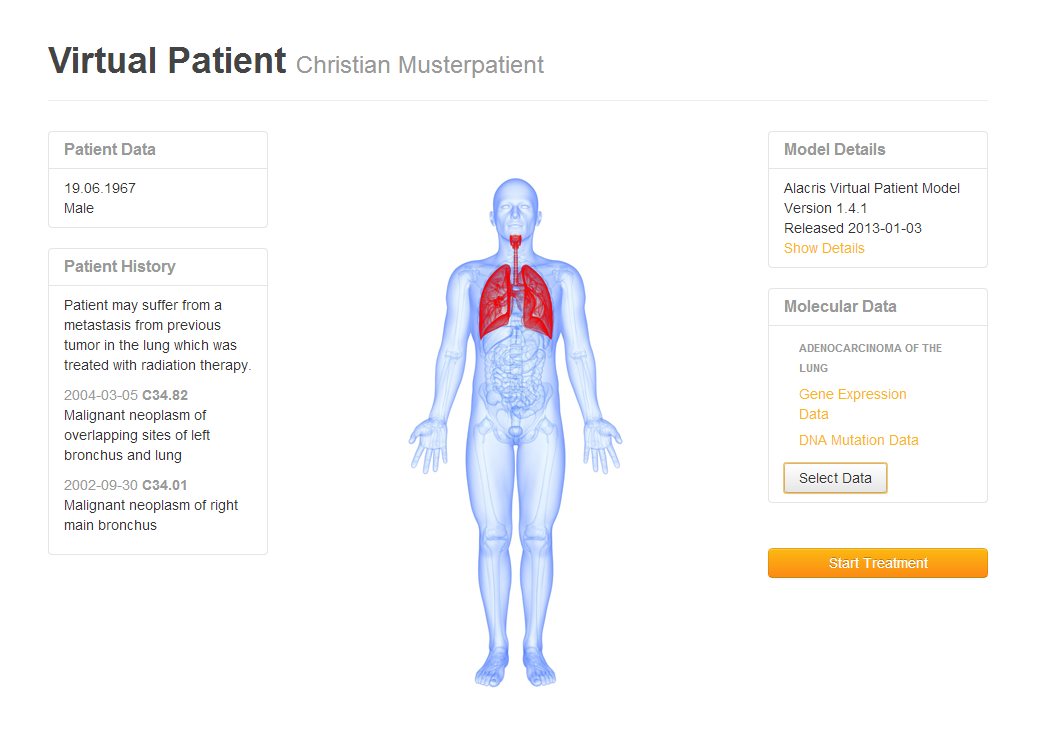 A screenshot from the SAP Virtual Patient Platform proof-of-concept, showing how the virtual patient model could be integrated with other medical information.

One radical answer to this question has been proposed by Prof. Hans Lehrach and his research group at the Max Planck Institute for Molecular Genetic in Berlin, together with the biotech start-up Alacris Theranostics: replace the group of presumably similar patients with of a group of virtual patients. These virtual patients are computer models that describe the exact cancer of a specific, real patient, and they can therefore be used to search for the best treatment for exactly him or her.

The idea of using computer simulations to replace difficult or expensive procedures is not new – engineers have used computers to simulate car crashes since the 1980s.  However, understanding (and hence simulating) the bending of metal is much easier than understanding human biology.  Every cell in our bodies is a complex replicating entity, guided by the vast information stored in the human genome (which was not even completely mapped until 2003).

But decades of painstaking research have helped scientists build a picture of how genes, proteins, and other molecules interact inside cells. In the past decade,  biologists have joined forces with computer scientists, mathematicians and physicists in the field of systems biology to deepen their understanding of how all these pieces come together to form living cells. One result of this endeavor has been ever-improving mathematical models of how healthy and cancerous cells function. These models do not yet offer anything like the predictive power of Newton’s laws of mechanics, but they do make simulating cancer on a computer – and so the virtual cancer patient – a real possibility

This is where Alacris enters. They use molecular data taken from the patient (e.g. the mutations in the tumor cells) to adjust their carefully constructed mathematical model of cells so that it captures the behavior of exactly this tumor. They then use the model to simulate the effectiveness of a large range of available drug treatments and so help doctors identify the optimal treatment for this exact individual.

But now a major biological challenge suddenly becomes a major IT challenge, requiring intense number-crunching and producing gigabytes of data for each patient. The mathematical model that Alacris has built contains thousands variables representing different genes and proteins, and a similarly large number of parameters values are needed to capture the details of the individual tumor. To ensure reliable results, this huge model must furthermore be solved hundreds or even thousands of times for every dose of every drug that we want to test. Fortunately, this kind of problem was a great fit for us at the SAP Innovation Center, on the lookout for new big data challenges to tackle with SAP HANA and other technologies (plus we’re only short train-ride from Alacris’ offices in Berlin). In 2012 we joined forces in a proof-of-concept project, a project that I also got the chance to join.

Making it possible to use virtual patients on a large scale presented us with several, very different IT challenges: How can we make the simulations faster? How do we deal with the massive amount of output data? What could be an intuitive way for doctors to interact with the complicated model behind the scenes?

Fortunately, my colleague Valentin Flunkert had spent his PhD solving mathematical models similar to the ones used by Alacris. Using this experience, he crafted an equation solver that sped up the simulations by an amazing factor of roughly 5000. Suddenly, simulations that would have previously taken weeks could now be run in hours! But faster simulations of course mean more data produced per day. So for our proof-of-concept system, we directly loaded the simulation results into HANA, making it available for immediate analysis like viewing averages and uncertainties for the relevant outputs. Finally, we made a web-based UI to show what an interface for doctors might look like (see picture).  It was an interesting challenge because we had to represent the underlying abstract mathematics using normal medical concepts and present the results in a way that still allows doctors to bring in their own expertise when evaluating the results. Based on this work, Alacris recently decided to buy SAP HANA.

The virtual patient approach has already been successfully applied to a small number of patients, but it still has a long way to go before it can become a standard part of cancer care. Like any other new drug or medical device, it will have to pass stringent clinical tests and careful comparisons with experimental data to ensure correct and reliable results, a task Alacris is currently very actively pursuing. But already now, SAP technology is helping accelerate the process: we cannot make cancer a less complex disease, but hopefully we can contribute to making it less devastating.

You can read more about this project on the Innovation Center website and watch this short video on our YouTube channel.