As the Definition states, main purpose of regression testing is to test and confirm that the changes that are being introduced to the code does not in any way affect the existing functionality of the application. 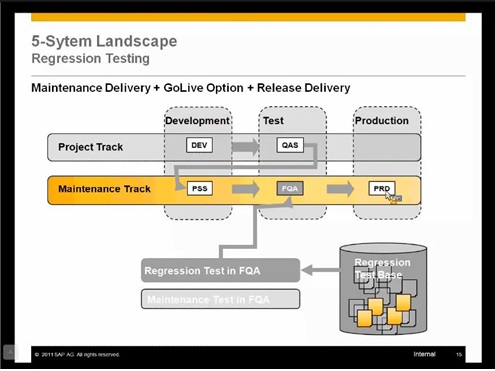 Diagram above explains how regression testing is carried out in a typical situation across all SAP Projects.

Regression Testing comes into focus due to either of the following circumstances:-

In both the cases it is the responsibility of the tester to make sure that the changed code works fine and also the induction of the new code does not affect the existing functionalities of the application.

Identification of test cases that form the regression test suite, Is a very important task that determines the success of the project.

So a balance has to be found between both the extremes to select the appropriate amount of test cases for regression testing.

Change due to Bug Fix:-

Change due to Addition of new functionality:-

By a thumb rule, Regression Testing might and not always default to 10% of the overall Testing Effort in any given project

The fact that Regression Test is the one last chance for us to catch the bug before the application go live, makes regression testing even more important.  Proper understanding of the need for regression testing and due diligence in the identification of regression test cases would go a long way in determining the success of the project.