The week of May 12th was a whirlwind of government relations activity and I was fortunate enough to organize and be a part of it all!

On Tuesday, May 13 SAP in Silicon Valley hosted Congressman Eric Swalwell at our Dublin, CA office for an employee town hall. The following day I traveled to Sacramento to visit over 60 state legislators in coordination with one of SAP’s strategic partners, Silicon Valley Leadership Group for their annual Sacramento advocacy trip.

The meetings with Congressman Swalwell were a huge success. By way of background, Congressman Swalwell is the youngest member of Congress from the California Delegation and sits on several influential Congressional committees including the Committee on Science, Space and Technology. He represents the 15th Congressional District which includes Dublin, Pleasanton, San Ramon, Livermore, Hayward and Union City. 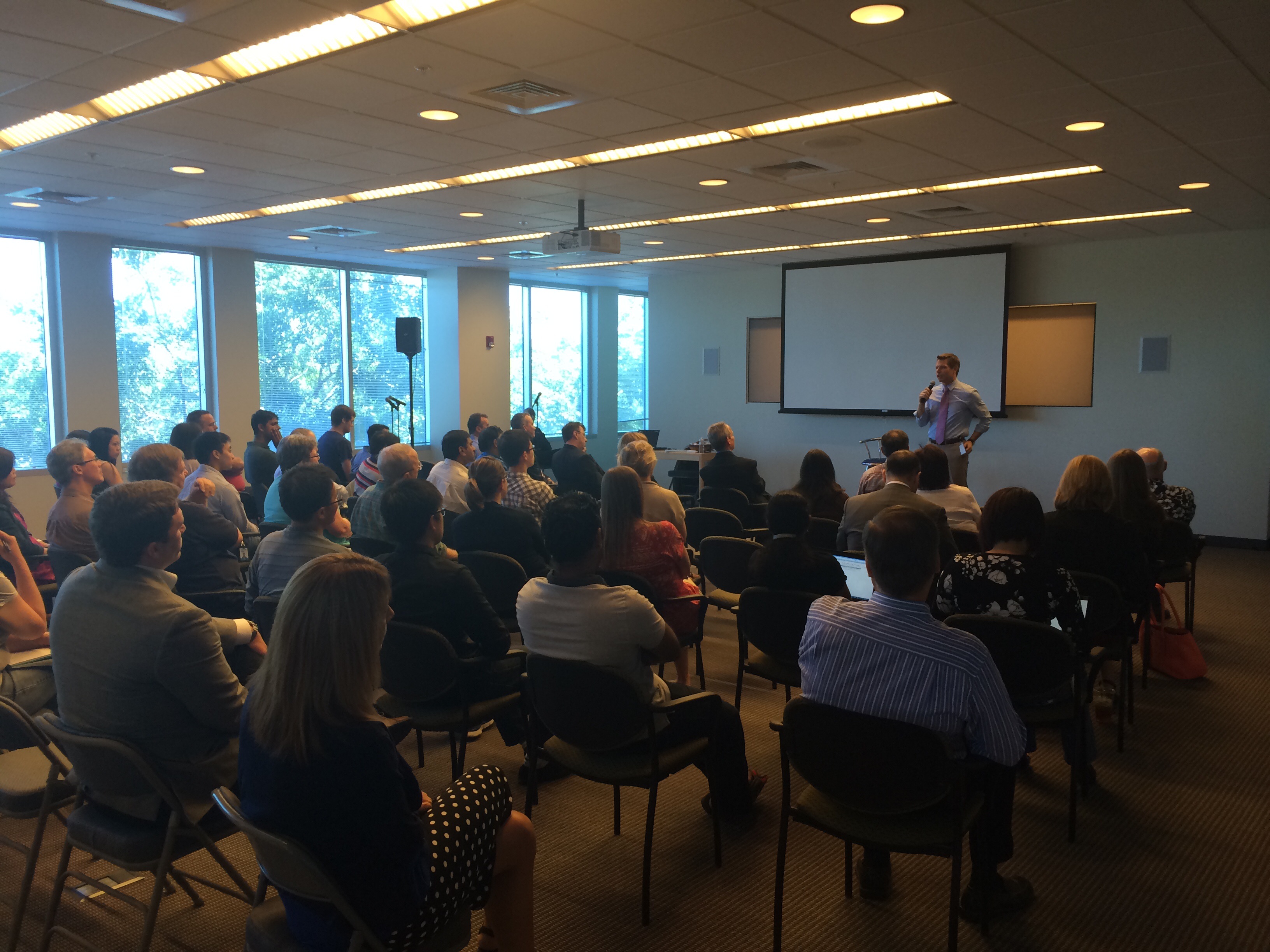 We started the visit with an employee town hall and over 60 employees spent an hour with the Congressman discussing regional issues like workforce development, access to quality and affordable education, and regional tech issues like the changing pace of cloud regulation and policies. It was great to see our employees enthusiastic and excited to engage with an elected official from their area. The Congressman also seemed to enjoy the conversation with his constituents.  A win-win in my book.

We ended our visit with an executive briefing lead by Richard Pledereder, Head of HANA Platform – Data Management Unit. This meeting was a deep dive into SAP’s business models, our innovations and SAP’s regional impact in the Dublin area. SAP is the largest employer in Dublin. We stressed SAP as the cloud company powered by SAP HANA, the mobile developments that occur on the Dublin campus and what SAP has done regionally for the community through our CSR work.

For the policy piece we discussed the need for cybersecurity and data protection governance that stay current and do not stifle innovation. We also talked about the need for comprehensive immigration reform. Spoiler alert – immigration reform is not going to happen, at least not in this or the next Congressional term (my opinion). 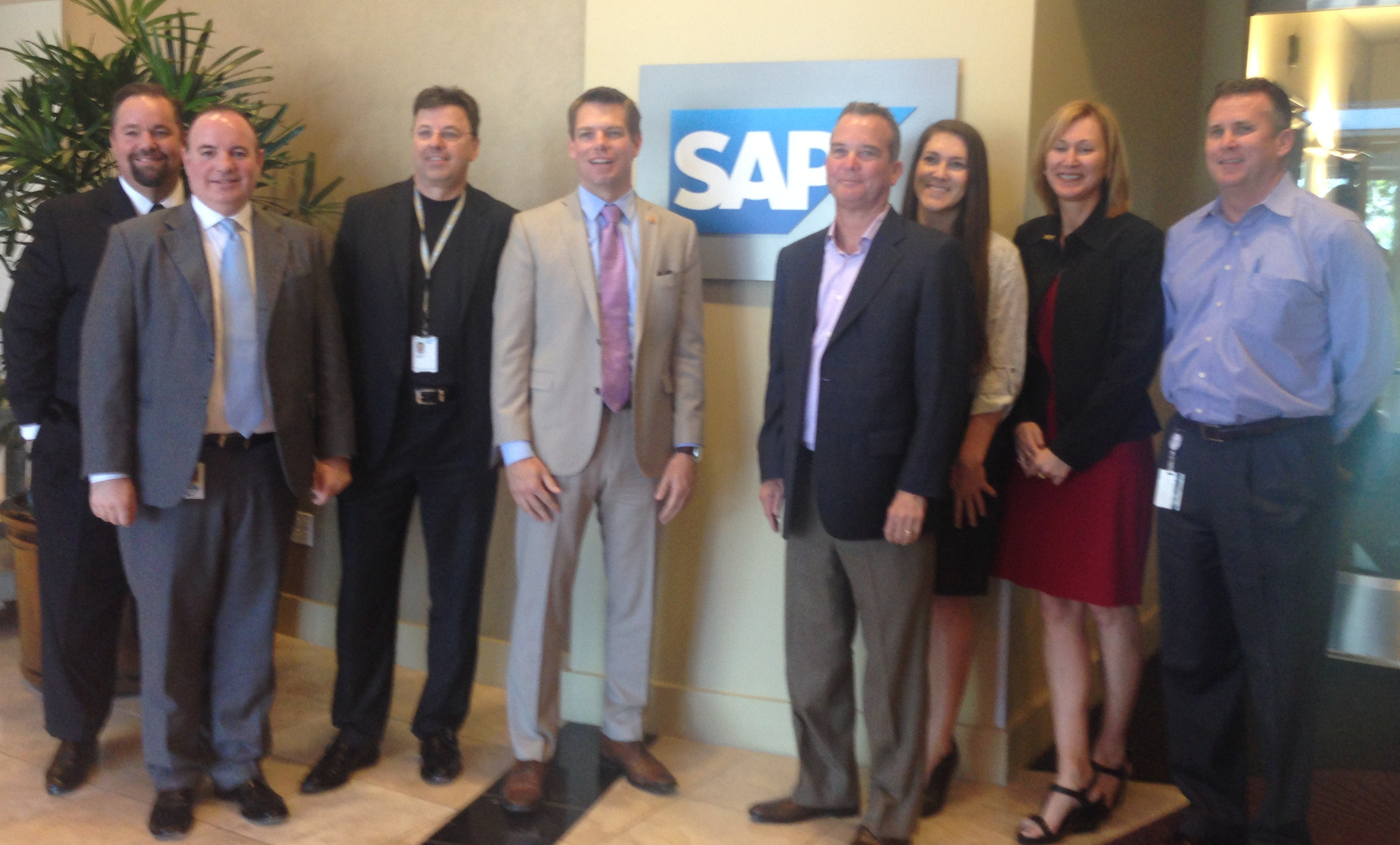 At the end of our visit, the Congressman left the building with a better understanding and appreciation for SAP, who we are, and what we do.  Exactly what we wanted.

The morning of the 14th I headed up to our state’s capitol for a day of meetings with state legislators and company executives. My colleagues from the tech community and I represented over 40 technology companies (Apple, Microsoft, Applied Materials, and Synopsys, to name a few) and met with over 60 state assembly and senate members from both parties.

We were advocating for SVLG’s state policy priorities which included Senate President Pro Tem Darrell Steinberg’s (D-6-Sacramento) early childhood  education bill, the upcoming water bond, CEQA modernization, R&D tax credit, the use of Cap & Trade monies and non-profit hospital charity care programs. All of these issues impact members of the Silicon Valley Leadership Group and tech companies that work and do business in the Silicon Valley.

Our morning began with a meeting with members of the Women’s Legislative Caucus chaired by Assemblywoman Bonnie Lowenthal (D-70-Long Beach). She was joined by her vice chair Senator Hannah-Beth Jackson (D-19-Santa Barbara), Assemblywoman Joan Buchanan (D-16-Dublin) and Assemblywoman Kristin Olsen (R-12-Modesto). They discussed the need for more women to sit on the boards of tech companies and to increase womens’ access to affordable and quality child care. Childhood education was also a key issue for the caucus and these legislators were able to give us some insights into Sen. Steinberg’s bill. According to them, the bill was going to die in committee. This was to be a theme that we heard throughout the day.

The members of the Women’s Caucus left quickly for other meetings and we were joined by Senate Pro Tem Darrell Steinberg. I found it a bit amusing that he was speaking to us about his early childhood education bill, that we knew was not progressing through the legislative process.  According to the Senator, his bill was not dead yet, it was going to be a tough battle, but he was optimistic that a version would pass through committee. Talk about spin. He then changed subjects to the ever important water bond measure. At the time, there were several versions out and he was not sure which one would prevail. Senator Steinberg is aligned with the SVLG on this issue and supports the water bond and agreed that something needs to be done to combat the drought.

The jammed packed day did not stop here; we were soon joined by 13 members of the Silicon Valley Caucus to discuss higher education and the need for a talented work force. It should come by no surprise that members of this caucus represent Silicon Valley and play a key role in making sure that legislation that passes through the legislature does not combat innovation or hurt businesses in the Silicon Valley. Higher education is a key issue for the Leadership
Group and the tech community. The discussion revolved around access, and a steady funding stream to our CSU and UC systems. We also discussed Steinberg’s bill. They too agreed the bill was dead. After the caucus meetings, we broke into small groups and visited directly with assemblymembers and senators. My group included representatives from Apple, Johnson & Johnson, the Mayor of Morgan Hill and the founder a startup called iLobby. We met with Assemblyman Jeff Gorrell (R-44-Thousand Oaks) and Assemblyman Brian Maienschein (R-77-San Diego). In these meetings we chatted about CEQA modernization and the water bond. The Assemblymen did not have any insights into Steinberg’s bill, but were the first to say that there were other more affordable alternatives being developed in the Assembly.  The meetings were substantive, engaging, and it was great to share with these leaders insights into SAP, our presence in the state and our impact to the economy.

Our local government relations work is far from over. We are continually meeting with local, state and federal officials to educate them on SAP’s business model, our innovations and impact in the region.

Stay tuned foradditional posting on future visits from these influential leaders and an update on my upcoming Washington DC Advocacy Trip with the Silicon Valley Leadership Group.