After reading up on all of the insights from the Indian Premier Twenty20 tournament we can derive from visualizations created with SAP BI tools you may be wondering how we can access the Cricket data with SAP Lumira and SAP Crystal Reports. In the video below, Tahir Hussain Babar (a.k.a Bob) showcases the Analytic View he has built in SAP HANA Studio to expose the XML Cricket data (that he loaded into SAP HANA using SAP Data Services) to BI tools, such as SAP Lumira and SAP Crystal Reports.

The video starts with a recap on the XML files we receive from Opta are structured, and then shows how the SAP Data Services job is executed. When the SAP Data Services job has finished for a specific game, that game’s cricket data is stored in a columnar table and each day, after the recently concluded match’s data has been loaded, the new data is then placed into a consolidated table that also stores two years worth of historical data alongside data from this year’s tournament.

Further in the video, Bob profiles the different sections of the Analytic View. The “data foundation” section of the analytic view shows the various columnar dimensions and fact tables that are selected and then joined together. Specific columns from the original cricket table are then selected to be part of the Analytic View.

The “logical join” section of the Analytic View shows a 0NF version of the view. Here, calculated columns can be created and added to enrich, and even cleanse, the data. For example, Bob shows how users can easily create calculated columns such as when fours and sixes are struck by batsman by using if-then-else statements.

Lastly, in the “semantics” section, we can modify the output name and aggregation type of each metric to change how the end user sees the data columns within the BI tool. Additionally, within the semantic view, a user can hide or show different dimensions and measures. Lastly, Bob shows the “data preview” panel which enables users to profile the data by simply dragging and dropping metics to create analytics, such as Tag Clouds.

Watch the video for even more insights on how our Cricket Analytic View is built in SAP HANA Studio. 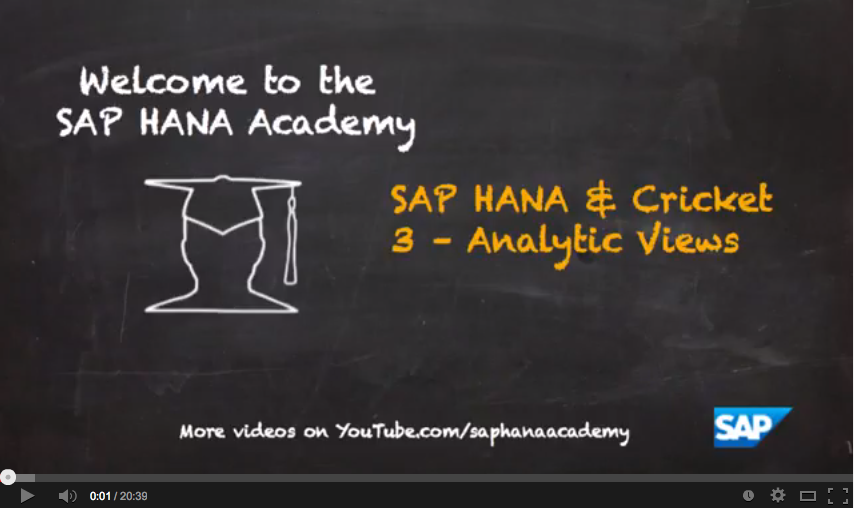 Once our data has been loaded into SAP HANA we can preview this afternoon’s first qualifier match between the tournament’s best two teams, the Kings XI Punjab and the Kolkata Knight Riders, by creating insight-laden visualizations with SAP Lumira and SAP Crystal Reports. With the tournament’s best record, the league’s highest scoring team, the Kings XI Punjab, will travel to Eden Garden to face the home town and red-hot Knight Riders with a berth in the Championship match on the line. After opening their campaign with a 2-5 record, the Knight Riders have reeled off seven straight wins by riding the superb deliveries of Purple Capped Sunil Narine, and the powerful strikes of Orange Capped Robin Uthappa. Discover how Punjab shot out KKR in a 23 run victory earlier in the UAE and find out how the Knight Riders evened the season series with a massive nine wicket win in Cuttack.

With a few simple clicks in SAP Lumira’s intuitive interface with can create a 3D bar chart that shows the number of fours and sixes each Kings XI and Knight Rider batsman struck during the knockout stage of the tournament. The green bar towering over the rest in the middle of the chart belongs to the tournament’s highest run-getter, KKR’s Robin Uthappa. Uthappa’s 69 fours are 23 more than the next highest total in the tournament, the 46 fours of Kings XI’s Glenn Maxwell.  While Maxwell’s 35 maximums (the tall yellow bar below) leads all batsmen in the tournament, the Australian recently relinquished the Orange Cap he wore for most of the season as he has posted dismal scores of 14, 2, and zero, in his last three innings. However, with such a potent lineup that features David Miller and Virender Sehwag, the Kings XI are always a threat to spray a bevy of boundaries across the pitch.

Using SAP Lumira we can profile the individual match performances of the Knight Riders spectacular spin bowler, Sunil Narine. The Trinidadian has taken a tournament high 20 wickets and has posted an impressive economy of 5.91, while being the only bowler to deliver the maximum amount of possible balls allowed this season.  By changing the legend color to boundary we can slice the bars to quickly see what percentage of the runs Narine has conceded have come from boundary shots. Non boundary shots account for a majority of the runs Narine has conceded and in one of his 11 games in which he conceded less than 25 runs, Narine didn’t give up a single boundary. Nairne had one of his worst outings of the tournament against the Kings XI on May 11th as he conceded 30 runs with 14 resulting from a six and two fours.

With SAP Crystal Reports we can create a graphic that compares the economies of Kolkata’s best bowler, Narine, and the strike-rates of Punjab’s best batsman, Maxwell, broken down by different combinations of the lines and lengths of balls they have delivered and faced. Narine’s half volley deliveries have been pummeled by his opponents and he should certainly avoid tossing those against Maxwell as the Australian all-rounder has strike-rates north of 233 against half volleys. If Narine hopes to continue Maxwell’s recent batting woes he could possibly look to exploit Maxwell’s relative ineffectiveness against outside off stump back of length and length balls. 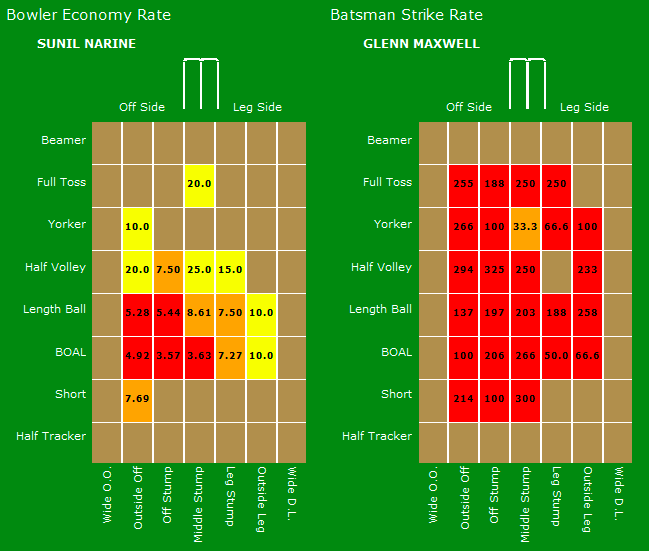