Massimo Vignelli taught me how to ride the NYC Subway, though I didn’t know it at the time. I came to New York in 1974 to study art at The Cooper Union, a kid from the suburbs of Cleveland, new to the hostile and gritty city. While the subway was dark, intimidating and at times threatening, it was something you would have to master to survive. But that task was not particularly intimidating. There was clean, clear signage to orient you in the stations, bold color circles denoting the lettered train lines and the ubiquitous map in every train. You could pick up a paper map at any token booth as well. The signage was smart and Swiss, Helvetica ruled, as it still does today, 40 years later. It has withstood the test of time.

Alas, the map was replaced in 1979. The Vignelli design subway map is a modernist masterpiece. Everything is oriented on a horizontal, vertical or diagonal axis. Vignelli referred to it as a diagram, not a map. Geography was stylized; train lines did not curve, except for rounded corners. Colors were reserved for the subway lines themselves, water wasn’t blue, and Central Park wasn’t green. All these niceties were irrelevant to the task at hand, the color of grass or water wouldn’t help you navigate through the system. Architecture critic Paul Goldberger, called the original Vignelli design “more than beautiful.” 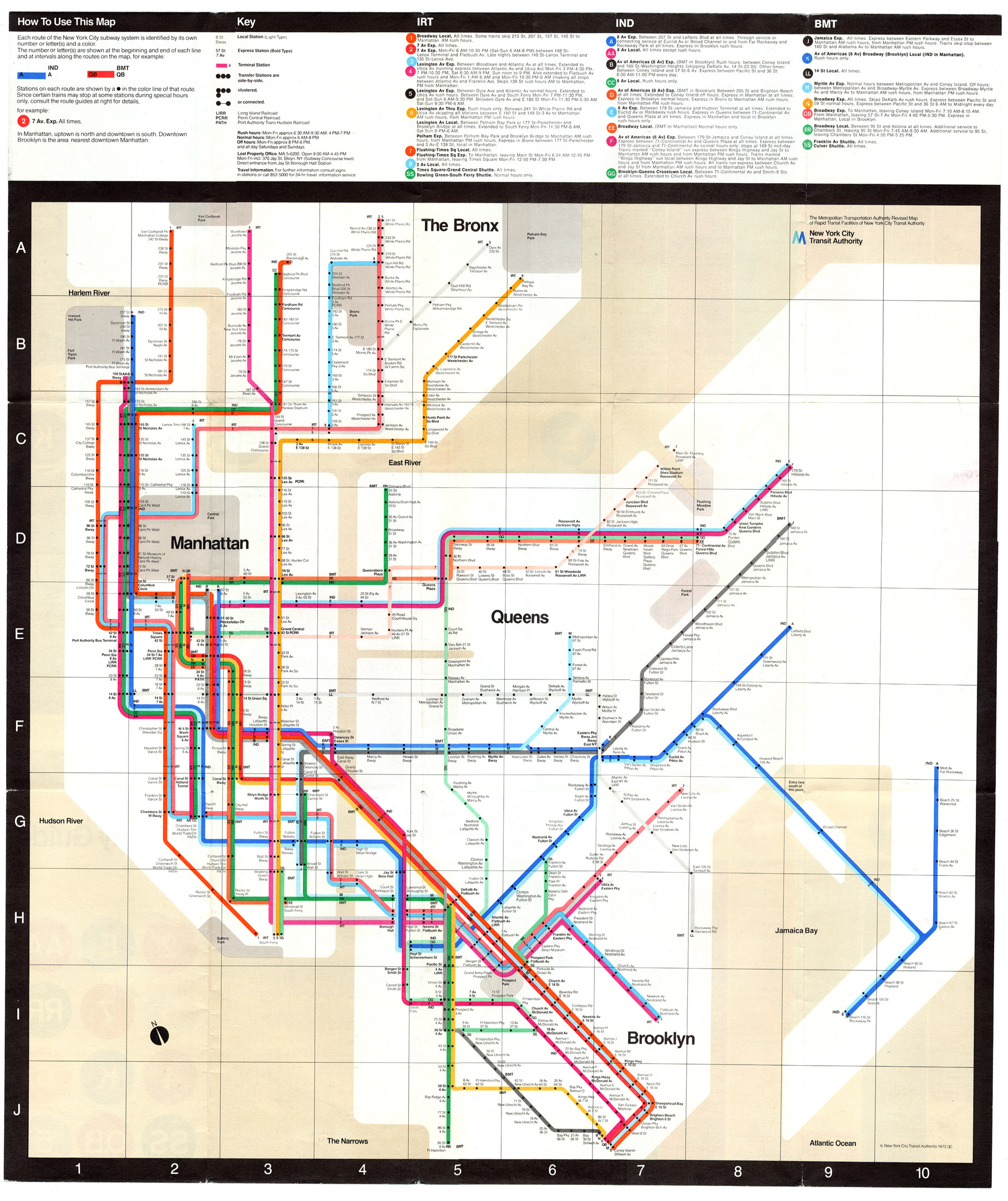 “It was,” he said, “a nearly canonical piece of abstract graphic design.”

But the map was replaced in 1979. The Vignelli version was found by many to be too severe. Some people didn’t want a diagram; they wanted a map that was more geographically accurate. And I suppose they wanted train lines to be a mass of overlapping strands of spaghetti rather than the clean ribbons I had gotten used to as a young art student. They wanted water to be blue, damn it. And Central Park should be a rectangle not a square. Yes, they wanted those elements we don’t see when riding underground to be literally depicted. Clean and simple information design gave its way to clutter and irrelevance, and gives us the map we still see everyday today. I remember a sense of sadness as the Vignelli maps disappeared. The experience of navigating the subway system began to reflect the ugliness of the graffiti bombed trains instead of representing the promise of modernity. That promise embodied in the Vignelli map was that amidst the ugliness and squalor that NYC was in those days, something as unexpected as a smart and beautifully designed subway map did have a transcendent quality to it. It said that things didn’t have to be as they were. It reminded us that even in these unexpected places, thing could be beautiful, and should be.

In Massimo’s own words, from the film Helvetica:

“The life of a designer is a life of fight. Fight against the ugliness. Just like a doctor fights against disease. For us, the visual disease is what we have around, and what we try to do is cure it somehow with design.”

I never heard the name until he passed, but as I see all the things he created I'm shocked to realize how much thinking and planning went into every little thing. Great design is surely timeless, I think I saw a similar quote from him somewhere on instagram. Great to see a tribute on SCN.  Love the quote mentioned above.

Thanks for you comments. Massimo really was a giant in the design world for most of his career and will be missed by the design community, particularly in New York where so many great designers passed through his studio.