A recent press release describes some new developments in the relationship between SAP and Microsoft (for example, Business Suite on Azure, etc). In her analysis of the announcement, ASUG blogger Courtney Bjorlin included one sentence that I found especially intriguing.

Not only will SAP support running its apps (Business Suite, ASE, All-in-One and HANA Developer Edition) on Azure, it’s in the process of developing integrations that will allow users to surface SAP data directly into Office 365.

I started to think about the potential of this combination and I considered the various ways that such integrations might take place. Being curious, I started doing some digging and found an interesting diagram that describes the involved architecture – of special interest is the lower right corner. 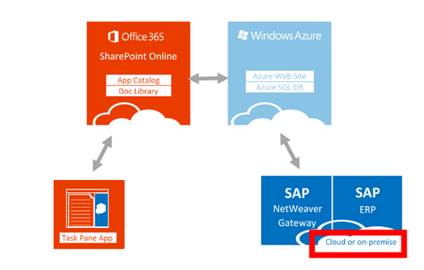 Usually, such integrations focus on OData sources that are located OnPremise (normally NetWeaver Gateway) (Indeed, the blog from which this diagram is taken provides a rather detailed technical description of such an integration) but here was a comment about OData sources located in the Cloud.

Note: The associated architecture is still changing and it looks like there might be a “SAP GWPAM Services for Azure” offering coming at some point soon. 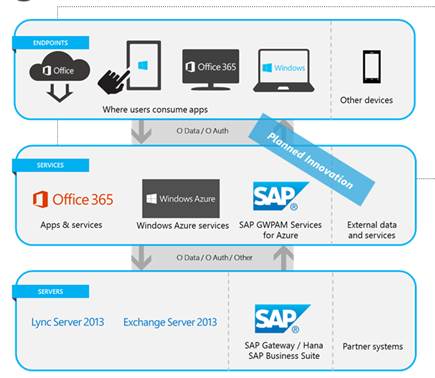 Continuing to dig, I found another reference:

Thus, it was evident that others had also considered such scenarios but I wanted to explore such use cases in more detail.

My first thought when I read Courtney’s blog and the sentence about Office 365 was about the HANA Cloud Platform-based Gateway as a Service.

Yariv Zur corrected me and said that the cloud service has a new name “HCI OData Provisioning” (details here).

Using the HCI OData Provisioning offering, what might be some possible scenarios? 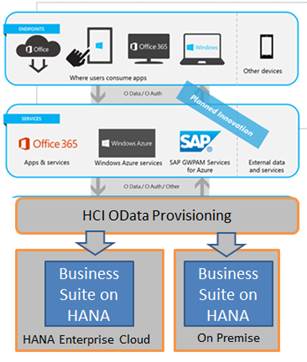 Yes, I know that it might be possible to connect Azure directly to the involved Business Suite environments but HCI OData Provisioning provides important functionality: “Customers using HCI OData Provisioning do not need to install a SAP NetWeaver Gateway hub system on-premise anymore. The installation of the non-modifying backend-enablement components of SAP NetWeaver Gateway are sufficient”.  [SOURCE]

Of the two possible scenarios I suggest, I find the combination of the Business Suite on HANA running in the HANA Enterprise Cloud (HEC) combined with Office 365 the most interesting in that customers could exploit the advantages when two of their core / fundamental  software environments are hosted in the cloud.  The use cases present in Duet haven’t disappeared from the enterprise and such scenarios in might find greater acceptance when they could be implemented without any or greatly reduced OnPremise  implementation costs.

Interesting read! The way I see it it's just a natural progression from Duet and another great HCP scenario...

great architectural diagrams as usual, but I'm not sure how to interpret this:

P.S. there's something going on with the SOURCE link.

great architectural diagrams as usual, but I'm not sure how to interpret this:

The text is taken directly from the HCI OData Provisioning help page.

What SOURCE link is broken?

Great blog Richard and thank for sharing some of this planned activities we have around SAP Gateway for Microsoft and the Azure service we are currently working on . You will get more news about it  soon and even be able to try it out this year.

We have released  a blog around SAP and Microsoft 365 on our new SAP Microsoft SCN community that you might find interesting. Holger is great a great source if you would like to dig in deeper  around our upcoming solutions around this topic.

Thanks for the "heads-up" about the upcoming announcements - I'll keep my eyes open and try and update this blog accordingly.