Over the last 4 to 5 years, the world has witnessed a meteoric rise of a variety of Over-the-top (OTT) messaging apps – both for consumers and enterprises.  Today, there are a dizzying variety of texting choices — most of them operating as “islands” (albeit some are exceedingly large – WhatsApp with over 500 million monthly active users [MAUs] is a prime example); however, in some markets such as the United States and Canada, SMS-interoperable OTT messaging solutions have garnered the majority share of OTT messaging apps (we call these SMS-enabled OTT messaging providers: NUVOs – for Network Unaffiliated Virtual Operators).

OTTs and NUVOs have provided a number of innovative features such as:

All of this has not been lost of mobile network operators (MNOs), some of whom had begun working on solutions that offer what the OTTs provide and more.  After all, MNOs are in a unique position in that they “own the network,” and many of its resources.  Either by partnering with providers and vendors that can provide a new breed of texting solutions or developing it internally, over the last year a number of MNO branded texting apps have hit the market.

A generic term for this is called cloud texting. This means the messages are typically stored in the cloud, associated with an account and/or a telephone number – typically the subscriber’s mobile number – and the service provides a number of unique features such as various messaging notifications as well as integration of other media.  It should be noted that in some cases, cloud texting has been closely associated with or is another name for the GSMA standard: Rich Communications Suite or RCS; however, cloud texting can be deployed completely separate from RCS or as a precursor to RCS (such as RCS-light). 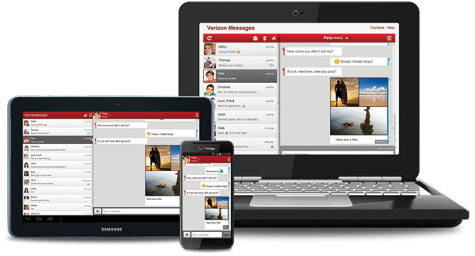 Verizon Messages notes that up to 90 days of messages are synced between all devices as well as the web and it is fully compatible with telephone number based SMS (including international messaging).  The service also provides tools to enable and expand on multi-media messages including collage, caption, and sketch features.  Users may also send audio messages directly from the app (on any device).

If App-store reviews are any indication, Verizon Messages is quite popular among its many users.  As I write this, Google Store reports 19,539 reviews with 60% awarding 5-stars and 23% awarding 4-stars.  Apple users are less generous, with a solid 3-star rating from 399 reviewers.  Of course, with Apple devices, users should disable iMessage, if they want to get the best out of Verizon Messages.  Additionally, any user (except, of course, the new HTC ONE users on Verizon Wireless) should disable any default texting app, so that all messaging traffic is delivered to the Verizon Messages app.

Verizon is certainly not the only cloud texting app provided as a branded service by an MNO. Telefonica Group launched Tu Go, over 1 year ago after shuttering the predecessor messaging app called Tu Me. 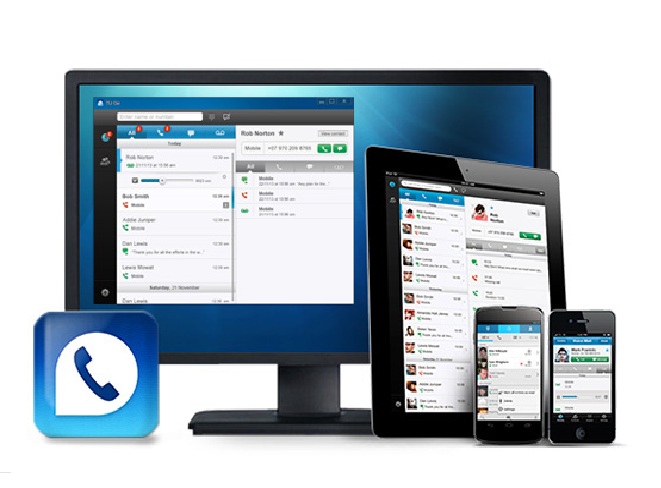 Tu Go moves beyond just messaging to include voice and voicemail functionality across multiple devices, connected to the subscriber’s mobile phone number.  Like Verizon Messages, Tu Go messages and calls are deducted from the subscriber’s bundle.  Tu Go is available on the O2 UK network, but their site noted that it will be available in other countries, soon.

Back in the USA, we also have Messaging Plus that has been making a splash over at Sprint.  Messaging Plus, while certainly a cloud texting app, is in reality, a full-on RCS ecosystem, supporting SMS-interworking messaging, high quality video calling as well as multi-media messaging, location sharing, address book integration (they call it “auto-friends discovery”), multi-device support and file sharing.  These are all elements of GSM RCS and in fact, Messaging Plus is an RCS implementation, powered by Jibe Mobile.  They just don’t identify it as such.

I think it was a good idea of Sprint not to specifically call-out that Messaging Plus is really RCS – instead, it is marketed as an incremental communications ecosystem for Sprint customers. Google Store users rate Messaging Plus 4-stars from 2,434 reviewers. Of that, 55% are 5-star and 16% are 4-star.  From the iTunes Store, Messaging Plus also gets a 4-stars, but with far fewer reviewers. One user even proclaimed, “Great fun better that WhatsApp!” 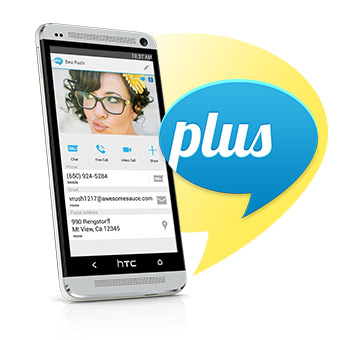 The only big drawback that I see with MNO cloud texting solutions today, is that none of them seem to differentiate between on-net (messages sent to another cloud texting user) vs. off-net (messages sent to a non-cloud texting user or user on another network). This would be analogous to how iMessage works.  When sending to another iOS device, the message flows over IP connections (OTT), but sent to a non-iOS device, it uses SMS (users know this as the blue conversation bubbles vs. the green conversation bubbles).  The iOS user’s messages going to another iOS device are not billed nor deducted from the user’s messaging bundle. The MNOs that offer cloud messaging charge for on-net messages in the same manner that they charge for SMS messages.  If they did away with on-net billing, with new, innovative pricing plans, they could potentially attract more subscribers to the service.  This could be supplemented by in-app upgrades and purchases for add-on features and capabilities such as emoji packages or stickers.

Around the world, there are other cloud texting examples and many more MNO RCS examples.  They are, but a drop in the bucket, compared to both pure-SMS and pure-OTT solutions in the marketplace today.  Messaging as both a person-to-person and social engagement medium continues to grow and flourish.  In my opinion, the MNOs are on the right track to launch new and innovative cloud messaging solutions that provide many of the features that OTT/IM ecosystems now offer.  SMS or standards-based messaging still has the edge when it comes to acceptance by enterprises and brands for consumer engagement.  In an RCS-based ecosystem to concept of engaging via APIs opens up several new and exciting possibilities for consumers to engage with enterprises and brands and vice-versa.  Cloud messaging can be viewed as an important stepping-stone and ultimately integrated with other types of communications media via a native app or even WebRTC.  This benefits both the end-users with new, more modern messaging services plus the MNO is in a position to create a better relationship with their customer.