A few people will no doubt think I’ve mistyped Mobilizer but I do indeed mean Movilizer.  I’ve recently changed jobs and moved to a consultancy who are working closely with the Movilizer mobile platform (we are a partner with Movilizer as well as SAP) hence I’ve been getting up to speed with its capabilities from a development perspective.  In doing so, I was quite surprised to find little, in fact zero, content and collateral here on SCN relating to the platform.  (Of course, I could just be falling foul of the SCN search, which as we know has it’s moments…)  No doubt many of us are already more aware of some of the other alternatives to SMP so I thought I’d do my bit to get Movilizer into the spotlight too.

(Updated 01.05.2014 – Whilst I was composing this post, someone has finally added something else about Movilizer on SCN!)

As is the way here on SCN this isn’t meant to be a ‘blog post for me to pimp my new employer or generate sales leads – instead I wanted to share my own personal first steps with the platform from a technical/development angle…  Having said that, there may be a little unintentional pimping as I explore the platform, for which I am eternally sorry 🙂

I think its fair to say anyone who is familiar with SMP will see a number of similarities with what the Movilizer platform is promising and aiming to deliver.  The stand-out difference for me after only a brief look at the Movilizer platform is how the approach to development feels quite different to my experiences with SMP.  The biggest positive is that quite complex and feature rich mobile solutions can be built in good old ABAP, straight in SE80.  Having seen some of the solutions already built by my new colleagues, as well as now understanding a bit more about how they got to that stage my initial reaction is to be very impressed.  It feels like I should be able to build a simple solution in relatively little time compared to utilising the SMP platform.  Let’s see… 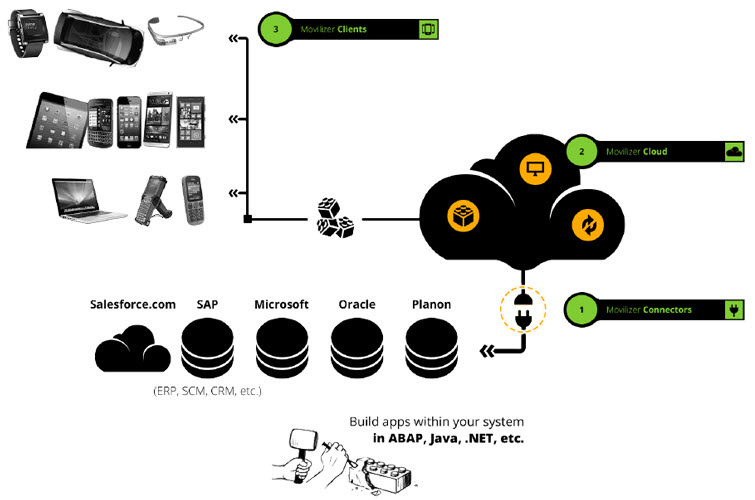 Just as a brief overview, here’s a shot of the general architecture of Movilizer pulled straight from their website.  To distil it down a bit to some key points:

Movilizer has a concept called Movelets, essentially the building blocks of their mobile app’s.  To use their own description:-

1 APP = 1 or N MOVELETS running on the Movilizer Client
1 MOVELET = 1 mobile process, a sequence of screens

So, in short a Movelet could be a simple single-screen approval task or it could be a multi-step creation process.  You can then combine multiple Movelets into one overall application.  This gives you the flexibility to make quite complex applications by re-using some Movelets and creating composite solutions.  The fact you can easily integrate Movelets originating from an SAP system with those from another system type means that you can get quite creative with your solutions.  There is even a specific type of Movelet, called an Intermovelet, that allows for integration between different Movelets to enable the re-use and componentisation.

Ultimately, a Movelet is an XML file that describes the screens, meta-data, and flow to the Movilizer client application running on your target device, as well as including any MIME objects or HTML needed to support your solution.  With this in mind, I suspect it would be perfectly feasible to create your Movelets and indeed full Movilizer applications by hand-crafting raw XML but where is the fun in that?!

Please, continue on to Part Deux where I’ll get my Hello World freak on…

For a really good overview of the Movilizer platform, please take a look here.

a little sidenote: Movilizer was actually started by a couple of Ex-SAP employees 🙂

I've had a chat with them in the past as well, to see if it would be interesting to partner up. My main problem is that there seem to be dozens of these types of solutions. (3I, Neptune, Movilizer, BSP plugins, etc etc...)

Especially after witnessing the constant changes to SMP. Investments in skills that you made yesterday, are obsolete today.

The idea of Movilizer is also that it's so easy, that you don't need a developer anymore (or at least, that was how they explained it to me)

Well, I'm always wary when someone makes such an argument (FPM was supposed to do that as well...)

But if that were reality, what would be the added value for the consulting partner? 😉

This is a very interesting mobility solution platform. I am just starting to understand this platform. Please provide more insight into ABAP development part with some more blogs on this topic.

I've just been reading Gartner's latest magic quadrant published July 2015 for MADP (Mobile Application Development Platforms) and noticed that Movilizer gets an honourable mention.  When digging deeper into the website for it, I see that it ticks many boxes for customers that want an affordable cloud-based solution and offline capability.  I'm finding that SAP's strategy for offline is still not clear, and isn't being delivered quickly enough (I've noticed offline Odata options appearing in the Hana Cloud Platform mobile services, but it seems to be in its infancy, whilst the on-premise Syclo approach isn't really the go forward architecture for offline to my understanding).

So that being said, wondering if you can share your opinions now that it is over a year since you published your blog?