In the previous two articles, I wrote about extending OData/SAPUI5 application. In this article I will cover the new Launchpad. All Fiori applications are generally displayed in the Launchpad as tiles. To be able to display the new enhanced application to the users, it has to appear as another tile on the Launchpad. I will create a new catalog and demonstrate how to add the new SAPUI5 project to it.

Begin with creating a new Launchpad via LPD_CUST. 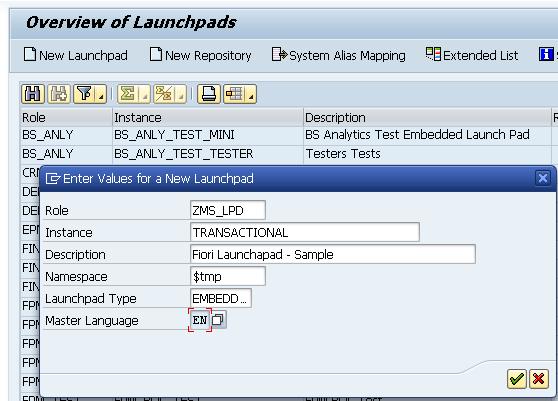 Add a new application with the below values. Ensure that sapui5.component refers to the name of the new component which was declared in the component.js file. In our case, sapui5.component=cus.crm.mycalendar.CUST_CRM_MYCAL_EXT. 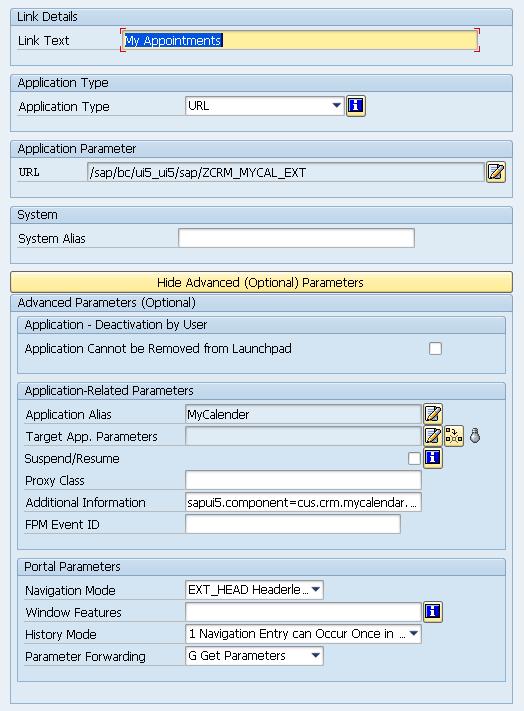 Next, open the Launchpad designer to create a new catalog using the URL http://<host:port>/sap/bc/ui5_ui5/sap/arsrvc_upb_admn/main.html?

You would see the standard catalogs listed on the left hand side. Click on the create icon.

Provide a name for the new catalog 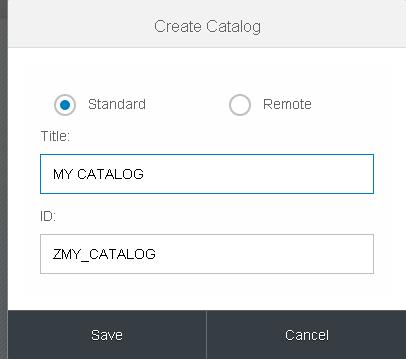 Click on the + icon which appears on the detail area 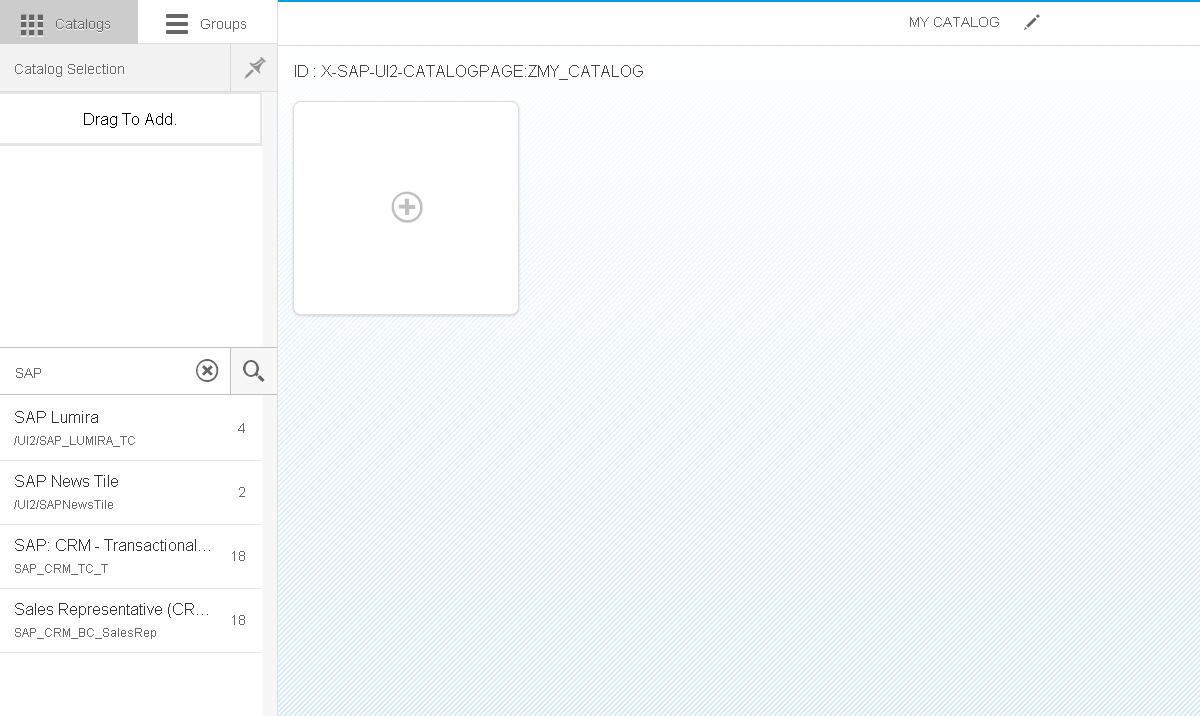 This will display a screen with four tile templates. The Dynmaic App launcher can be used in scenarios where you need to show a count on the tile (number of tasks to approve). I will use a Static App launcher for now and keep it simple. We will need a Target Mapping to be associated for each of the application too.

Add both a Target Mapping and App Launcher – Static from the below screen.

Before we proceed, we would need to maintain sematic objects for Intent based navigation.  In SPRO, navigate to “SAP NetWeaver User Interface Services” to add sematic objects.

Create a record with the object name. This will show up in the URL when the user navigates to the App.

Go back to the Launchpad designer and open the target mapping to maintain the below values. Select the Semantic object created above and provide a meaningful value for action. 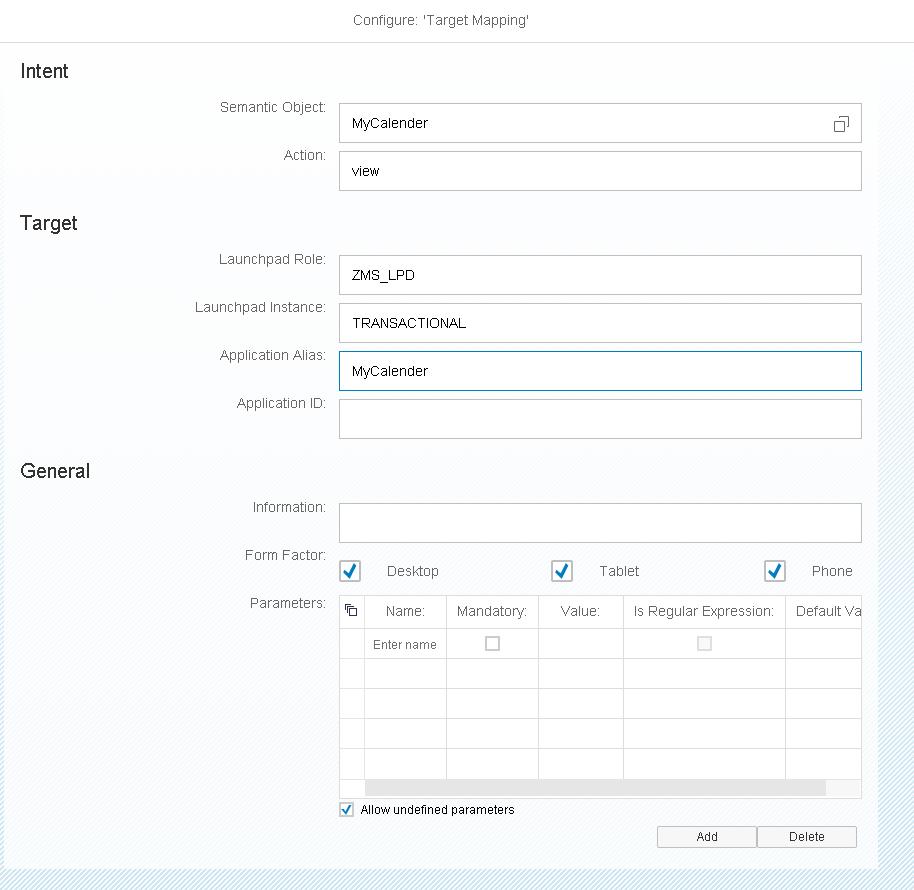 Provide the below values for the Static App Launcher 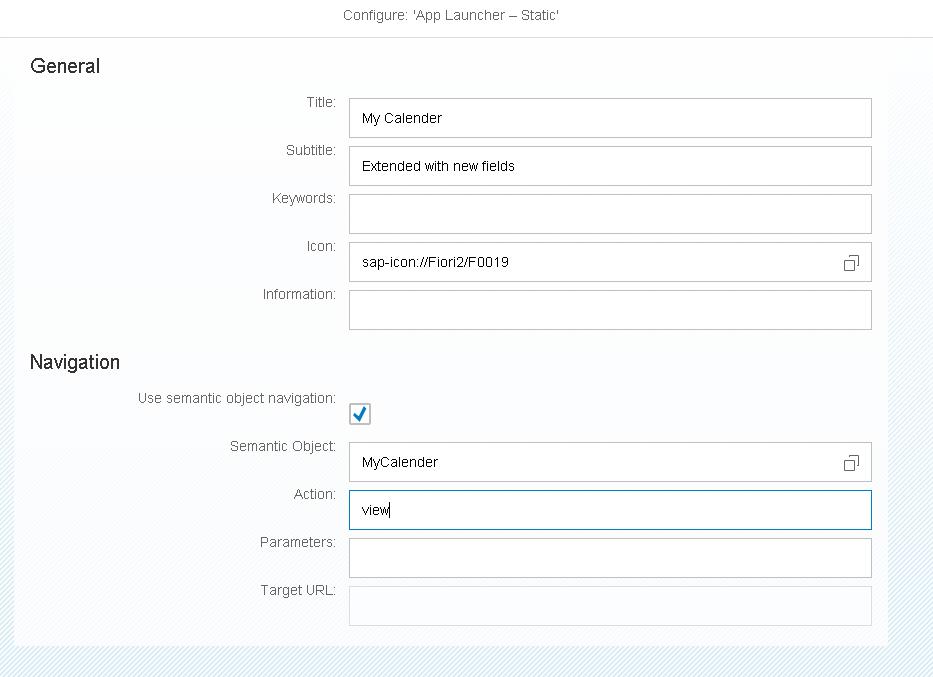 Now the catalog is ready for consumption.

In PFCG, we have to create a role which refers to this new Catalog. After creating a role, from the transaction drop menu, select the catalog. 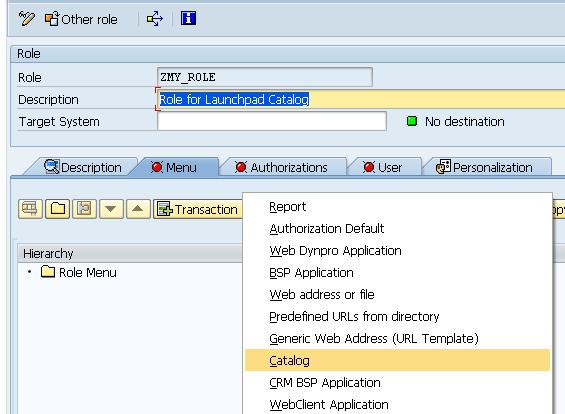 Assign the new catalog as shown below

Assign the role to the users. The role should look finally as below

Navigate to the Launchpad – http://<host:port>/sap/bc/ui5_ui5/ui2/ushell/shells/abap/FioriLaunchpad.html?

To add “My Catalog” to the left hand side, click on “Open Catalog” 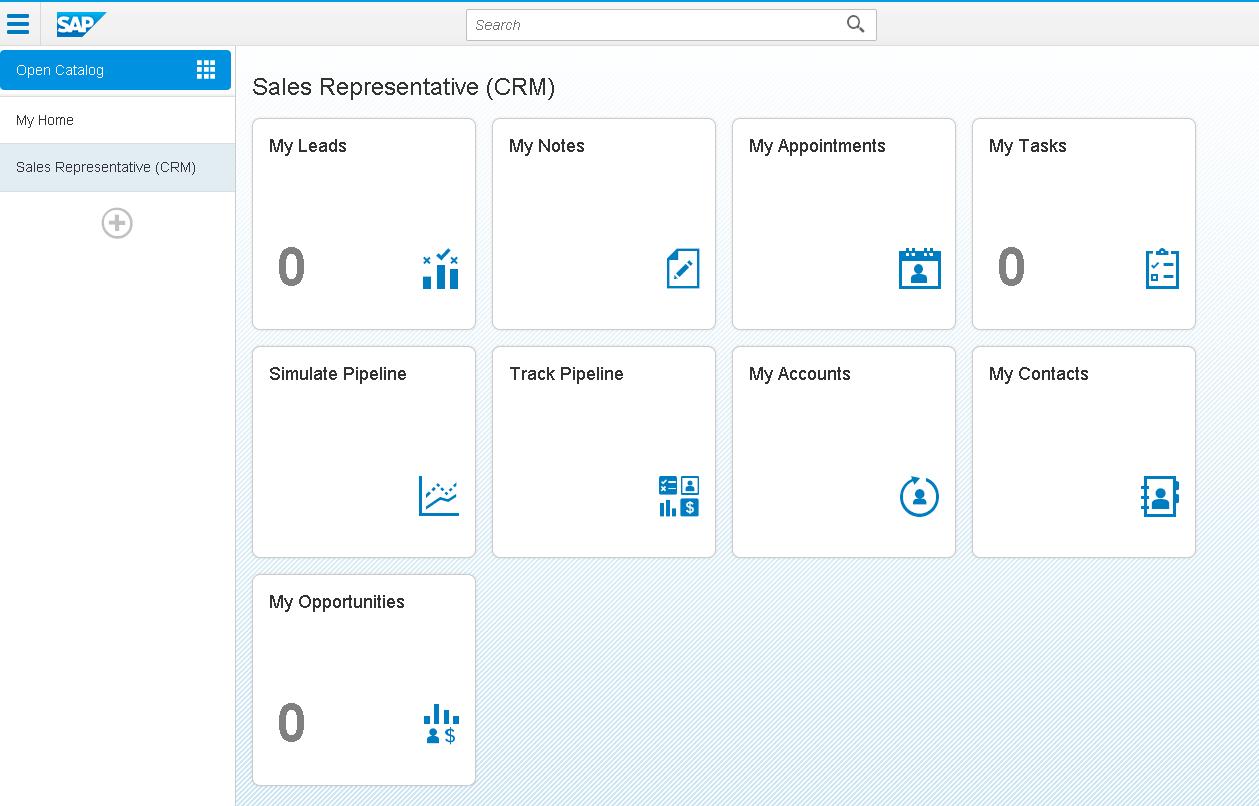 From the Catalog drop down, select “My Catalog”. This will list the single tile which is assigned to it. Clicking on the grey + icon below it will add it to the “My Home”.

I am using a chrome browser – developer tool (F12) to trace the calls being made. This way it is easy to verify if the new enhanced App is talking to my custom OData service.

Notice that the after launching the app, the URL will show http://<host:port/sap/bc/ui5_ui5/ui2/ushell/shells/abap/FioriLaunchpad.html?#MyCalender-view (referring to the Intent Navigation) we defined earlier.

To see the changes, navigate to the detail screen and look for additional fields in the bottom of the screen 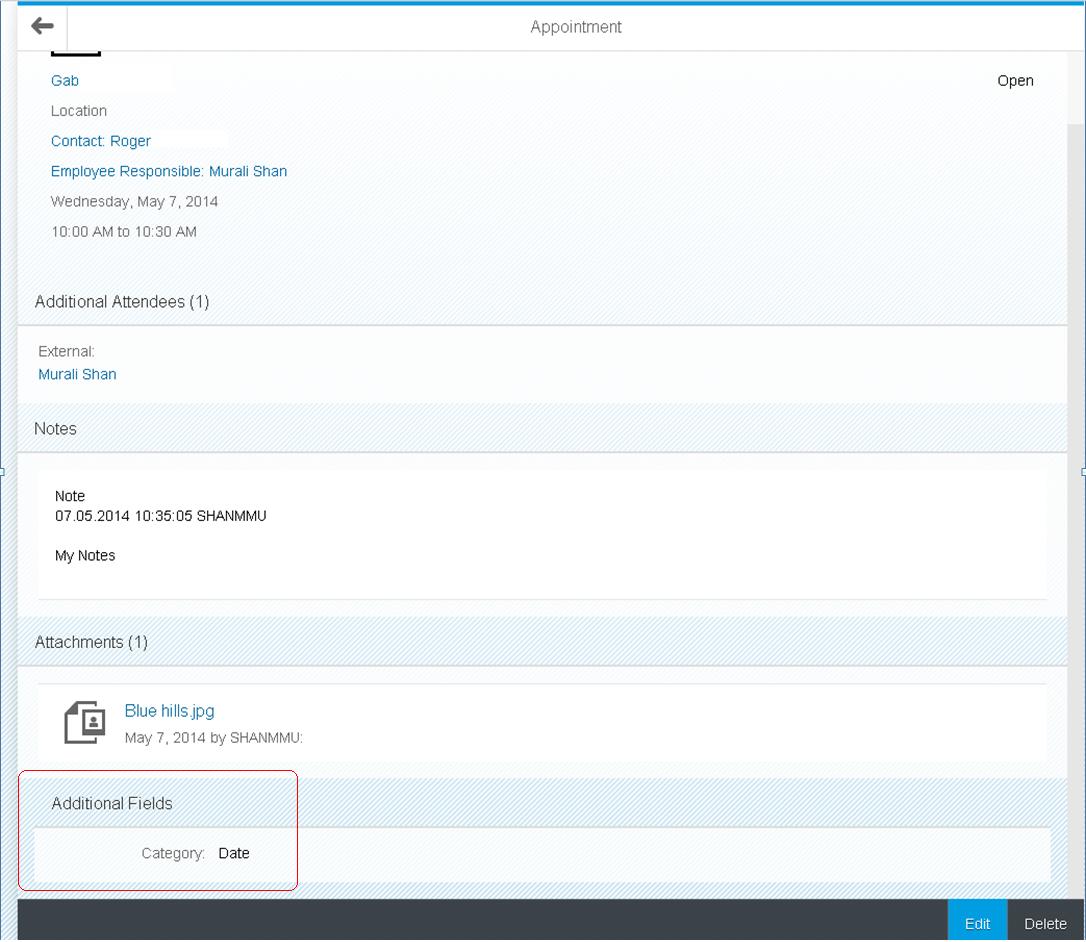 I hope the series of articles have given you a good insight on the tasks required to extend Fiori apps.

Update: Below are some useful documents on Launchpad and the concept around it.

Thanks for the for part 1  -  3. however,  I am getting an error which I have been battling with for days

When you "extend the standard app", semantic object and action should be same as standard app because other standard apps may call the app. "Application Alias" handles  this situation and your extended app will be called.

If the app is Fiori-like custom app, you can define own semantic object. 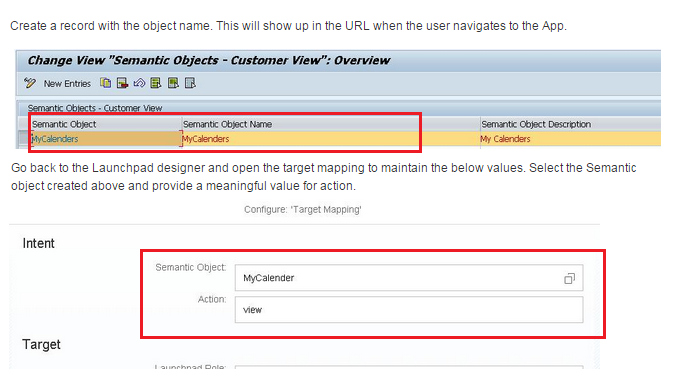 I guess then for this scenario a custom semantic object need not be created.But now i got my doubt cleared thanks Masayuki 🙂

I want to launch the application from lauchpad using the 'Semantic Object' for navigation.

Please give your valuable inputs. I am stuck.

Thanks! for the detailed explanation. This will be very useful for learners as well. Hoping to see many more such blogs. 🙂

this is really a great series of blogs. Helped me a lot to clarify some questions I had in the overall extension process.

I don't understand why we need to go for extension project and extensions . Instead of this , copy the whole application and changing is a better one right?

Please let me know if i am missing something..

I have followed your 3 Blogs on Fiori.. They are very Nice... Thank You very much

A big thanks for the detailed explanation, I have a standard fiori application and I have extended it with the help of extension hooks. Now I have deployed it(this app only contains my extended controller code and taking reference of standard app during run time) as a new bsp application to the abap repository and created new tile, catalog etc., configurations. Now, if SAP releases any updates to the standard app will those reflect in my extended app? If possible please share any document link from sap where can I find the ans to this point to show to my team.

Thanks Bhargavi, This blog is almost 6 years old. I would suggest you post this question in the forum. There might be a better way to extend apps now. Its been a long time I worked on Fiori apps.

Thank you for a detailed explanation.
Could you please tell me how I could use my own data from the table in standarte Analytical Fiori application?
Thank you in advance!

Thanks Ilya. Can you please post this as a question in the Forum? This blog is very old and there are new ways of doing the same.