Run Your Company like a World Class Soccer Team 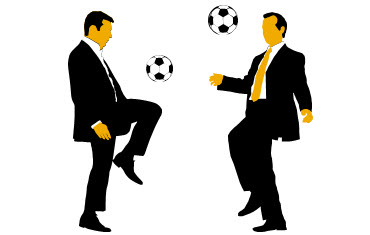 With this year’s soccer world cup in Brazil starting soon, all participating teams are currently finalizing their team rosters to make sure they have the right mix of skills and profiles in their teams to play a successful tournament. I actually find this process quite similar to the organizational setup of a company since this also requires the recruiting of highly talented and skilled individuals that complement each other and form a cohesive team. Let me share my findings with you by comparing the positions in a soccer team with C-level executives and their organizations within the company.

Chief Sales Officers and their sales teams are constantly chasing for the next opportunity to close a deal such as strikers in a soccer team are always ready to score the next goal. Both get a lot of recognition, fame and high rewards as long as they are successful but will also be replaced quickly if their efforts don’t yield any deals or goals.  Sales people and strikers are judged by a simple and number-focused definition of success: Sales figures (revenue, order entry, margin) and number of scored goals.

These two roles protect their companies and teams with the CFO’s relentless and diligent work to keep the company’s books clean and the soccer defender’s efforts of letting no opponent get to close to the own goal. Operating more in the background, both the CFO’s finance department and the defenders often do not receive the same attention that deal closers and strikers get.  Speaking in terms of top line and bottom line, sales people and strikers take care of the top line whereas the bottom line is managed by the CFO and the defender.  Both functions are essential as we can see in soccer: Without scoring a goal there is zero chance of winning a game and once a team has scored at least one goal (top line) it needs to simply make sure to concede fewer goals than scored (bottom line) to win the match. In simple business terms spending less than you earn defines a profitable business.

In the soccer stadium and in the corporate arena a lot of the activity is happening to keep the ball and daily operations moving. Midfielders and COOs handle this job, ensuring flawless execution, passing on the ball and connecting the dots from defense to offense and from top line to  bottom line. These roles need to be flexible and able to adjust fast based on a given situation while keeping an eye for the big picture and orchestrating their environment.

In each soccer team one player has the special role of the team captain, typically a talented and very experienced player who is charismatic, can handle the media during interviews and is trusted and respected within the team. The equivalent role in the C-suite is the Chief Executive Officer. Both captain and CEO can come from various backgrounds and positions such as the ones described before. The CEO sets the strategic direction for his company just as the captain decides in which direction to play in the beginning of a game after winning the coin toss. In critical situations the team will turn immediately to CEOs and team captains and expect their guidance.

Did we forget anyone? Yes, there are two more roles that we should have a closer look at.

And these two roles actually have a lot in common. Both are always present during the game, but often not visible and shown on screen. For both of them one mistake can change everything: With IT nowadays playing an important role in all processes, one failed IT project or IT security issue can cause dramatic problems for the entire organization and one missed catch can ruin an entire game for a goal keeper.  As a recent development both in soccer and corporate management, successful teams and companies use the respective role more strategically: The goal keeper becomes the 11th outfield player involved in the game setup and the CIO becomes an integral part of the corporate strategy. The best people in these roles embrace this change and define their role in a broader and more strategic way.  This represents a great opportunity for teams to take their game to the next level by using their keeper not only to stop balls and the CIO and the IT organization not only for commodity IT operations without being included in strategic decisions. More information about the new and more strategic role of the CIO can be found in this article about the Transformational CIO published by the Business Transformation Academy.  Quite a few outstanding goal keepers have been made team captain and I am sure by embracing a more strategic and transformational role, more CIOs will also be chosen for CEO positions in the future.

From my own experience both playing soccer in my youth and watching world cup tournaments, I can remember remarkable examples of great team work which proved that a cohesive team is more than the sum of its parts but often also outstanding individuals were able to make the final difference and lead their teams to success.  Now it is time to pass the ball on to you: What is your experience about the importance of the individual roles in soccer teams and corporations and the effect of team work and forming a team? If you have any thoughts, feedback or comments, please let me know. I look forward to hearing from you.

Tim leads the Global Management Office of SAP’s Business Transformation Services (BTS) organization. He joined SAP in the year 2000 and has been working for BTS since 2009. As a consultant he supported customers globally in Europe, Asia and America to succeed with their Business and IT transformation. Tim holds diploma and master degrees in Business Information Technology, is a certified Business Transformation Master and teaches as visiting lecturer. He can be reached via https://www.linkedin.com/in/timteinzer and followed on Twitter via @timteinzer.

Seems like many companies the CFO has to defend on perpetual offsides or "power plays" like in hockey.  CFOs wear a lot of hats and by this analogy cover a lot of ground on the field.

Thanks, Bill. Great to see how you transfer this analogy from soccer to hockey. Indeed lots of work for CFOs these days and soon we will see a handover from the SAP CFO after 13 years to an excellent internal successor.

Thanks to all readers for your feedback and sharing via various channels!

If you enjoyed reading about soccer and business I recommend my follow-up post:

Supervisory Board, Referee and Fans: More Parallels between Soccer and Business